Going back to Penang over a long weekend can be a highly stressful affair. The mob of out-of-towners is inevitable, as are the traffic chaos and wreckage to one's overall sanity. I was intent on staying within the compounds of home throughout my trip, where my lovely folks and the cat reigned serenely.

However, inundated by guilt and remorse from unceremoniously passing out on a gathering the night before, I found myself out and about, cursing at foreign car plates on the road, heading to lunch with Hui and Nessie for a overdue catch up sesh. We were in the mood for Thai and Hui had sharply spotted the new joint, Sirarom on Gottlieb Road, opposite Phor Tay High School. 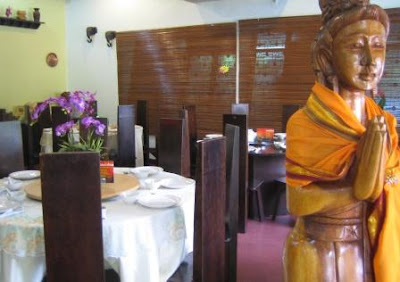 The interior was calm and unruffled, as tranquil as Dad's koi pond, when I entered and I was immediately placated. 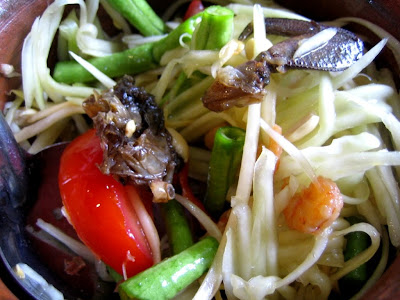 We start with the requisite Som Tam (Papaya Salad). The version here featured raw preserved crab (also known as pu kai dong) which took a bit of getting used to. I felt they could've upped the spice easily by another notch but the freshness and crunch got us started on a good note. 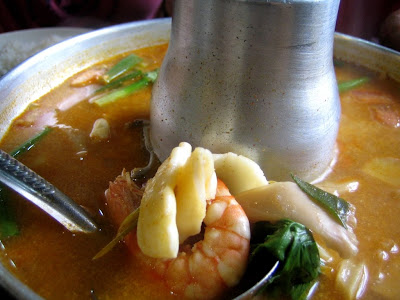 The Tom Yam Talay (Seafood) induced much joy but again, I think they played it safe in terms of both the sour & spice notes. The fresh seafood was generous enough and we lapped it up with gusto. 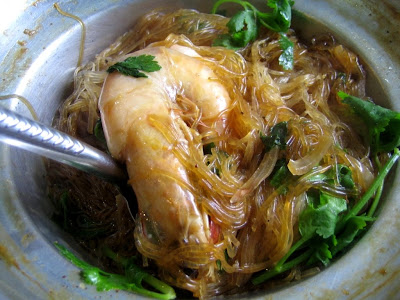 The Kung Op Woon Sen (Claypot Vermicelli with Shrimps) was a radiant centrepiece - well-flavoured and moist vermicelli coating four huge-ass prawns... not sure why they underplayed the crustacean size but shrimps these are not! 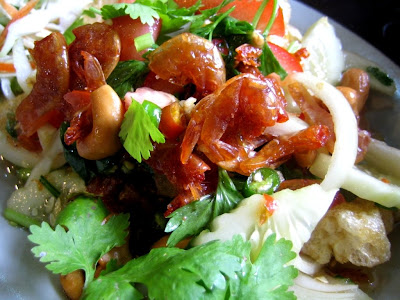 Our next salad Yam Sam Krob (Crispy 3 salad) arrived next featuring a bevvy of crunchy beauties. The cashew nuts, dried fish maw (which replaced the dried cuttlefish that the menu had listed) and dried shrimps were mixed in a citrusy dressing. Refreshing, but not exactly remarkable. 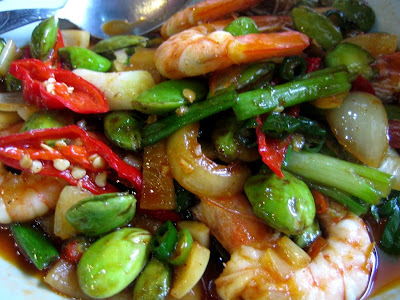 We went a bit overboard with our orders, thinking Small meant we could sample more. The Small portions come enough to feed four, and between the three of us, we had to marshal the last vestiges of gluttony to sweep the table clean. The final dish of Tomyam petai with shrimps satisfied with plenty of those stinkin' beans and fresh shrimps. 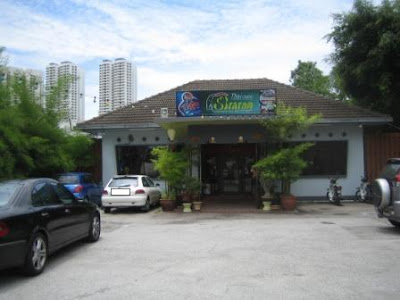 We stumbled out into the pleasant Penang sunshine, happy and fulfilled. A great Thai meal, all in all, with the bill coming to about RM85 in total. Located next to Bagan, Sirarom offers plenty of parking. I foresee that if they keep their game of unstinting ingredients up, it's only a matter of time before this place draws in the crowds who will leave with their thumbs up.
Posted by minchow at 9:50 PM

I never come across the Thai restaurant there. The food looks good. Btw, how much was the damage there? If for budget I will need to bring you to other place already.

ooh, intriguing twists to some of these dishes. i lurve petai, but i've avoided it for years because of what it does to the odour of one's errrm liquid waste product secreted by the kidneys...

The grub looks awfully authentic. Closer to the border I suppose! RM85 was a very very reasonable price to pay for a mini banquet like that...

I wish teleporters have been invented. I would teleport to Penang and grab myself some of that awesome food.

We trust the Thais as long as we can remember, but sometimes they are a bit sour while a few are too green . Nobody's perfect , right ?
haha

I like the Gung Ob Hung Sen. Shrimps! The roots of coriander and the lard pieces anchor at the bottom of the pot. Yum.

eh that's rather cheap, IMO.
thought it should be in the realm of RM100-RM150, with the tomyam and claypot vermicelli and PRAWNS. :)

i heard alot of horror stories of the traffic to penang..a quiet place for a meal would b the perfect remedy indeed

Shrimp? They look more like sang har to me! Great find, huh? =)

raw preserved crab eh.. must have been really stinky. I like!

I'm not so much of a big fan of Thai food, Rachel loves it!

RM 85 is quite reasonable to me, there's quite a few prawn dishes.

The restaurant looks so nice and also the food looks actually quite good :)

looks good :) gonna have Thai meal this week for sure! hehe :)

Steven, me neither! So glad my friend spotted it. Eh RM85 for all those prawns... cannot complain right??:-P

Sean, oh yes it does stink up the loo but I'm quite happy to put up with it.. too much fun when you bite into a whole petai and it hits the palate!

Paranoid Android, I can safely say that Thai food in Pg is as good as it gets in M'sia! Oh no wait, I've hardly tasted Thai in Kedah and Perlis though, so I should aim for that next!

BSG, yes there's little to dislike about Thai food! Even the oversoured and overgreen one!

Worldwindows, I was absolutely bowled over by this dish too! It wasn't my first choice but it should be everyone's!

J2Kfm, yes it was CHEAP! Worked out to only about RM28 per pax, and we had a feast!

Joe, imagine my relief when I stepped into the empty cool interior of the restaurant after almost road raging it outside!

Bangsar Babe, exactly! They were huge. And very fresh. This type of finds are far and few in between but once I stumble upon them, totally remind me why I blog!

Ciki, trust you to pick out the stinkiest element of the meal! ;-)

Rachel, the papaya salad has been done better elsewhere I think but overall, this was a lovely (and very affordable!) meal.

Selba, you said it in a nutshell!

BBO, it's one of the best Thai meals I've had in recent years! Barring the one in Bangkok, that is!

Christine Leng, where where?? Be sure to blog about it?! I still need to hunt for my ultimate tomyam in KL!

I think it's reasonable with RM85.