The Solace of the Slaves at Sin Kee, Brickfields

Some weekday evenings, I step out of the office and blend right into the parade of the battered and soiled, having clocked another day of being a functioning, serving member of society. On these nights, I can turn only to food that takes me back to age 7, when being functional was considered a precocious trait, not a prerequisite.

Sin Kee, an establishment as old as Conformity itself, reaches out to derelict, empty souls pining for our weekends, our secret projects and predilections. Fat Tulip and I arrive on Tuesday evening to a near full house of hungry folks with that haunting vacant stare, made even more unrelenting by the stark fluorescent lighting. 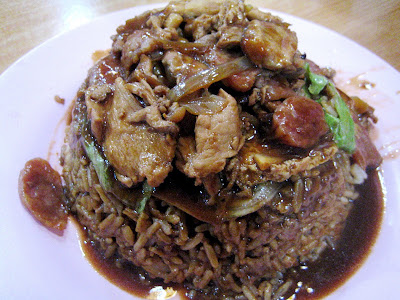 The Mun Fan (Stewed Pork Rice) comforts as the worn bowl is lifted, unveiling rice laced with the goodness of pork, Chinese sausages, egg and lettuce. On any other night, I would have turned my nose at this because this isn't a spectacular dish by any means, but it's a brand of soothing therapy to the bitter working class like no other. 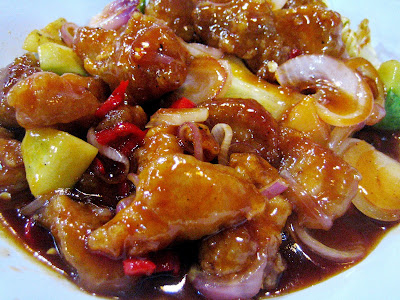 I can't remember the last time the Sweet & Sour Pork made an appearance on my plate but I order it instinctively, assailed by the memory of the same dish being lovingly prepared by Mom for us three pesky, picky kids. While this revives us somewhat, we struggle to finish the huge portion of battered meat. 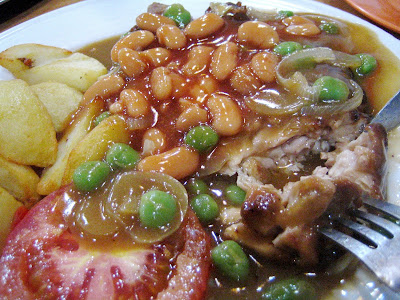 The Chicken Chop is a delight, boneless tenderness doused in brown gravy and baked beans and home fried potatoes. The weekend doesn't feel THAT far away now, we think. 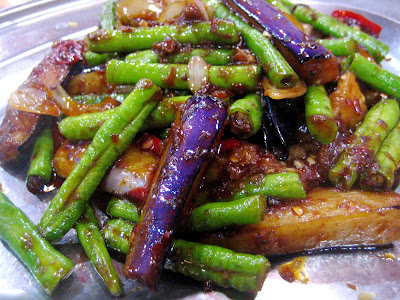 We finish with a perfunctory vegetable dish, Long Beans & Brinjal in Sambal. This is too oily and too robust for our liking for by this time, we have too many different flavours on the table confusing our humble palates. 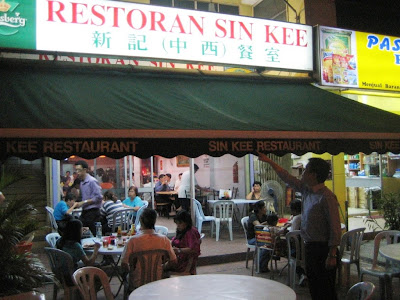 Fat Tulip pays his respects as we depart to seek solace in our fitful sleep. It won't be the last time that we will need Sin Kee's nourishing, almost parental embrace.

I Just Wanna Get Along at Blue Cow Cafe, Plaza Damas

When I was thinking for an opening hook for this post, I thought only and only of this one song.

"We were rich once
Before your head exploded" 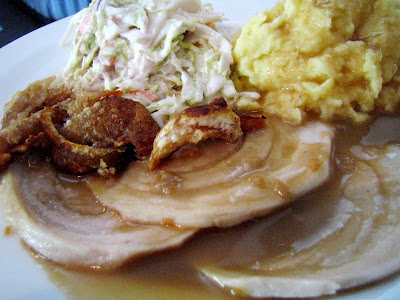 The Roast Pork served with a huge dollop of coleslaw and mash on that Saturday morning was handsome and induced happiness.

"Imagine doing what just the Big Bang did" 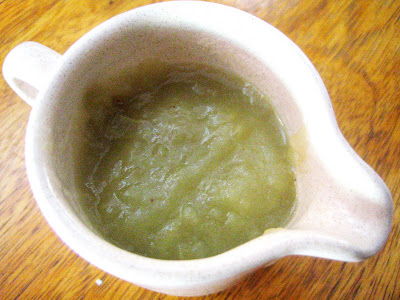 The Applesauce that came served in a separate jar was tart and tight, elevating the Roast Pork to new possibilities.
"The whole world knew it was loaded
Wave bye bye cause it ain't ever coming down now" 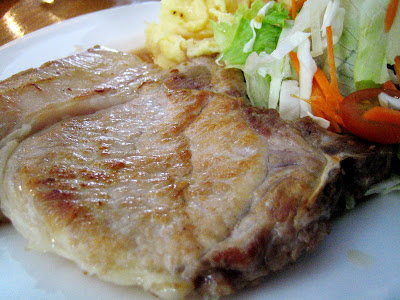 The Grilled Pork Loin, a little less profuse in flavour and tenderness, simmered and sulked, demanding for more attention and praise. The tougher material was challenging to work with but we gave it all we had and placated the raging victim within. Just for a short while though.
"I just wanna get along" Jeng-Jeng! 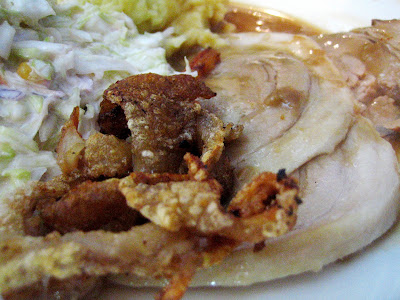 I returned to the crisp comfort of the Roast Pork and surrendered with a sigh.

"I look up
The heads fly over
I see a boy I know
His hair's on fire"
The pilgrimage of pork that sussed out this and that happened at:
Blue Cow Cafe
N-1-4, Plaza Damas
60, Jalan Sri Hartamas
Tel: 03-62013206
"The whole world I discovered
If you're so special why aren't you dead"
The tune's "I Just Wanna Get Along" by the Breeders. Listen here. Pretty awesome eh?
Posted by minchow at 9:10 PM 23 comments:

Speed and Happiness at MOS Burger

While Japan is home to one of the world's most prized native cuisines, I have no shame, not a shred siree, in admitting the pure unadulterated joy I get from the sheer abundance of fast food ideas borrowed from the big bad West, moulded and significantly amplified. 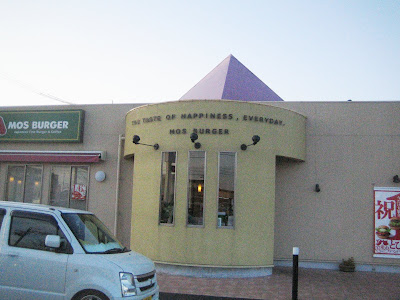 "The Taste of Happiness, Everyday, MOS Burger" says the sign. Damn right. Once upon a time, Malaysians enjoyed local presence of MOS Burger. As we did racial harmony and meritocracy. Alas, our happiness was short-lived for they pulled out, leaving us only with inferior interpretations of fast food for an industrialised nation. Come back, you hear, come back!! 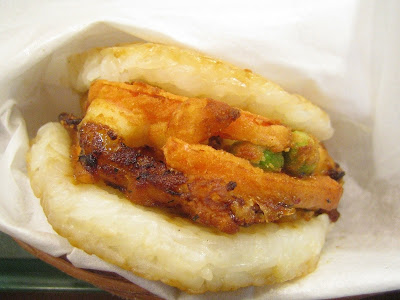 We arrived at Tennoji station in Osaka one morning, famished for something traditionally Japanese like soba or onigiri, but we hit the MOS Burger outlet that greeted us right after we got off the subway. I went for the Kakiage Rice Burger and it hit the spot. There is something so right about that rice in the morning, lightly browned and crisp, sandwiching a juicy, flavourful vegetarian patty. 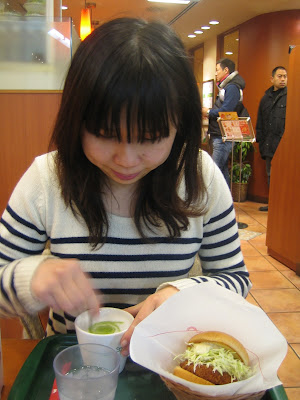 My lovely sister Kah Bee discovered Green Tea Latte for the very first time this particular morning (she resides in NZ and abhors Starbucks). She's not looked back since, and unfortunately, resigning to the annual visit to Starbucks in Auckland to get her fix. 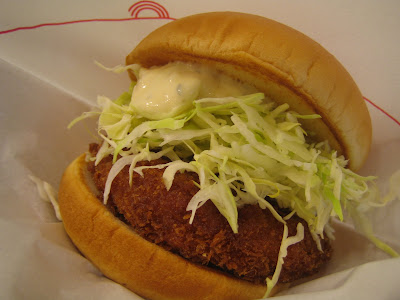 She enjoyed her Shrimp Cutlet Burger, but look, who wouldn't?? Tell me you don't want to take a chunky bite out of this beauty first thing on a winter morning? 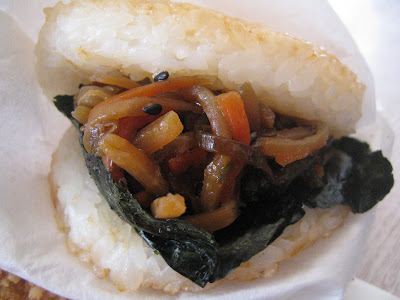 We went back to MOS a couple more times over the course of our trip in Japan. During the retail slumber period of the New Year, I dug into the Kinpira (Burdock Root & Carrot braised in soy) Rice Burger for a late breakfast. Wrapped in fresh nori, this instilled HOPE in 2010. 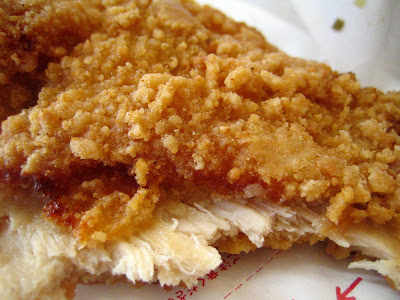 Of course, it's not all dietary fibre that makes fast food legit in Japan. They also make first-class comfort feed like fried chicken, in the form of the MOS Fried Chicken Cutlet. Feeling a little low about starting another year of failings and wailings? This will have you covered.
I am not sure what it takes for the franchisee to wake up and smell the damn green tea latte, but Malaysia needs its MOS! Over and out!
Posted by minchow at 9:20 PM 18 comments:

Organised retail is a tough call. On one hand, our heinous traffic/public transport conundrum presents a commercial case for the ongoing erection of these mercenary all-in-one monoliths.
But sticking in air-conditioning and opening the shutters are hardly sufficient to convert window shoppers to serious ones, given the stiff competition and growing disdain for these hastily built but ultimately malfunctioning edifices.
Zouk Cafe & Bar at the Gardens in Mid Valley is an example of an outlet with failed potential given the captive traffic who work in the vicinity and starved for choice to wind down on a Friday evening. 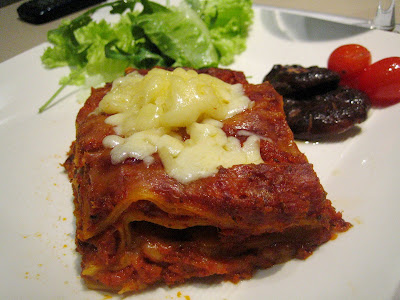 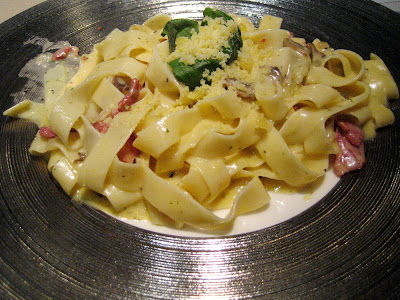 Fettucine Carbonara got an indifferent "Creamy" from meal owner, but only because she was well famished by the time the pretty gleaming plate was set in front of her and had no inclination for verbal expression. 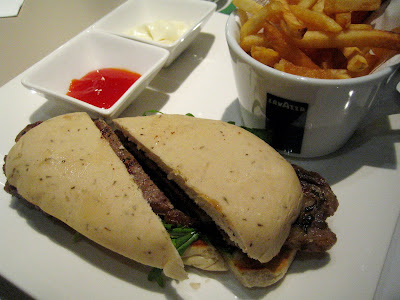 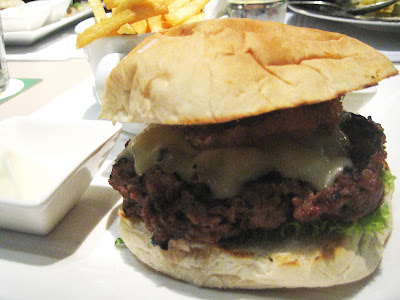 The Cheeseburger, a far cry from the Ramly outside a 7-Eleven I had later that same evening. 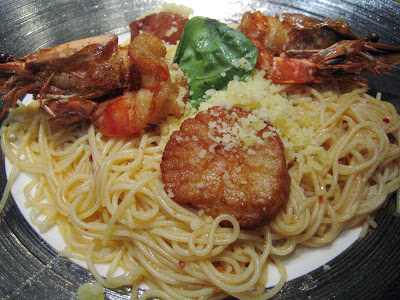 The Seafood Alio Oglio, which was served with thoroughly dessicated scallops. Not the way the mighty Creator intended for this mollusc to contribute to the food chain. 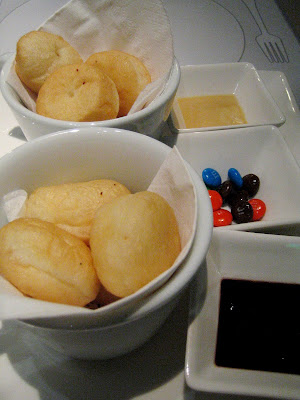 The Doughnut Dippers were hilariously stale and colourless. No one was in a hurry to try this. 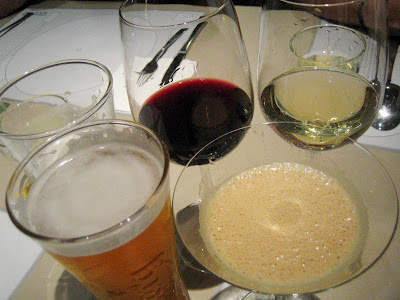 Happy Hour beverage prices currently apply only for Carlsberg and house pours.
A disappointment, as with most mall outlets, saved only by the dependable camaderie of battle-scarred colleagues. Next time, we'll know better to get into our vehicles, fight the traffic out a little further for a better class of merrymaking.
Posted by minchow at 2:40 PM 18 comments:

Sometimes the body just needs to slow the eff down. And no, sometimes it's really not an option regardless of what work deadlines are looming or I'm inclined to have one more night out. When I blithely refuse to take heed after a few weeks in a row, the body will retaliate, I've learned. But enough about that, I've had enough loopy and lonely monologues justifying my feeble, febrile condition while detained up in recovery.
Rewind to weekend pre-Illness: habitual breakfast hunt after noxious, hard drinking nights. This particular weekend saw a couple of tasty, under-the-radar, relatively unknown but solid Pan Mee finds. 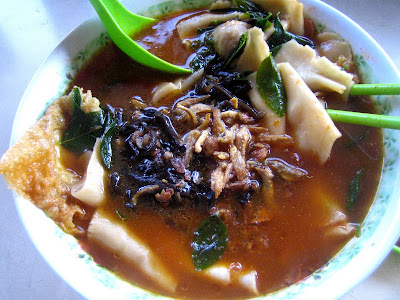 First up - Medan Selera at end of Jalan Penchala, near PJ Old Town. I went for the Spicy Soup Pan Mee (only hand torn ones for me!). The soup arrived sour, not quite the jolt of a good tomyam but nevertheless an invigorating wake up call. It was the first of this variant of Pan Mee I'd seen, and not a bad one at that. 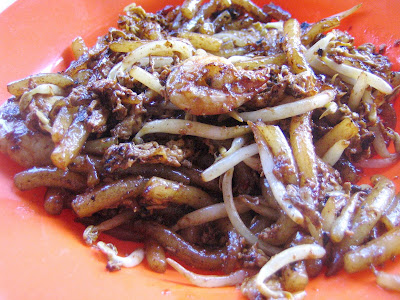 My companion had engineered the visit here for the Fried Lou Shu Fun, a gleaming plate of lard and Aunty wok power. Very inspiring stuff. Aunty also offers the same treatment to koay teow and noodles. 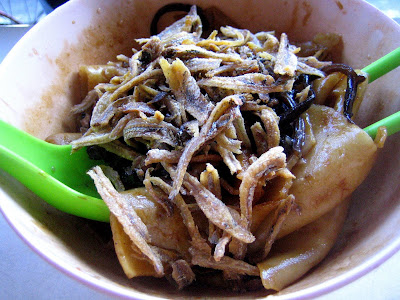 Upon seeing the fun I was having with my meal, my companion, a non-Pan Mee believer, ordered the regular Dry Pan Mee. I found it well above average (and I've tasted a LOT of average Pan Mee), a perfectly balanced rendition of soy, crunchy anchovies, wood's ear fungus and minced meat. The hand torn noodles were also a nice, buoyant bite - not too thick that it feels like biting into a shapeless mass of starch. 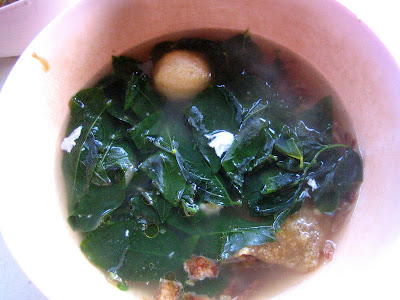 The accompanying bowl of anchovy-based soup featured my favouritest colour. Tasty too! Subsequently, I found out that there's a popular Pan Mee stall not too far away from this food court, off Jalan Penchala. Next time in the area then! 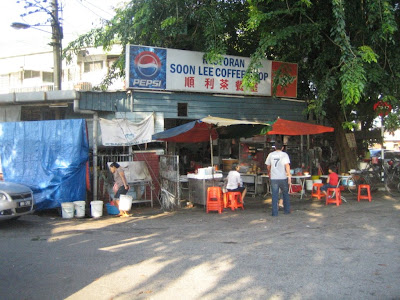 The next morning, we found ourselves back again in PJ Old Town again, at Soon Lee Coffee Shop. 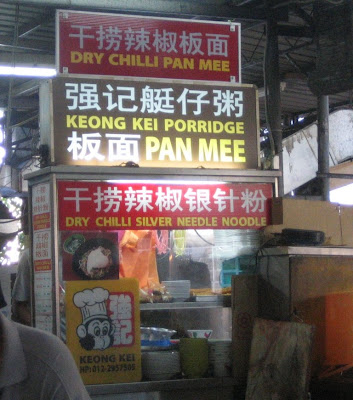 I was spoilt for choice but got drawn to this stall. Maybe it's the monkey wearing the chef's hat or maybe it's the prospect of tons of fiery red chilli but I found myself with yet another bowl of pan mee. 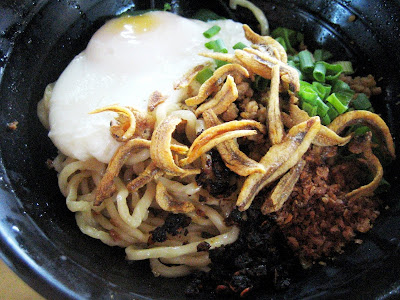 Now I join the legions of Chilli Pan Mee devotees who have been disappointed and disheartened by the likes of Kin Kin and Super Kitchen. Perhaps, I'd retuned my expectations so to not suffer the same blow but Keong Kei's Dry Chilli Pan Mee was more noteworthy than its distinguished peers'. 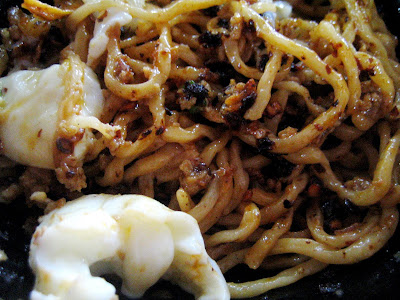 O' lustrous yolk, extra serving of radiant rogue, a vigorous toss and I am yours!
Soon Lee also houses a koay teow soup stall which appeared to be doing very brisk business the morning we were there. The Char Koay Teow stall in the evening (different from the one in the morning) is apparently also pretty decent.
Posted by minchow at 1:15 PM 17 comments: