My pork-eating days are numbered. I have been laid into some of the most persuasive literature for a meatless diet that I feel I would be doing the conviction proffered by the writers injustice if I didn’t at least try to revisit vegetarianism one more time.
So while I prepare myself for this potential switch back to vegetables, pulses and maybe, just maybe, a selection of mock meats, I am clocking in hazy, meaty jaunts with my favourite cuts.
Such as this recent jaunt to everyone's old German-Swiss favourite Euro Deli in Damansara Kim. We arrived on a Sunday evening, hungry from having performed zero to minimal brain activity all day and with nothing on our mind but pork. I flipped open the menu and immediately called the Mixed Roast Platter which featured a cut of the pork knuckle, ribs and belly. My friend conceded defeat and decided to have a go at the burger instead. 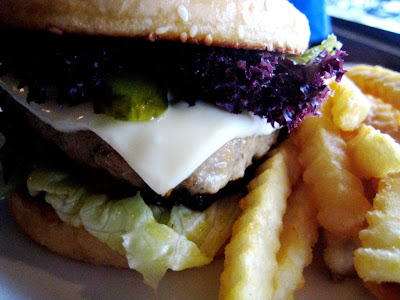 The Swiss Burger (RM19.50), OK to look and taste but ultimately inadequate. When you’re in that Sunday devil-may-care frame of mind, you really don’t want to stop your pork ritual at just a burger patty sandwiched between bland buns. 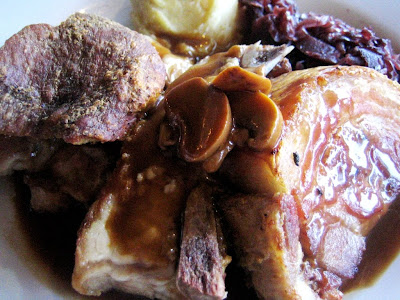 My glistening Mixed Roast Platter (RM32) of pork cuts arrived, doused in rather generic brown gravy. Let us study exactly what this platter proffered. The plate was topped with one crispy cracker of pork skin, perfect snack while watching repetitive plotwork on Californication (how many times can someone screw up screwing randomly?) or hell, just lying in bed on Sunday as per usual absorbing absolutely nothing at all. 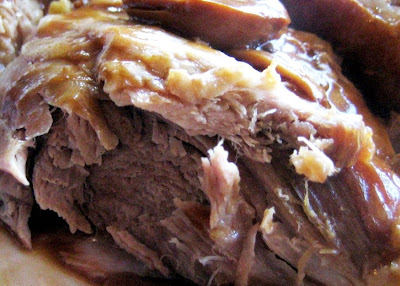 Knuckle was tender and yielded to knife and fork easily, but I have had better. Not sure if it’s entirely a matter of taste but I feel knuckle needs to be consumed whole and when it’s served as a dainty cut as part of a sampler, it fails to convey to the innate beast in us. 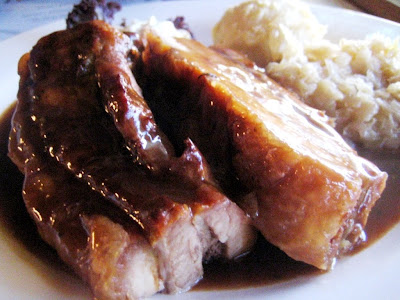 Ribs were tougher and gamier than I like but they were fatty enough to inspire my friend to go for a second helping of Roast Pork Ribs (RM29) after his burger went down too fast. 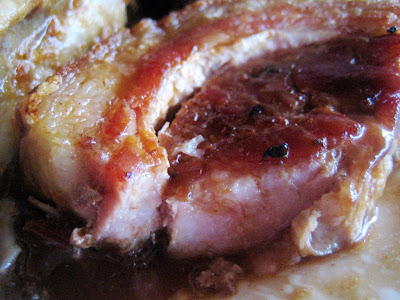 The belly I liked was, for the crisp, deep rust edges and more pork skin, burnt and spurting fragrant juices. I would absolutely need to return for the rolled pork belly on its own. The Mixed Platter, while handsome in abundance, just doesn’t impart the necessary focus on the individual cuts of meat.
While the precise number of pork-eating days left is questionable (I’m thinking a big 6-figure timeline, depending on how fast and furious the literature keeps coming), I think I have a couple more visits to Euro Deli left in me before the Meat-O-Meter is tossed into the bonfire.
Reservations are recommended. The place has been spruced up real nice since my last visit - there's even nice woody bar out back where I can imagine knocking back a bottle or two at my next pork outing.
Euro Deli Shop
41, Jalan SS20/11
Damansara Kim
Tel: 03-7726 7495
Posted by minchow at 2:00 PM 20 comments: