Tis the Season for Katsudon Perfection

Warm Greetings for the Holiday Season!

Eating and drinking in Japan to wrap up another year of great (and not-so-great) eating comes pretty close to perfection. We've eaten tons in the past week and I fear I will never get around to sharing everything in the detail that the experiences warrant. However, I didn't want to forget this, the last meal we had before we departed from Osaka yesterday for Xmas eve dinner back at Mag's. 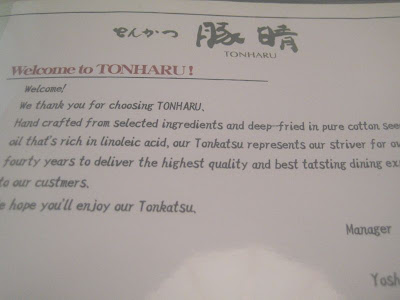 Tonharu is one of the many tiny food joints lining the underground arcade of Namba station, one of Osaka's main transportation stays. The place was packed with hungry and grouchy salarymen, a sign of good things, surely. Every table was tucking into one combo tonkatsu dish or another, served with rice and steaming bowls of miso soup. 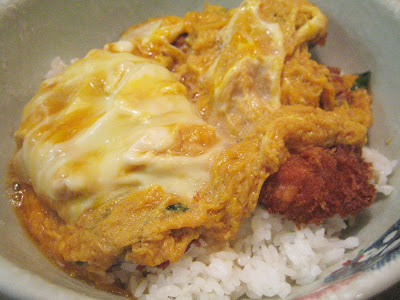 Both of us ordered the Katsudon (840 Yen each), one of the most substantial rice bowl dishes known to mankind. We knew we'd done right by our tired and hungry selves when both bowls arrived, wobbling in gleaming, golden glory. 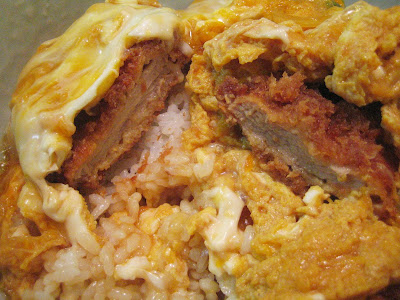 The dish is standard deep fried pork cutlet, on top of rice with gravy and smothered with a runny egg topping but Tonharu's version was the best we've had to date. The pork cutlet was thicker, crunchier and the fail-safe rice-gravy-egg mixture a heartstopping rendition of all things right for the season - warmth, substance and delicacy, wrapped in love.
We made the train and back in good time to cheer our first of many glasses of bubbly with Ollie, Mag and Taka.
May your holiday season be filled with many moments like the one Tonharu's Katsudon offers. A very Merry X'mas and a Happy New Year to you, you and YOU! See you next year!
Posted by minchow at 4:35 PM 17 comments:

The Man is essentially an animal, his primary and greatest stake invested in his (or her) own survival. And when that survival is threatened, all the additional complex emotions as well as the ability to rationalise or apply logic become entirely expendable.
Case in point: One night, a desperate craving for Thai surfaced out of the blue. And with all things tinged with desperation, the advanced thinking, feeling human approach goes out the window when it came to the need to assuage that craving. Like a stiff drink. Or sex. No rest until you crack the code. Need it NOW.
I consulted the usual suspects in the blogosphere for guidance and found plenty of good things said about several Thai joints - a few were closed on Mondays and a few others were simply too far away in the horrendous rain-addled traffic. And then, just as I was on the brink of self-detonation in despair, I stumbled upon this lone post on Thai Sabye Sabye located on Old Klang Road, a stone's throw away from home for now.
The old unassuming outlet, located within Lucky Plaza (which houses Pasaraya Central, right before OUG turn-off) facing Old Klang Road, was a mere 5-minute drive away. I was giddy with excitement at the prospect of placating that incensed animal within. 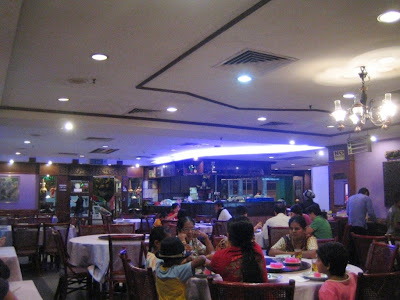 The place was nicely filled up with families who looked like they had returned again and again to order the same items on the menu every single time. The worn-out furniture was reassuring, as was the wearied, yet comforted disposition of the other patrons. 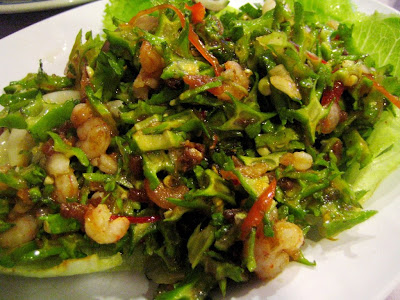 We started with the Four-angle Bean Salad. Scrumptious with both dried and fresh shrimps providing a nice contrasted punch, coated with generous dousing of nam pla and citrus. Very refreshing stuff. 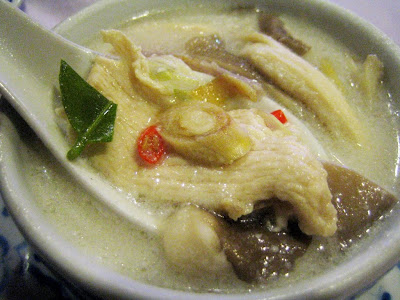 We couldn't possibly do without tomyam, especially on this chilly wet KL evening. Sabye Sabye served their tomyam soups in single serves (RM6 per serve) which allowed us to try two different types. He had the Tom Yam Chicken with Coconut Milk. It was creamy and comforting but it wasn't entirely mind-blowing. 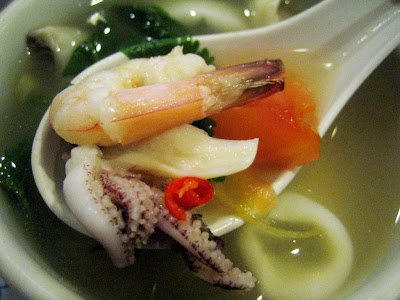 I went with the Clear Soup Tomyam with Seafood. Again, despite my enthusiasm for this place, I felt the tomyam fell a wee bit short on the crazy spicy & sour front. The abundance of sliced bird's eye chillies brought on a coughing fit at one point but I saw that as just bad swallowing action on my part, not entirely great tomyam preparation on theirs. 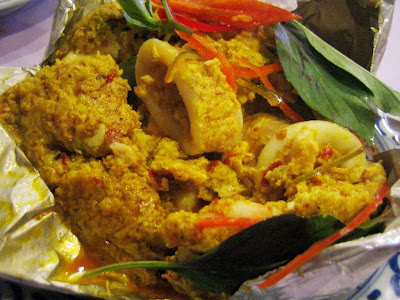 Otak-Otak was a radiant serving of seafood coated in egg, coconut milk and turmeric. Went down too easily with white rice. 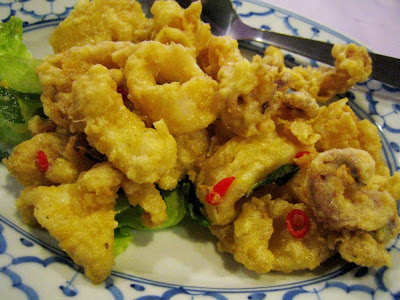 Deep fried Squid with Salted Egg dispensed the kind of joy one couldn't shy from when met with one's kindred soul. You want to get right under the skin and discover what you can't possibly know from muted appearances. 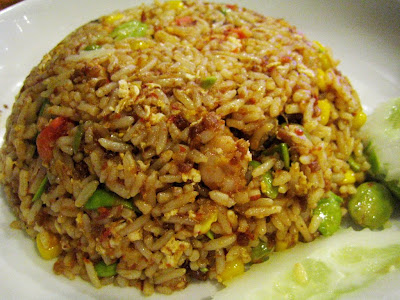 The soul of the evening had to be the Petai Fried Rice which arrived looking as placid as frozen peas but once we stuck our fork in to release the aroma, we were done for. I dare say I've not had petai marriage with carbs as zesty as this! 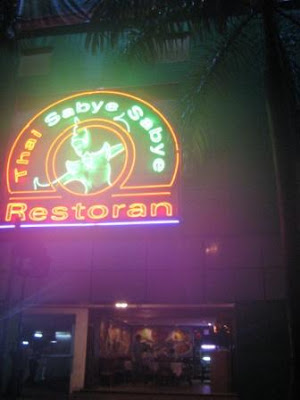 If you want to pay for only things you order, refuse the towel, the appetizer and jelly they serve as soon as you're seated, as they'll all pop up on the bill later. It's a token amount extra but still... you know what I mean. Meal rounded up to RM70 for two of us, which we were only too happy to fork over. The human in me laid comatose while the animal licked its paws and exhaled with gusto.
Thai Sabye Sabye
G62, Ground Floor, Lucky Plaza
Old Klang Road, KL
Tel: 03-7981 2887
Posted by minchow at 10:45 PM 21 comments:

The Journey to Being Better, Country Farm Organics, Bangsar Village I

The year-end season is surely one of contradiction. On one hand, we have the assault of parties and gatherings all imploring indulgent and gregarious misbehaviour. On the other hand, it's also time to ponder the past twelve months, probe the failings of the year and warily resolve that, next year "I'll simply have to be better!"

Having recently recovered from a bout of poor health, I was forced to examine how I've chosen to take care of (or rather, heedlessly abuse) my body. Thankfully, I have Hui, who had successfully embarked on a journey to revamp the tired lifestyle that I still live today, offering me inspiration and purpose beyond the party season.

So one evening, with Mei Shean in town, we decided to try something radical - instead of the usual protocol of hitting up a bar for one too many drinks we'd most certainly regret the morning after, we went organic. In alcohol-ridden Bangsar, no less! 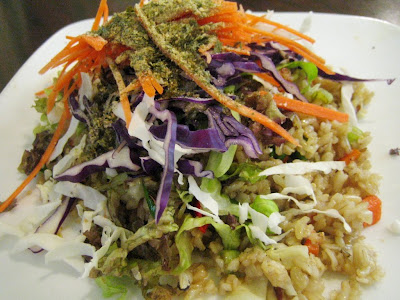 Hui ordered the Country Farm Organics' Volcanic Fried Rice. It had promised spice in the menu and it delivered, in the form of tiny, deceiving chopped up chilli padi and pepper mixed into brown rice and plenty of vegetables. One spoonful sent me screaming for my carrot juice! 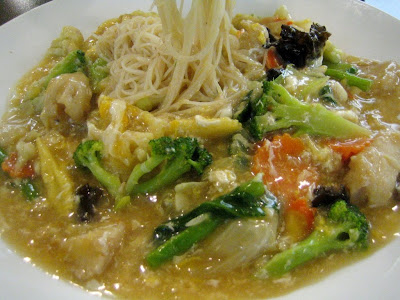 Mei Shean went for the Guang Dong Noodles, which arrived a healthy incarnation of Wat Tan Hor - brown vermicelli doused in eggy sauce filled with fresh vegetables. She was pleased with the thick golden eggy sauce and the generous portion. 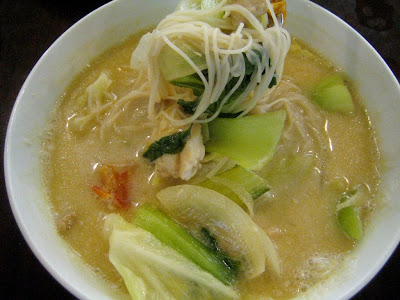 I went with the Dory Fish noodles, which arrived a huge bowl of brown rice vermicelli soaked in soup flavoured with sour preserved vegetables, neutralised with soy milk. So non-organic versions would blow this out of the water but for all its intent, this was flavourful enough and proved that not healthy eating does not equal bland eating! 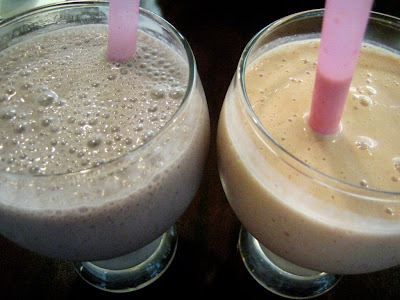 They also proudly feature a bevvy of soy shakes, two of which featuring berries as key ingredients. 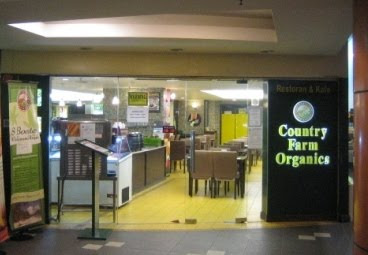 Country Farm Organics sits bright and proud right across from the hazardous call of the Daily Grind at Bangsar Village I. Meal for the three of us came up to about RM70, a steal in this neighbourhood. They also have a well-stocked organic food store adjoining the dining area.
I wouldn't mind revisiting again, and look forward to eating and living better. Let's hope that I find the moxie to strike moderation for the rest of this month!
Posted by minchow at 11:20 AM 21 comments: