So, it appears that organic food does not offer any significant benefits over ordinary food, as reported here. What remains in question is whether the true benefit of organic food is not what additional nutrients it has over ordinary food, but what it doesn't have, i.e. preservatives, chemicals and other such nasties.
It was oddly coincidental timing that we decided dinner would be at Yogi Tree, on the same day this story came out, and on the same day that dear Hui, who is presently traipsing in India, was released from the ashram, where she had undergone an ascetic, remote, yogi-fying spell, and been fed spartan meals of beans and bread. 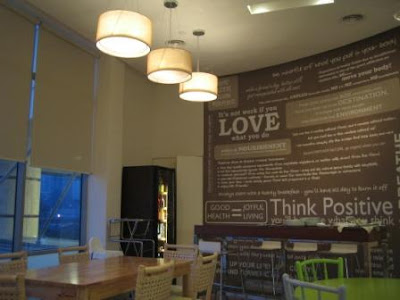 Yogi Tree's extensive menu plus the changing daily specials, couldn't be further from what the yogis eat. Some of the items sounded so indulgent they couldn't possibly be healthy! 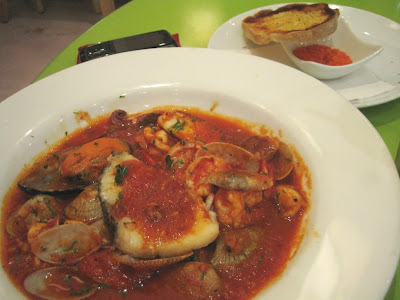 Janice had the Tagine of roast monkfish and seafood, a hearty tomato-based stew that came served with rouille (an olive-oil based sauce, we found out) and bread. I should have gone for this myself... 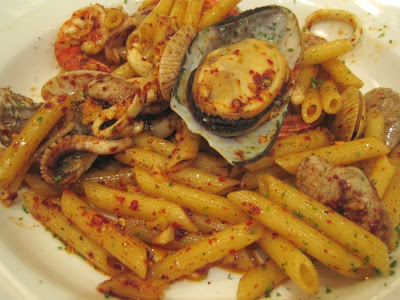 ...but I went with safe - Seafood Aglio Olio with garlic and chilli. Plenty of spice, and the seafood was fresh & plentiful, but the penne was severely undercooked. A lot of chewing and gnawing involved so I'd suggest going with the other types of pasta available if that's not your thing. 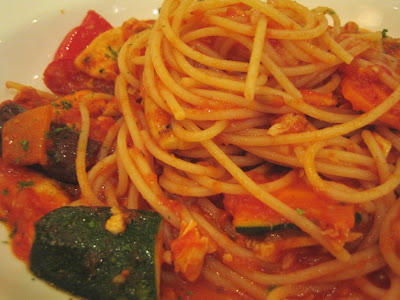 Both Shanice & Nico went with pasta in Tomato Basil with Grilled vegetables & chicken. 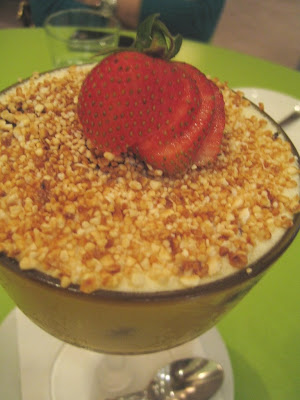 Tiramisu Trifle with black cherries in Kirsch. I didn't try this but the others felt it was too way too sweet. Hmmmm....sugar much, Yogis?

They also serve alcohol, and on their menu, expound on the lesser-known benefits of the various nectarous offerings, when consumed in moderation. Yes!!! I could get used to being healthy after all!
Posted by minchow at 9:00 AM

J, little bit alcohol is okay la but not much ma haha. Anyways where can I find Yogi?

lurve the tagine here. i try to deceive myself that eating here really is healthier. but in reality, even though it helps that the laksa here is "low santan," i just end up over-indulging anyway by always ordering multiple dishes :D

this place looks good to me! :)

we loved this place a lot. their weekend roast is superb!!!

From the pic, the foods look delicious. ^-^

If organic food tastes and looks this good, I wouldn't mind having this on a weekly basis.

My mum's been trying to force steamed greens, brown rice and poached unsalted organic chicken down my throat...HELP! 0_o

I luv the concept, but its bee nages since i last went! time for a re-visit?
but everytime i'm in MV I grativate towards KoHyang!
Awesome stuffs..

i've tried, in vain, to get my friends to eat here everytime i pass by :(. they said it sounded too healthy. should show them your post.

i tried their carbonara and thought it was good. not really particular about organic factor, i guess at the end of the day, moderation is the key to good health. so, for plate of hokkien we consume, let's have some cups of pu erh tea to disintergrate the complex fat chains. :)

Wasn't too impressed with their salads although their breakfast set was decent enough. Organic doesn't necessarily mean healthy, does it?

Sweet tiramisu is fine with me. Lots of pasta choices?

J, Agnes Cheong, the happiest revelation ever I must say! :-D Agnes, Yogi's on the Isetan end 1st floor of Gardens Mid Valley, you won't miss it!

Sean, I think they're advocates of living, not specifically eating healthy. I like!

BBO, it's a real good place to chill after work in the evenings. Service not too bad either!

Babe_KL, I keep hearing about these weekend specials. WHAT have I been missing!? This does mean I have to come back to work area on a weekend though.... well worth it??

Food Paradise, I think the tagine dish was the best... but I've yet to work through the rest of the menu!

Bangsar Babe, I believe you're deviously navigating around your mom's latest regime! I have complete faith in you!!

Nomad Gourmand, agree! Ko Hyang rocks! And service is so super quick on their feet and pleasant!

SC, I am not exactly sold on the Health proposition here, but I don't mind returning for tasty indulgent meals!

Nic, Pu Erh tea isn't just great for cleansing after lardy meals, it's great for alleviating a hangover too!

LL, I remain indifferent to the whole organic argument too...OK, my next hits here are breakfast & the weekend roasts!

Worldwindows, I think about 6-7 choices at most... decent usual suspects but not the highlights of the menu.