We visited yet another of Papa Chow's oldie-but-goodies, Sin Kheng Aun off Chulia Street a few nights ago. Papa refers to it as the "70-year old" restaurant although a quick search on the Internet reveals that Sin Kheng Aun was established in 1941, which makes it 67 years old. Close enough, I suppose.

We had the usual staples. I was still reeling from a (horrid) heavy lunch with Mei Shean so I was really dragging my feet here. Luckily Fat Tulip was in the house and he's very good at polishing up remnants. 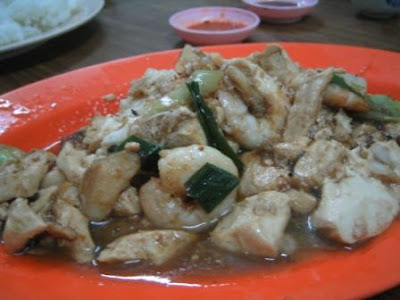 Stir fried tofu and leek. My position on leek remains, i.e. do not understand it, did not touch it. 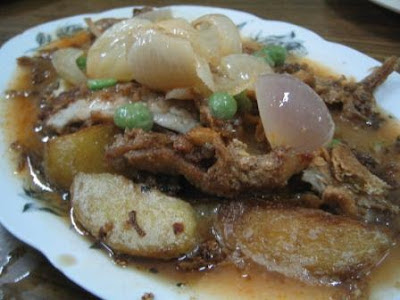 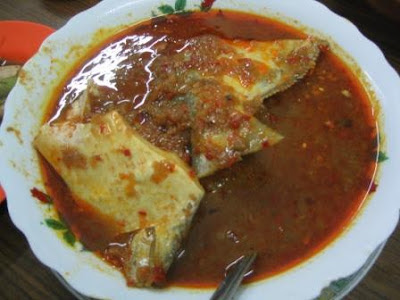 Curry pomfret. To be honest, we've been over-doing the curry fish of late. I am divided on this -I'm not a fan of the use of pomfret in curry but I can' fault the classic-ness of this dish. 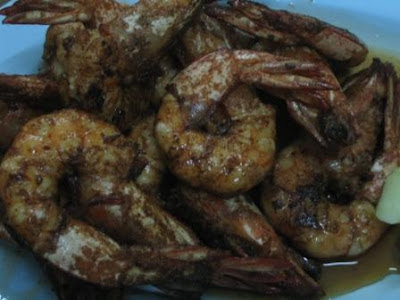 Assam Prawns. Lovely, juicy, flawless. Still, if I had to pick, I would go for Hot Wok's. Cabbage soup with fishballs and meatballs. Really nondescript. It tastes of nothing but boiled cabbages. Which is not a good thing in my books.

Nice enough meal, and yes we'll be back but in the mean time, a break from visiting the old, old haunts would be nice, eh?

boo hoo! I want the chicken chop! I insist on being taken to chicken chop! why do you guys go to these gems only when I'm not around? Karen Mok is not happy.

Have tasted all the dishes except the Hainanese chicken chop. Sure looks different from those serve in Western food outlets.

so I guess HOT WOK is the place to go for real good Nyonya food in Pg?

Hi J2Kfm, you dont eat leeks at all?...mmm, it goes well when it comes to stir fry with roast pork...ooo, its my favorite :).

Hot Wok not so good i would say, or you can try the Perut Rumah Kelawei Road - blog from CK Lam, or Mama's in abu siti lane.

i've been there once, but that was long time ago, cant recall much. i just wonder what is the price range there.

Got Hainanese Chicken chop wor...good, penang is hard to find.

Gill Gill, I don't like leeks at all! There are very few vegetables that I dislike but leek is definitely at the top of that list! But maybe if I have it with roast pork like you described, I'd change my mind??

Hmmm... how come I didn't know they served Hainanese Chicken Chop? I have tried once in an unnamed old coffee shop here years ago and like it quite a lot.

I quite like the food here initially but still can't get over the price fright I had when I brought my Aussie friend over there for lunch. Three of us had RM200++ of food there after he had repeatedly ordered their Assam Prawns and Curry Pomfret.. sweat~~ and that was 7 years ago!

This is one of my favourite eating place. I cannot get sick of it. The tu thor theng, chicken chop and egg fu yong are good. You should also try the liver with thick soya sauce. The fish curry is nice but pricy. I think is RM 5 per piece.