We'd been a fan of Lynn's for some time now, regularly returning for one of the lovely set lunches and daily specials. That is why it pains me (but only a wee bit) to have to post about this particular visit today, surely one of the least pleasant experiences we've had there. 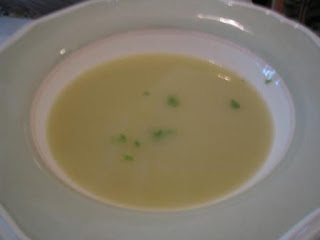 Wednesdays are Roast Pork days and I duly ordered one as main course for the set lunch. We started with Cream of Leek soup. Now, leek is probably my least favourite vegetable in the whole world. I managed to stomach this incarnation though, so they must have done something impossibly right with the vegetable. 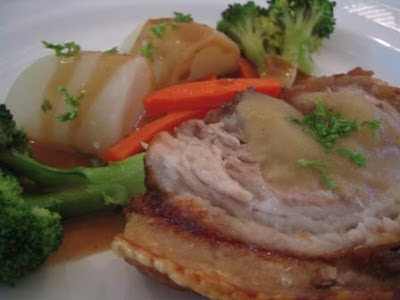 Next came the mother of all main courses, the lip-smacking, fat-oozing slab of pork, done to tender perfection, its skin roasted to a thick, crunchy golden brown crust, served with sides of vegetables and potatoes. Unlike everything else that followed, this did not disappoint. 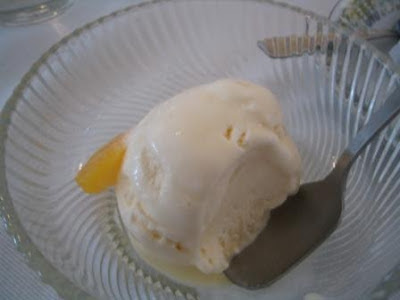 Dessert was vanilla ice cream, one scoop. Now, normally, having just been fed that gorgeous piece of meat laced with all that fat, I would not even dare suggest that this did not live up to the rest of the meal or our reasonable expectations. However, we had spied earlier another lady, obviously a regular, finishing off her set lunch with a generous slice of cheesecake. I had assumed that knowledge by informing the lady who waited on us that I would do without the cheesecake but my two dining companions would be fine with it. She returned, after having conferred with her boss (who obviously did not hold us in the same regard of the other regular, despite our almost-weekly visit) brandishing three humble scoops of ice cream and announced apologetically that for us, "Dessert is ice cream." Perhaps, we should have argued. Bulldozed our way through, kicked and screamed so we'd get that damn cheesecake we deserved. But I honestly believe they should've had better sense to recognize returning regulars and not impose clearly visible double standards, regardless of whether they are tai-tais or not.

To add salt to the injury, the oft-inspiring cup of coffee at the end of each meal became an inspid, diluted affair. I have no idea if this is another inevitable casualty of all those rising food prices but there is nothing sadder than crossing a favourite eating haunt off the list. The picture here depicts the ever-lovely tableware that still lifts the spirits, not the pishwater that came inside. A reminder of the Lynn's that we once knew and loved.
Posted by minchow at 4:18 PM

since you love roast pork, I like to recommend you the roast pork belly that I had at Edeweiss... http://tmytmz.blogspot.com/2008/04/swiss-restaurant-edelweiss-cafe-at.html

Ooh thanks! The pork belly looks promising, but I'm equally intrigued by the spare ribs. They look dangerous!