A couple of posts ago, I wrote about longing for pies minus the puff pastry. So imagine my utter delight when I chanced upon exactly some of those today.
Disgruntled and soured after the lunch at Lynn's, I decided to hang out with Mei Shean while she waited for an appointment on Macalister Road. We had about 20 minutes to kill and thought we could really use a seat and some coffee and voila, about ten feet away from us stood the highly inconspicuous KSB Specialist Bakery & Cafe. We wandered in and ordered ourselves two cups of freshly brewed coffee at RM3.60 each. They came in steaming mugs, so strong and virile they more or less made up for the disgrace that was Lynn's coffee earlier.
We deduced that it's the same bakery that started at the lobby of Loh Guan Lye Specialist Centre and it's branched out to a stand-alone outlet now. Apart from the usual array of preservative-free health bread and buns, they also sold toasted sandwiches, mushroom soup and gasp! a variety of pies with short crust pastry! The selections include chicken, curry chicken, black pepper, sheperd and vegetarian. They also accept bulk pre-orders for a rather impressive-looking Yorkshire pie. We both took away two pies each - I took home chicken and sheperd (which we learned was also chicken).
And the verdict, come dinnertime?
Apart from the crust, a noteworthy and welcomed change from the puff pastry madness which has enveloped our deluded nation of pie makers, I have to say the filling was.... more of the same. At RM3 each, they were still very tasty treats but I was kinda expecting the filling to be some gooey, gravy explosion and they turned out to be the rather standard potato-chicken-egg variety. 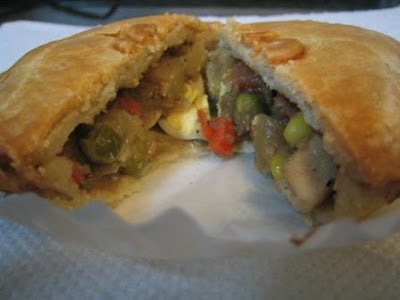 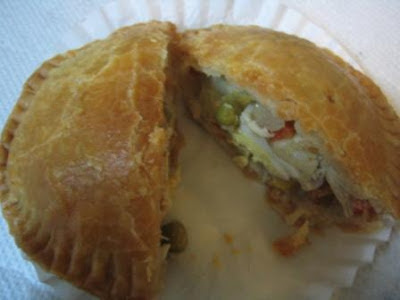 Chicken Pie - essentially the same thing as Sheperd's Pie, but of lighter colouring? 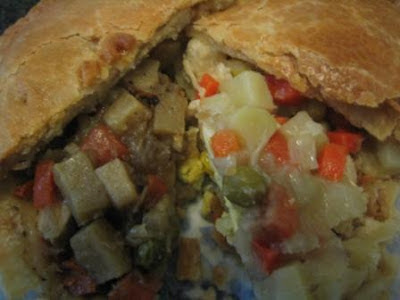 A closer look at the filling contrast - Sheperd's on the left, Chicken on the right. They really did taste the same, not that there's anything wrong with that.
Posted by minchow at 8:53 PM