The Pride of Sarawak... is Fried Chicken! Or at least at Rajah Brooke Cafe, Kuchai Lama

Despite the proximity of Kuchai Lama to my neighbourhood, I had not ventured to seek out the thriving neighbourhood of a great many food digs until one fine afternoon, when steadfast eating buddy Fat Tulip suggested driving to check out Rajah Brooke Cafe. 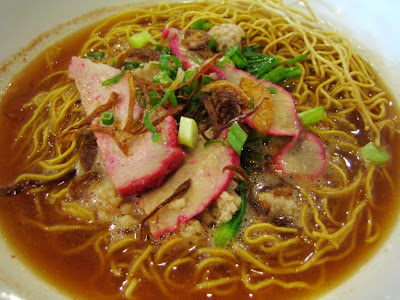 He decided on Tomato Mee which came looking like a redder version of Jawa Mee with crunchy noodles. Tasted a-OK, nothing phenomenal. Except maybe the scary fuchsia tint on the char siew. 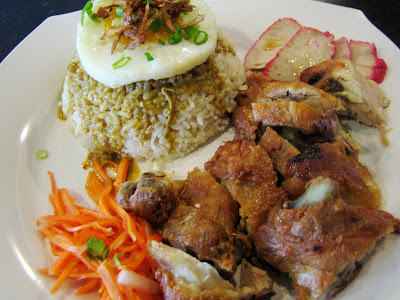 I went for the Nasi Padungan and asked for the steamed chicken drumstick to be substituted with the fried Santubung chicken, smartest thing to do ever. The chicken arrived as everything fried chicken should aspire to be - crisp, moist and quite simply, very tasty. Those who do not want to order the rice dish can also get this separately as a side dish.

My aversion to the combination of butter and rice kinda killed my enjoyment of this dish though. About halfway through blissfully chomping the fluffy, fragrant rice without giving thought to the butter factor, Fat Tulip pointed out that the rice served was in fact, not white but butter rice. I pretty much dropped my cutlery right then and there. 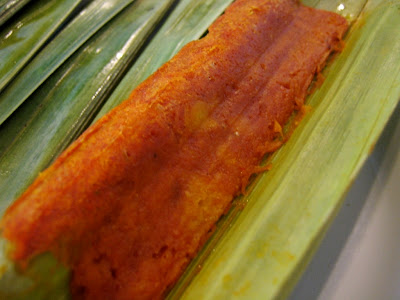 The otak-otak was a sore disappointment though. Rubbery and featherweight, the serving of six slices offered nothing to the meal. 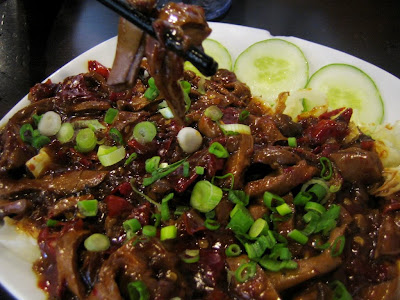 After downing his noodles, Fat Tulip decided to go for the kill and order the Kung Pao Pig Stomach and rice. He enjoyed it enough but I found the sweetness of the dish off tangent. 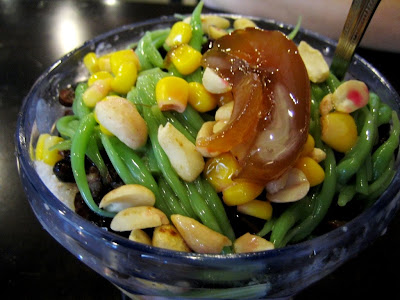 Rajah Brooke Special - like cendol, but not really. Bleh. Say no to condensed milk! 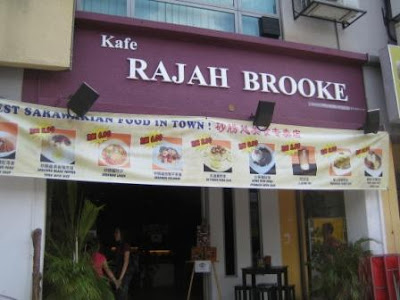 Meal was a very manageable RM40. Service was efficient and we got our orders after a relatively short wait time. Can't size up the claim of Best Sarawakian food in town though, as it's an under-explored brand of cuisine for me. I'd come back to give the Sarawak Laksa and Kolo mee a go, and another side order of that Santubung Fried Chicken.
Definitely keen to explore more of the area. Even spied a newish Pan Heong outlet. Anyone has a clue whether this is offspring of the eminent Pan Heong in Batu Caves?
Kuchai Entrepreneurs Park
19 Jalan Kuchai Maju 8
Off Jalan Kuchai Lama
03-7983 3264
Posted by minchow at 12:30 PM

ignorance really is bliss! but what's wrong with buttered rice?
i've read about this place a few times and been meaning to try it, but i'm not even sure how to get to kuchai entrepreneurs park. time to look it up on google maps!

Oh don't!! The sarawak kolo mee and laksa is nothing like the original and it is mediocre at most! Please don't waste your time and money!

Let me take u to the authentic kolo mee. its in Puchong.
S'wak laksa..well..Unka open house u come ok? My s'wak friend will cook it for us!

Nasi Padungan and asked for the steamed chicken drumstick to be substituted with the fried Santubung chicken?! .. very smart indeed! (never tried but the names alone can make me slivate!)

this restaurant is up on tv show before but i read of some negative review about this... erm... mayb i should try the real authentic one at puchong instead?!

some raved, some spewed poisons.
aiks .... though tempted to try the tomato mee n teh c special (ok, can get this anywhere, but still ...)
after seeing them being featured on TV.

Sean, would hv given up once I hit the Entrepreneurs park if not for the persistence of my companion! A bit of a maze, eh? Nothing wrong with butter or rice per se but I just don't like how it sounds! Perhaps if they gave it a different moniker...

Ciki, that Santubung chicken is no small feat! Maybe it's been too long since I've had fried chicken but this was soooo good!

Ai Wei, wow this Puchong reference keeps coming up!! I really need to crawl out of my shell and head out there!

J2Kfm, no big raves from me, with the exception of the fried chicken at best. I'm just kicking myself over how long it took me to do that 5 minute drive down the road to Kuchai!!

What? No cured, decapitated heads from the headhunted? :p

Never been to Sarawak, so, I would not know how it tastes like even if it hits me in the face. The place looks pretty decent though, but the thought of leaving central KL for just so, so food is a bit daunting for a lazy bum like me.

ooo puchong got authentic sarawak kolo mee? i miss since my trip to kuching :)

Paranoid Android, yeah neither do I... real authentic Sarawakian cuisine is a vague, hazy concept to me. But have it on good authority now that this is definitely NOT it!

Joe, ooh you in the neighbourhood too?? You must know this place inside out... so do you know if that is the real Pan Heong or not?

rokh, yes Puchong seems to be the centre of real Sarawak here in Klang Valley. We must go!

Me, I'm embarrassed to admit this but I got lost the last time I tried venturing into Kuchai Lama... Maybe Sean is right and Google Maps is the way to go! :P

it's kinda difficult to find authentic Sarawak delicacies in KL lately. But i heard that a stall in Puchong sells really good Sarawak kolo mee. and Aunt Christina's laksa in Bangsar was a memorable one too :)

Once tasted the REAL stuff in Sarawak, we can hardly find back their original taste. haha. I was tempted to drop by this place at first ;P

LFB, Google Maps FTW! Actually now that I'm trying to recall, I can't exactly remember precise directions how to get back there! Gasp!!

SC, I was planning to go back for it but I'm pretty convinced now after protests here that I need to be heading to Puchong (and Sarawak!) for the real thing! :-P

Christine Leng, yes that Lucky Garden Sarawak Laksa is pretty fab stuff, even if I haven't had the original stuff to compare. This Puchong kolo mee drill is driving me up the walls!! I HAVE to go soon!

hahaha minchow! we are back with our head in place now lol!

come come we go and eat at one of the best laksa sarawak in town located at Kepong! :)

hahaha I thought some people only eat bread! lol!

i remember passing by this restaurant and LOL-ed at the name. i don't think Raja Brooke has eaten any of the dishes..haha! ok, time to check out the kung pao stomach. how interesting is that!

i know its whereabout but not yet been there yet.

Go to Sibu for some good ole Sarawakian noodles. Sounds ambivalent on your part. The 'char siew' colour is striking:-(