Food on film and television is pretty hard to beat. Let's face it, what other prop is easily accessible to the audience, regardless of language and demographics and theme? Similarly, the entertainment value of people behind food as an art is great fodder for televsion content, and for couch potatoes who love food like me, a near-perfect lazy afternoon.

Pic lifted liberally from Asian Food Channel because I'm a gangster like that
Michelin-starred Chef Daniel Boulud and his adventure in Singapore is the subject of the Asian Food Channel (AFC)'s second original production. AFC invited Daniel to whip up his signature cuisine for one night only at the Fullerton Hotel and the hour-long feature captures the intense rigeur leading up to the evening of this meal.

The premier was held at the spanking Neo, perched atop Jalan Sultan Ismail next to Tamarind Hill which became dramatically more ravishing as night fell upon us. It set the stage for the documentary itself, a rapid fire dramatized study of the man himself during his trip, punctuated with plenty of tension, humour and frenzy.

We got to chat a little to our affable host Hian Goh, Managing Director of AFC to try see if there was dirt behind the decorous depiction of Chef Daniel, having heard of horror stories of other celebrity chefs. But Hian assured us that Chef Daniel was a genuinely nice, gracious personality, incredibly passionate and meticulous. Besides, he shared, AFC only works with nice guys! 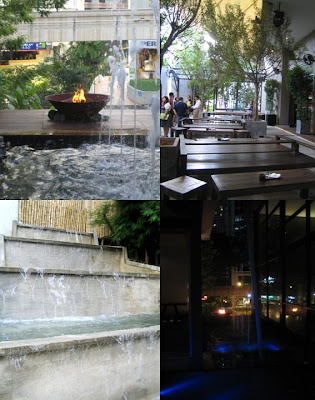 Neo's aqua theme offered a lovely ambience for the gathering which was also for me personally a wonderful first-time meeting with folks whose words I were familiar with. Also it was great to meet again some bloggers from Penang I'd first met almost two years ago. 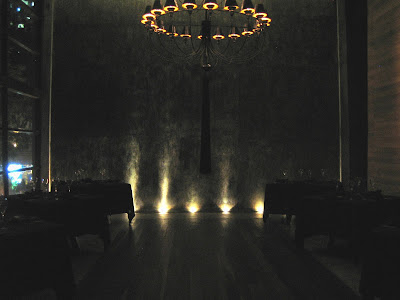 The parting shot of the magnificent dining room with its water wall backdrop left me awed. Just look at it... enough drama and trepidation to behold the appearance of Count Dracula. Or failing that, Chef Daniel Boulud himself!

'Daniel Bould: One Night in Singapore' will premier on AFC (Astro Channel 703) on Tuesday 29th September 2009 at 9PM. Caution: Do not watch hungry!
Big thanks to Asian Food Channel as well as Alice George Communication for hosting such a great evening! We look forward to seeing more homegrown productions in the future!
Posted by minchow at 4:00 PM

It was great meeting up with you again. Hope able to do so when you are back for holidays in Penang.

Ha ha... I knew you would be dazzled by the waterfall thingy in the main dining area. Where are the shots of your hotties (Boulud entourage)? Howz the food there?

How nice if I can make the time to attend the event. :(

eh but like all other artistic geniuses, great chefs are entitled to be temperamental divas! =)
i assume/hope they served u guys some samples of neo's food ... they've are some killer tapas there...

Heya... It was great finally meeting up with you at this event! Fantastic write-up too, and I like how you are a gangster with them promo pics, hehe.

Hope to catch ya around again, soon! :)

Wow... he interior are nice. But too bad I am down with gastric and fever. SO did not attend. If not I will be able to meet you too! ^-^

CK Lam, yes so good to meet up again! Will def see you again in Penang!

Paranoid Android, it was jaw dropping! I had actually seen it before it turned dark and was like, meh... but it's something else altogether at night. I wanted to be Mina!

Little Inbox, next time then?

Sean, I know... it almost MAKES for better entertainment when they misbehave right?? As for the tapas... err I wanted to refrain from commenting but TNG beat me to it... and I echo her sentiments! Still the dining room was so awesome I'd be willing to go back and give their regular menu a go!

TNG, great to see you too! Really ah, you looked and sounded nothing like the pneumonia-ridden entity you were supposed to be! I can only imagine what you're like when you're 100% healthy! :-)

LFB, yes really good to meet you in real life! Pretty sure we'll be running into each other down the road! :-)

Food Paradise, ooh hope you're feeling better!! And yes, hope to meet you properly next time!

Kampungboycitygal, yes great to have met you!! Remember, Sid's is just down the road from me! :-P

it was nice meeting you up in such a lovely event!! :)

Gosh, missed you guys out! I was slated to attend but FFK last min cos my son was sick :(

haha Count Dracula, what a fitting idea ;) nice meeting ya!