The Meat of Merrymaking, Bavarian Bierhaus, The Curve

CAUTION: Some baaad photos ahead! The lighting was particularly bad and I had to contend with a bunch of hungry and impatient folks.

The bride-to-be had picked the Curve for some pre-wedding fun and frolics. 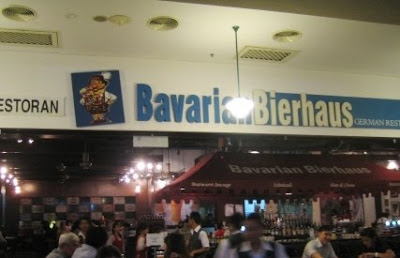 Bavarian Bierhaus was packing the crowds in so good thing to make reservations ahead on a Friday evening, particularly if you're coming with a large group. 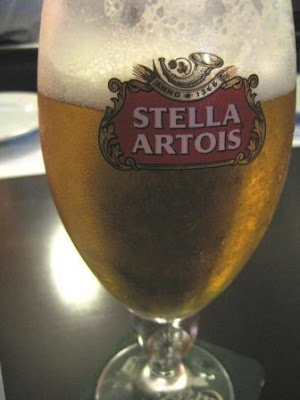 Bavarian Bierhaus' beverage menu featured the usual bevvy of Belgian beers. I had been wrongly informed beforehand (or I'd imagined this myself) that they served the rather rare Apple lambic here and I'd gotten the rest of the troop rather excited. Having been told that no, Apple lambic was in fact, NOT available, I ate humble pie while the whole table threw me accusing stares. I settled for Stella, which did not get anywhere near the lambic promise. 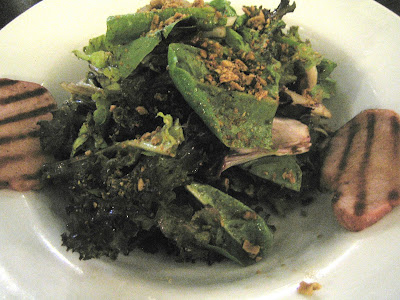 Some orders the Bierhaus Salad to balance out the inevitable meaty blowout. This was very well-received, the lightness of the balsamic dressing working harmoniously with the crisp greens and the seared seasoned pork loin. 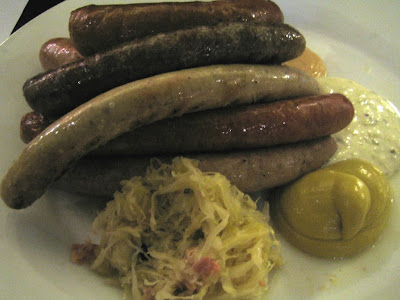 The Sausage Platter arrived an impressive composition of eight sausages with sauerkrat and potato salad. A killer of a meal for one person, but works out nicely when shared between two hungry sausage fiends. When asked to pick which one was best, the black (lamb) came out the favourite. 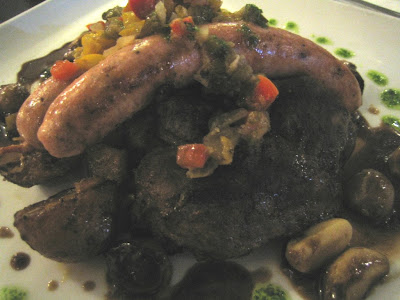 Another goes for the Sausage & Lamb platter and did a superb job wiping her plate clean, enjoying it thoroughly in the process. 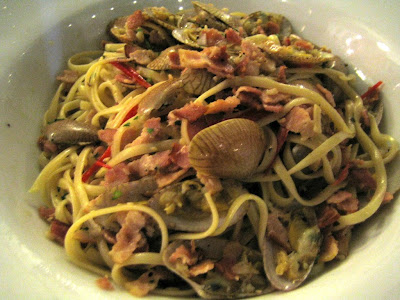 The pasta princess ordered Vongole, al dente linguine with fresh clams and generous shavings of streaky bacon. I am liking this pervasive use of pork in everything... almost like every dish is an excuse for a porcine experiment. 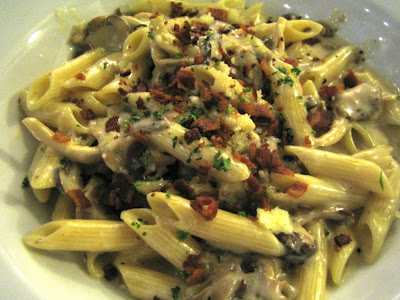 There were a couple of dishes here and there that didn't have pork. The Tuna Penne also scored high points with the meal owner. She had ordered this following a more-ish soup starter, not expecting this to be anything more than an unremarkable filler but was surprised by how simple, yet delightful it was. 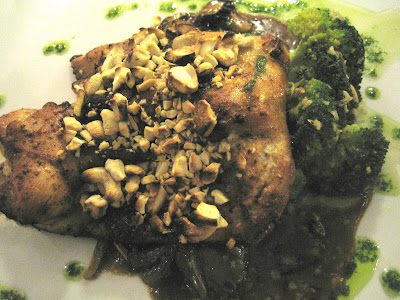 I decided to do chicken, because I liked the sound of the Pistachio Crusted Chicken. It came two generous slices of chicken breast with a coating of roughly chopped pistachio nuts on a pool of mushroom stew. I could've done with thigh meat instead of breast, and the stew could've gone a little easier on the sodium content but overall, I was pretty happy with it. 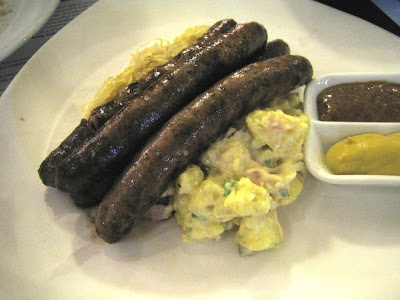 Latecomers including the bride-to-be ordered the Lamb Sausage and another salad to share. All good, they said. 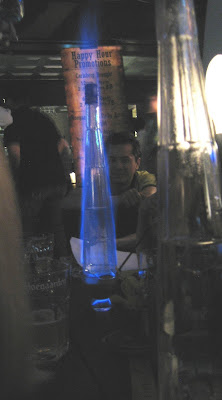 We carried on to Library for more misbehaviour. While the location had potential, we were unfortunately subjected to an evening of DREADFUL service. Orders took about 40 mins to arrive, and we were treated to profuse eye-rolling by waitresses with too much attitude. Equally wretched was the showcase by the live band, murdering every song ever known to Top 40 pop-rock history.

I'm game for merrymaking as much as the next person, but come on, for those drink prices and all that hassle, the joint should at least involve either a) live performance that's a notch more inspiring than cover bands in hotel lounges or b) a decent DJ on the decks AND a dancefloor! And it goes without saying that they need to exterminate staff who don't understand service - i.e. no, you don't get to roll your eyes when you get told off for screwing up the customer's orders. OUT!
Posted by minchow at 4:00 PM

They used to have a caramel beer there, called Doppel Bock if im not mistaken..But sadly, about a week after I discovered it, it was discontinued. I strongly suggest you fight the good fight and petition bavarian bierhaus to bring it back!!! =P

i was at the curve and e curve last night. spotted the libraty and i tot it is a REAL LIBRARY. haha.

hope to try bavarian bierhaus one day. so, is the libraty cool and fun?

Ah, meat and more meat! Best part is they seemed to have done well by the carnivores amongst us too! :)

Alas for the Library though. I'm a big stickler for service like you so I guess I'm giving this place a BIG miss. Thanks for the warning!

yikes! sorry to hear about the library! i recall one of the waitresses being too flirtatious and touchy-feely, but luckily didn't have to suffer any eye-rolling...

Guess only the guys gets the service??

But the food looks awesome! so much pork! and huge servings too!

We always have the good , the bad and the ugly. Sometimes more of and that is really bad.
But you know what ? Most of the time , they have a bigger problem on their hands so we never let that bother us

The sausages opened my eyes...

Heard of it so many times, never got time to try it yet...

I had a pretty decent time at the Library although the food was awful. I did a review of the place and I thought the cocktails were fun, fun, fun!

We went early, way before the band started and when the place was rather empty. They also graciously allowed us to order some extra bread free of charge to go with our chicken liver pate.

However, I went back a couple of weeks later around 10.00 pm. The band was so overpoweringly loud that we left immediately and adjourned to Laundry instead.

Oh, the sausages look amazing. Will definitely visit the Bierhaus soon for some phallic looking cuisine!!

Indeed a big Sausage Platter...generous portion, I would say.

I love Bavarian Bierhaus, just for great pints, food there is adorable. I passed by Library on the way for a movie yesterday nite and noticed their menu . . .. looks a bit expensive to me. hmmm.....

ooooh, another good review on this place. i cant believe that after YEARS of reading about this meat (well, pork) haven, i havent given it a go. i blame the nearby redbox...

Oooo...my favourite meat used in most dishes. Must visit soon. Looks at Nic. Jom! We adjourn for K session after lunch ;)

Looks like its pork and beer in this German Bierhaus. Where is the German Roast Pork Knuckle?

Nahri, that's too big a job for one person. I suggest you join the petition committee!!

Ai Wei, well I have evidently nothing good to say about the Library so far, but others may have a different opinion! Have a go and let me know what you think!

LFB, it might have truly just been us being unlucky that night! But suffice to say, I won't be going back!

Sean, HAHAHA! I probably would've reacted worse to flirty touchy-feely than to eye-rolling. Come to think of it, the hetero male waiters were accommodating and friendly, when we got them to partake in standard hen's night antics!

TNG, or only Sean does because he has such commanding presence! ;-) Methinks you'll dig the porky wonders of Bavarian!

BSG, true true! Which is why we didn't bother with an actual complaint! Waitresses must have been PMS-ing all at once!

Rachel, yes, a great platter for sharing if you can take that much processed meat! Throw in a salad and you're set!

Selba, the sausages were quite inspiring, I must say! And there I was extolling the merit of the chicken dish, while enviously watching the others chowing down on them!

Christine, ahhh, so the operative being turning up early! I did like the myriad of suggestively named cocktails that you reviewed in your post though. Hmmm... should I risk another visit?

CK Lam, yup... VERY generous! And I have to say, the service was tip top too, even though it was packed!

BBO, we did the happy hour pints at the Library - along the lines of get one pint and get half free, or something like that. But the pints were watered down, so no kick one! :-(

Nic, eh? Blame Red Box because it makes you stay away from the vicinity coz of the noise, or coz you naturally detour to K it out, even when all you need is a porky feed? ;-P

UnkaLeong, ahhh did you just answer my last response to Nic? You are the culprit keeping him away from these fine sausages??

Worldwindows, oohhhh trust me, it's in the menu!! We were somewhat conservative with the food that night because we had a lot of drinking ahead of us, but otherwise, the knuckle would be a must-order!!

we tried this place 2 years aso and it was memorable. German pork sausages and knuckles with the beer. awesome :)

Hey dear, I read your comment on my blog and just wanted to drop by cos it's really not right how you were treated. Here's my reply:

"I’m really sorry to hear that. I’ve had great experiences with the Body Balance instructors I know, but I guess it’s normal for some to get overzealous with their well-intentioned advice.

No, you cannot stop eating — that is ridiculous. I think the key is eat healthier foods in moderation without skipping meals or sacrificing taste, else who could keep it up? Nobody but robots."

Christine Leng, looks like I need to go back soon for the knuckle!!

Thanks LFB! I think this particular instructor was just malicious, definitely an exception to the rule. And don't worry, I will never, ever be a robot! :-D