Everybody Must Get Stoned

The mind-alteration would have been a welcome element, meeting up with Jen after the latest installment of her jaunt in the Promised Land, where organic substances, known for their medicinal properties are widely and legally available.

However, this being morally pasteurized KL, on a working weekday, we made do with a different version of stone. 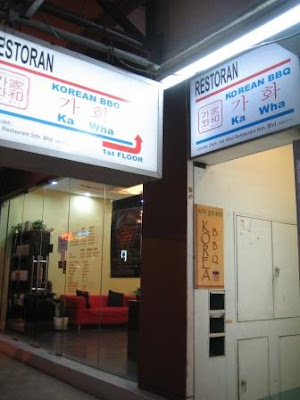 No shortage of first-floor hidden gems in Bangsar, and we'd probably passed by Ka-Wha a trillion times but we'd only given it much delayed consideration now. 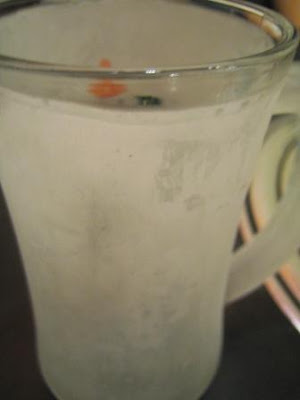 Frosty the Mug - beer would have to do! While we perused the menu (consisting mostly of BBQ dishes) we sampled the latest line-up of K-pop boy & girl bands, getting jiggy with it on KBS shown on TV. K-pop is taking over the world! 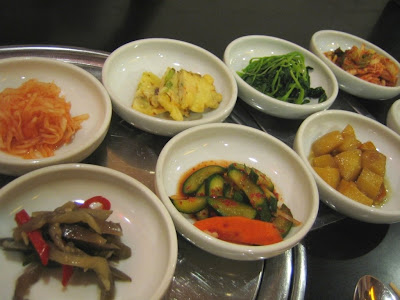 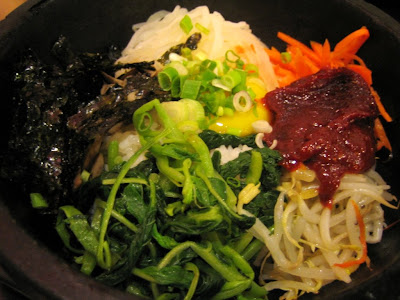 All of us did bibimbap. Mel had hers vegetarian, in hot stone bowl (RM18). 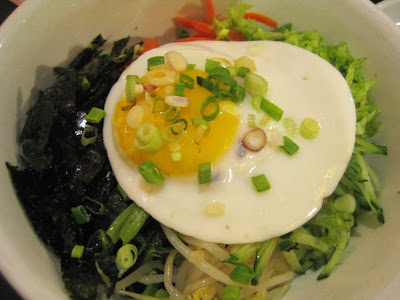 For some reason, I chose to go for the non-stone version (RM18), and suffered for my lack of forethought when the rice got cold halfway through the meal. It was still a very mean bowl of bibimbap. I always feel good about this despite the carbs, because of the amount of vegetables that I've consumed. 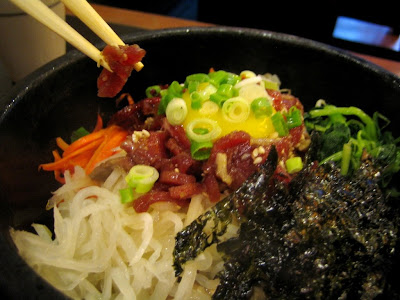 Jen ordered the hot stone with raw beef (RM25), and because she took FOREVER to eat it, the beef was plenty cooked by the time she declared she was done with it. 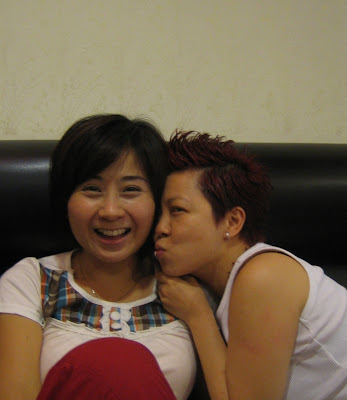 Mel & Jen, not quite stoned, but happy enough.

The only thing remotely hallucinogenic that evening was Jen's impending Dutch exam (which, I am pleased to report, she passed with flying colours!). But Ka Wha's stoned offerings were no less stimulating and befitting the occasion of a warm reunion with old friends.
Ka Wha is located on Telawi 2, entrace is right next door to Mak Koh. They have a RM48++ all-you-can-eat BBQ dinner deal, to which a lot of Korean families were seen tucking in on that evening we were there.
Posted by minchow at 1:40 PM

Oh..tht one besides Mak Koh???
Jeez, like u passed it godzillion times but never went up!

i've only recently discovered the pleasures of bibimbap (u're rite, carbs can taste healthy!), but the buffet deal here seems more tempting. i've walked past this place many times, but always kept on walking ... like a rolling stone... :D

You need to show us where the kickass bulqoqi be at! =P

What manner of beer is that by the way?

That must be some soft stones from Holland , with such shy delicate grins.

Korean fare can be very inspiring and addictive. Beef is expensive though.

this place looks good to me, shall settle in soon with them! lol!

oh my, am craving for korean food now. miss the korean pancake a lot >___<

I want bibimbap! My... I'm craving for korean food!

The pic of you and Jen looks so cute :)

I tried their buffet and found it so so only. But the kim chi pancake was yummy!

Nomad Gourmand, yup yup, entrance right next to Mak Koh! Well worth a fiddle if you're feeling like Korean in the area!

Sean, and so it applies to all these other places for me... I drive by, I make mental note that I MUST TRY it, I forget, I move on.... ahhh such is the failing of short term memory!

Nahri, it was actually Tiger, plain n straight! They have Hite too and that would be a better choice actually.

BSG, haha! Delicate they are not in real life, believe you me!

WW, yea some days I'm plain grateful that I stopped eating beef since I was 5!!

BBO, I'm actually keen to try the other hidden first floor outlets around Bangsar that I hadn't paid attention to before!

Selba, that's not quite me, but the other part of the trio, my friend Mel. They were quite quite happy that night! :-D

Bangsar Babe, ooh is that right? We were quite impressed with the no. of diners going for that.. must be the pricing point then...