The Dearth of Great Tomyam be the Death of Me!

There is no disputing this fact - KL has slim pickings when it comes to GREAT Tomyam, the perplexing yet phenomenal Thai contribution to palate busters of the world.

While there are concrete suggestions of potential in and around the blogs, as well as conversations with fellow hounds, great tomyam is in fact, an extremely personal assessment. The multitude of notes in traditional tomyam invokes the most liberal practice of cross-cultural appropriation and reception. What one person considers great tomyam may very well fall flat with another.

The search for my personal version of great tomyam led me to battle Bukit Bintang Saturday night traffic, on the trail of a recommendation from Jen. Jen has been frequenting Somtam on Changkat Bukit Bintang since the early 00's, before the area was colonized by higher-end lifestyle establishments. This too, explained why Somtam's prices of yesteryears were a fraction of what they are today, although it remains pretty much the no-frills eating establishment run by the same Thai family. 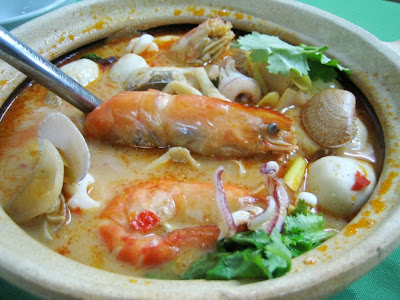 OK let's get to it. The red Tom Yam Talay (Mixed Seafood Tomyam) arrives, filled with an assortment of fresh, radiant-looking seafood. But... fishballs? Really, fishballs?

Jen informs that she's always gone for the clear tomyam instead, as it's unmasked by the coconut milk they use in the red version, so it's more sour and offers twice the punch. I won't say this is the ultimate but it is pretty decent tomyam, save for the fishballs, and also the fact that it could've been several notches hotter. 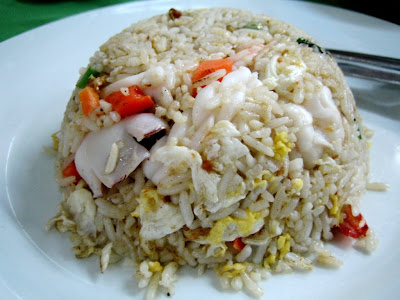 Khao Pad Talay (Seafood Fried Rice) is Jen's #1 recommendation. It came looking rather run-of-the-mill but after a quick fiddle with the sourish chilli sauce and nam pla (fish sauce) that Jen requested for, we had a taste and it was really delighful, nothing at all like its appearance. The secret, Jen proclaims, is in the way how the seafood is added to the rice only at the very end so the squid and prawns are almost still a little raw, and extremely soft and tender. 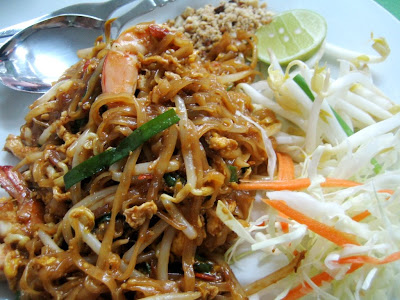 I'd only really wanted the tomyam and tomyam alone this evening but I couldn't resist reminiscing on those lazy fall-back meals in Bangkok, the very exquisite Pad Thai. Som Tum's version did not disappoint, bringing me straight back to hot muggy days of roaming the streets in wrinkled fishermen pants and a big bottle of Singha a permanent hand prop. 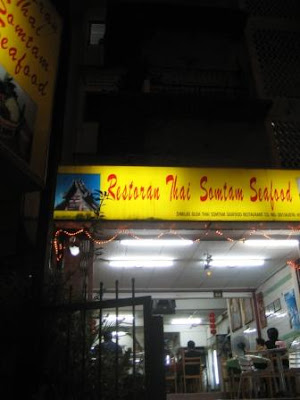 So it wasn't Great Tomyam this time around but it deserves a second visit - at least a go at the Clear tomyam and also some of the other very splendid looking items on its menu we didn't get around to this time.

Som Tum is located near the KFC end of Changkat Bkt Bintang, a stone's throw away from the start of Alor.
Posted by minchow at 8:30 AM

Interesting - will try it out some time. :)
(Really good tom yam is so hard to find though - tried a few of the tom yam places near the Kelana Jaya Giant Hypermarket/ post office area and they kinda sucked..)

Food there is pretty decent ;) Last time I was there, there was a gang fight and they ran through the restaurant *rofl* When they tried to do it the second time the Thai waiters just stood cooly by the gate. Would have been interesting to see the 'action' should the gang members had tried to enter the establishment again. I was ready with my fork! Hahahah

the tom yam here looks not too bad, I think the Tom Yam in Kepong and Puchong are is good to check out! :)

The tom yam indeed looks great but of course minus the fish ball though :P

i never stepped in ever since my colleagues told me how they got fleeced here :p they over charged them esp for the puny fish they served

the ultimate HOT tom yam, to me, is from ban nook at pandan indah. even after a few Thai beers, my stomach was still burning. the sour/spicy taste was good. masochism never felt better..hehe.

that is one place my husband will not want to go .. all the jam!!!

my low tolerance for spiciness and little liking for sour flavours cause me to give tom yam a wide berth. but i hope your quest for this holy grail keeps yielding pleasures aplenty :D

aiyo,,me no Thai food expert..hmm..heard a lot abt Pandan Indah's BKK house tho.

The thai restaurant in Pelangi Beach Resort, Langkawi had the most galactic jaw busting tom yam ever...(Can't remember the restaurants name, hope its still there...) with spice levels that would have given Frank Herbert a heart attack...

I usually get my fix from thai corner in pj and vichudda in uptown. But i think there two cannot meet your expectation! Since you had the real deal already... :)

J, yes I think there was an article in a daily some time ago addressing just how scare good tomyam is in the Valley!

UnkaLeong, HAHAHA! A fork eh? That should scare them off!! Actually come to think about it, while we were there, there was a huge rowdy bunch making merry at the next table. No fight though, just very loud merrymaking...

BBO, ooh ooh! Can you tell me exactly where in Kepong and Puchong? I really am willing to explore all corners of the state for good tomyam!!

Allie, yes we were wondering if fish fillet would have cost that much more... well even so, we finished every last ball!

Little Inbox, you think so?? I still think the picture doesn't do justice to how good it REALLY tasted!

Babe KL, yikes!! Somehow I got the sense that the Thai family coolly lounging about have gotten really streetwise and crafty, after having set up shop here for so many years.

Nic, thanks for the heads up!! Off to Ban Nook in Pandan Indah next then!

Duckie, yeah, it's quite painful... and the area just isn't made for pedestrians despite the fact that you have to park a mile away and walk to your destination.

Sean, thanks!! Tomyam isn't just spicy and sour... there's a sprinkle of magic in it, I swear! :-D

Nomad Gourmand, yes I can't believe I didn't recall until Nic mentioned it. Pretty sure I'd seen it on them established food blogs some time back. The hunt continues!

Nahri, what were you doing dining in Pelangi? Don't locals avoid these sort of resorts like a plague?

Love tomyam! Btw, I never had tomyam with fishball....

There are lots of ingredients in the Tom Yam Soup.

I prefer the clear soup tom yam with lots of limau purut and lemon grass.

This Segambut Yu Ai ( issit ah ?, also SS2 Chow Yang side) seems to be a rave place for tomyam noodles with astronomical pricing.

Interestingly many Malay roadside stalls are full of this hot orange stuff( as tho Malay cuisine ) but in multliple distorted serai onion chicken variations. We do believe even those so many tomyam soups we have tried in authentic thai establishments in KL did not unleash any whiff of internal or external firepower in us other than a shaking of heads, or are we yet again distracted by non-authentic Thai ladies in authentic thai mis-attires ?

Best KL tomyum I've had was from Gombak but I couldn't tell you where because my friend drove... Sorry!

Ah! Were we there on the same day? :D

You would be surprised to see fish balls in some tom yams further into central Thailand and up north. They are very far away from the sea and are unable to use fresh fish (which is expensive). Hence the fb's.

And also, do try their Kaeng Som Paek Sak, which is a sourer, more pungent soup with fish.