One fish head beehoon place that my parents used to frequent at an alarming rate was the one prepared by this legend of a man named Ah San. He used to operate out of one of the houses behind Convent Pulau Tikus, along Medan Maktab. Unfortunately, complaints from residential neighbours brought that era to a close. To this day, the whereabouts of Ah San remain a question mark. It was rumoured he had closed the business down to retire properly, only to reopen somewhere in town, Lorong Selamat, went the latest installment of said rumour.
So this fine morning, we went searching for it, but it was a fruitless hunt. Dejected, but still fixated, we headed to No. 7 at Parma Food Court, along Jalan Burmah. Mama Chow had tipped us off, saying that while it was no Ah San, it subscribed to Ah San's methods, i.e. the use of anchovies in the broth. 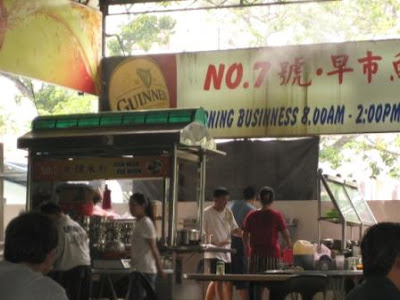 Alas, this brought my great Penang food streak to a screeching halt! 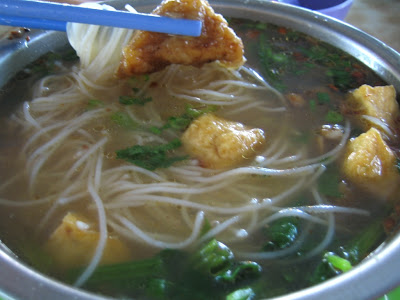 The picture says it all - one look and I couldn't even be bothered to attempt a better shot of it. The soup was bare, the ingredients were far and few in between - two pieces of fried fish head and four cubes of fried bean curd (Tau kua). Also, I didn't appreciate the gooey batter of the fried fish head pieces and the beehoon texture, which was a little too tough and dry. A poor student of Ah San's. 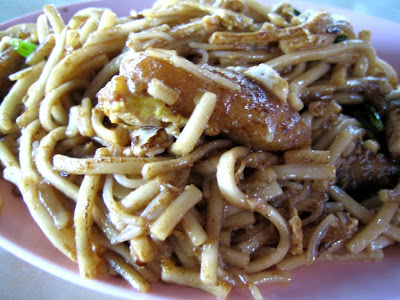 Breakfast was not a total loss, thankfully for No. 7's redemption came in the form its Fried Tau Chiam (soy noodle) with fish fillet, served with punchy sambal. This offered great relief from the lackadaisical fish head beehoon, plenty of bite from the noodles' unusual texture and the fresh fish pieces (gooey batter absent here) were utterly complementary and delightful!

I would definitely order the Tau Chiam again but to satisfy that nostalgic craving, the search for Ah San continues. If anyone out there has any clue where he has gone, please, please let me know, I will be eternally grateful!

Oh dear... that must be one of the most unappetizing Fish Head Noodles I ever saw! Really very bare!

Sorry, I also duno where the fellow goes to liao!

hohoh..so ur not the only one who had dissappointn fish head beehoon this week!

oh no!! i can totally relate to your experience. if anyone can tell me where my favourite hokkien mee stall has been relocated, i will be eternally grateful as well.

that's the thing about good tastes. u can never capture it on tape and they do fade with time. your reminiscences will only make u crave even more. sigh....i hope you'll find it, eventually! ;D

Faith, this is by far the most incredible story I hear from a foodie. Perhaps this can be turned into a movie or something. Here's the title ...

The Hunt for Ah San.

Make it a trilogy, it makes more money. Haha... sorry, did I let my imagination run wild ....

awww ... so sweet. seeking for that old fmailiar taste right?

though i cant relate with any similar stories, i do long for the original taste of some Ipoh's specialities, which quality has dropped drastically.

Pure Glutton, I know, losing my appetite for dinner just looking at the pic! Eeps! But then I gain it all back when I see the fried soy noodles! :-P

Allie, haha I have YOU to thank actually! The whole fish head noodle craze got rolling after I saw your post on that stall opp Red Rock Hotel, so thank you!!

Cariso, are you sure you're dipping deep enough into your good food radar?? Come on lah help me here!!

Nomad Gourmand, I guess have to be prepared for as many bad fish head beehoon as there good ones. Trial and error!

Nic, I shall hold on to that glimmer of hope. Ah San will be found!! :-P

Duckie, aiya, why didn't you warn me then??

Timothy, hahaha! Actually I was trying to pinch the title off that tragic Madonna movie, Desperatey Seeking Susan! But I think your trilogy sounds a lot more promising... like Star Wars or Beverly Hills Cop!

J2Kfm, but you trudge on nevertheless and find equally inspiring new tasty offerings in Ipoh right?? I shall endeavour to do the same!

Then you will need all da help you can get. Starting with BSG. But we will need to interview you at close range for at least 1 minute... to sense your genuine lost feelings aka a sadful of lost greatest love until life do we meet again..

Like Nomad, I just had awful fish head noodles with my mum at Chef Low (Bangsar) last night.

I think we can find many fish-head beehoon in either Ipoh and KL or is it? It is essentially the domain of 'tai chow' where they have the huge 'Butterfly' gas stove that emits the 'huuuuuuuh' sound when the fire was turned to the max. And coming from the old school I supposed it must be cooked in the wok. All the best:)

BSG, I shall do my best to convey loss on camera... the Ah San trilogy will nab an Oscar, no less!

Bangsar Babe, looks like it's a bad week for fish head noodles all around. We must not surrender!