Guzzle used to be Bella Roma, an Italian joint famed for its 1-for-1 promotions. Once they stopped those deals, the crowds trickled to a stop. Basically they were driven out of business by the unrelenting Malaysian rigid obsession with promotions, and never paying full prices, unless they are advertised as some kind of deal or another.

Guzzle now serves the usual myriad of decently priced Western munchies, pizzas, pastas etc. alongside a decent selection of cocktails and beers. And picking up where its predecessor left off, Guzzle's deals are better than ever! 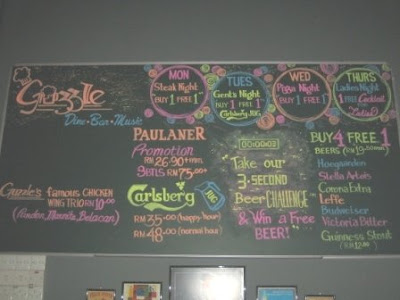 The 1-for-1s are back! We were there on Thursday night though so we got the complimentary cockails and the 4+1 imported bottled beers. 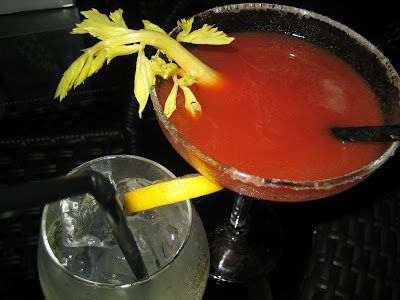 Lime Drop & Bloody Mary. Even though they're on the house, they make 'em strong. We like! 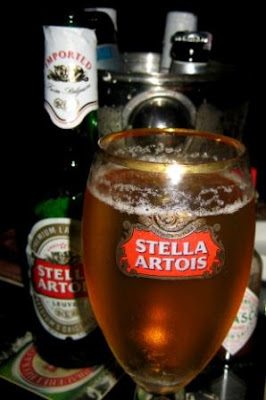 4+1 bucket - take your pick from a healthy list of imported beers. Our configuration for the evening: 3 x Stellas, 2 x Hoegaardens. 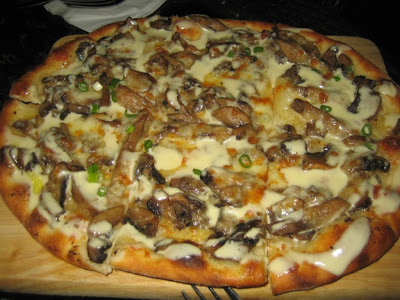 To eat, Hui has the Mushroom & Blue Cheese pizza. While the base was merely serviceable, the toppings were properly profuse and went very well with our beverages. 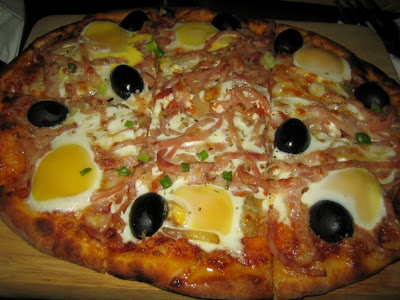 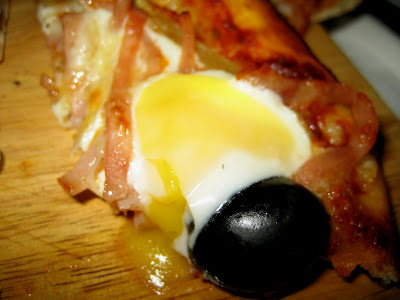 I cannot sing enough arias to describe the composition of egg left to cook on an oven-fresh pizza, the runny yolk carelessly handled so it glides slowly but surely to fuse with the other toppings on the pizza. Just look at this work of art! I could barely wait a second longer to consume this in one swift movement, together with the rapidly coagulating golden yolk.
It was a good evening, the service friendly and the total bill a very gracious RM126. The place seemed awkwardly quiet though, next to the crowded Deutsches Gasthaus. Let's hope the deals are enough to draw back a respectable crowd soon.
Guzzle is located on the ground floor of Metropolitan Square in Damansara Perdana.
Posted by minchow at 9:10 AM

ooooh, i've been wanting to head here for the past few months, but i've not managed to yet. that mafia pizza looks SENSATIONAL!!! it's now on top of my must-try list! :D
btw was sad to hear that bellaroma had closed but i recall being annoyed that they only served beer and no other alcohol. this place looks way more tempting. thanks for reviewing it! :D

lol at Nic's comment! Harlo uncle! its where u went for the friedchillies award night!
Min: u been to maria's yet?

the quail egg is making me drool. Both pizza looks great man! Why I can't find it at Penang?? *sob*

Must have been a darn satisfying pizza with the runny quail eggs! =)

I don't normally eat pizza, but I'd definitely eat this...the runny quail eggs look divine! Then again, just give me the eggs and hold the pizza, tq.

Very practical as normal eggs won't do. Like a cherry toppings. Pleasant to the eyes.

hmmmm, bellaroma's pizzas esp the lamb one was pretty good though for me. Maybe they're the same kitchen. Sounds great, must go check it out with friends as their office is just upstairs.

Looks like a nice place for a drink. Quail eggs with pizza? Sounds interesting, hope to try this out soon!

I believe it's a nice place to hang out with friends.

Joe, one egg (and not a smidgen less!) perfection!

Sean, yeah I was actually after wine that night and even though they showcased entire cabinets of empty wine bottles, the wine list was non existent. I think they had one house pouring red and white, so it's not too comprehensive a beverage menu. Ah well, we can't have everything I suppose!

Nic, haha the wonders the runny egg will do to resurrect your memory! I just had another runny egg epiphany - moonlight hor fun! Need to get my hands on that ASAP.

Nomad Gourmand, actually checked it out before we decided on Guzzle. Menu and the interior of the place looked abit lacklustre - also the beverage list wasn't quite up to par. Waiting for someone to blog about it first :-P

Allie, hey I think you CAN find yummy pizzas in Penang, esp if you're willing to fork out for it. Mario's and Peppino's make decent ones!

Bangsar Babe, yes think I'll head back for the pizza deal again. It's just the right portion for one too!

LL, quail eggs rule on its own! Without the eggs, the pizza's pretty unremarkable on its own, the crust only so-so.

Worldwindows, and and how great does the egg look propped up against the magnificent black olive? Sublime!

Boo_licious, I suspect it might be the same owner but then again I don't recall seeing lamb on the pizza menu. Let me know how your visit goes!

Sugar Bean, yes I am lusting for it all over again! And it's spot on lunchtime!

Little Inbox, very chilled out place, and the lack of crowds and loud music made it great for conversation while we stuffed our faces!

i love the bloody mary's on the MAS flight..they make it so strong it whacks u into oblivion! after glass two.. it's like goodbye crazy world! Think it's so they don't need to keep serving you.. haha