Kin San Kichi used to be THE place for a good cheap Japanese feed, kinda like the Hokano of yesteryears. I remember coming here when they still permitted smoking indoors, the place permeating a wonderful mix of odours from the BBQ tables and the open-air kitchen inside. It was often brimming with in-and-out diners, queues forming in the early evenings. Most of all, I remember how we'd constantly end up being pleasantly surprised by the tab at the end of the meal.

We were looking for a quick bite in the area before proceeding with the evening elsewhere and stumbled in here. Not much had changed after a number of years. The restaurant manager (now possibly part-owner), whom I remembered as a very friendly and efficient young lady, was still around, looking significantly wiser and more matronly. The menu's looking slightly spiffier, no longer those clumsy clear plastic folders but the prices remain pretty hard to beat.
Our orders were generic that evening but suffice to say, there are plenty of other goodies available on the menu, including a very affordable BBQ set, value-for-money sashimi sets and they do a decent version of my favourite grease trap, tonkatsu curry rice. 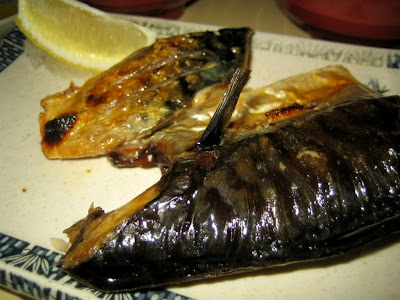 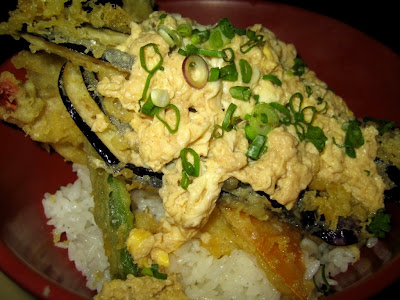 Riz got the Ten Don (RM14). I forgot to get his take on it but there can't be much wrong with it, nor much great either, I suspect. 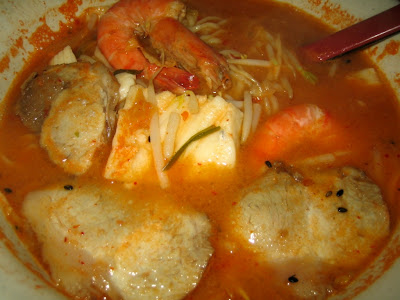 Kimuchi Ramen (RM18) - a steal with 2 x medium prawns, fresh fish, 3 x meaty chashu in a spicy broth. It was a tad salty I felt, and made me very thirsty. Also, the requisite bite from the ramen quickly deteriorated when left to sit in the broth a touch longer, a note of its quality. 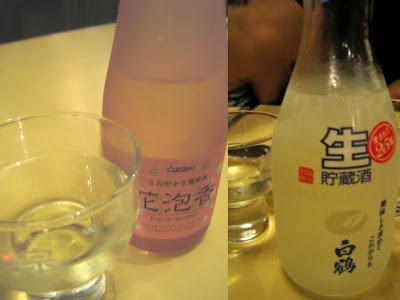 Sake on the cheap! Left: My Ozeki Hana Awaka (Sparkling Sake) and Riz's Hakutsuru Nama. Ben's order of Shochu by the glass as well as Hui's Asahi were both a very moderate RM10++ each.
We probably didn't order the right things to truly render this a worthy revisit of Kin San Kichi but it's heartening to see the key cornerstones of this humble little restaurant remain solidly grounded. I should be back to give that nostalgic curry rice a go!

It's sandwiched between Aoyama and Cavells, diagonally opposite the open air carpark behind KK mini-mart, on the other end of the same row as Finnegan's.
Posted by minchow at 12:05 PM

i've only eaten once, but i kinda prefer the other japanese restaurants on this row (aoyama and sugimoto)... maybe cos i love makis and those two place offer more creative choices for their rolls... but i guess kin san kichi must have its merits, since it's stood the test of time...

hartamas got so many restaurants lah .... hard to pick.

but heard more of Aoyama, so should be 1st choice.

the sparkling sake looks interesting! how'd it taste like?

Thanks for sharing...yet to venture into this area.

Haven't been there for ages too and I call it cheap and cheerful Jap food. The salmon sashimi is always a good deal here too.

the sake is cheap leh, RM20 for both. Is like ordering "tuak". I would prefer sake than tuak. If you are going again let me know. I wanna go tapao the sake.

Recently I checked out a new Japanese restaurant in Plaza Mont Kiara, I think it's called Ogawa Japanese Kitchen. Good food ... and they serve heavenly sized fried oyster for RM10 a piece ... I am reviewing that place next !!!

Didn't know why but the presentation of the ten don looks a little intimidating to me. Haha! Love kimchi ramen a lot. So many good eateries in Hartamas area!

why cheapskates.. good food, low prices - great find i say! this is how ppl should eat:D

Sean, oh agreed.. I don't think this is actually in the same league as Aoyama and Sugimoto. The cheap as chips pricing is just too hard to beat!

J2Kfm, yup I wouldn't place Kin San Kichi as first choice... really went back there for nostalgic reasons more than anything. All this talk about Aoyama is getting me hungry...

Allie, oh it was really easy to drink! But I still prefer my sake warm and still! :-)

CK Lam, I see you've been exploring many KL corners yourself! When's your next trip up? Maybe we should do Hartamas then?

Boo, yes, definitely cheap and very cheerful! And it's very in-and-out as well, so get in, sashimi served, sashimi eaten, kthxbai!

Steven, sake how to tapau?? I think we can buy them from Jap specialty stores for even cheaper :-P

Timothy, ooh thanks for the tip! Is this where Zakuro used to be? Really ought to pay the ol stomping ground a visit one of these days.

Ciki, hear hear! Cheapskates hold no negative associations for me... why pay more, I say?