The Return of Rationale, Saifon Thai

Rationale, how I've missed you! I have been hiding in my nostalgic soft-focus cloak of despair while you, my friend, have escaped me in harsh, functional reality.
So having finally come to grips with the fact that I had been oblivious to some jarringly bad elements of a gig turned sour, preferring instead to assume foetal position of idealized despair, I now seek you out, face to face, beyond my comfort zone. 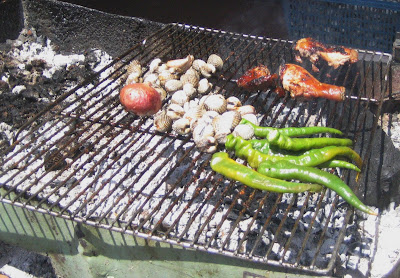 Welcome to Pandan Indah!
We had been disillusioned for a while with the Thai offerings in our neighbouring areas so Toto gamely suggested we did what any reasonable tomyam-deprived fellow would do - venture elsewhere. We hit up Pandan Indah, a fairly foreign expanse and thanks to his competent use of Garmin, we found ourselves in this bustling, but not particularly sexy neighbourhood. 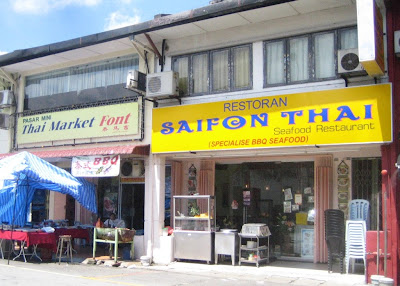 We had read plenty about Baan Nok seated above the Thai mini-market and when we sought out the staff manning the noodle stall and BBQ pit outside the minimart, we were informed that Baan Nok had, in fact, moved next door to spanking new premises and renamed Saifon Thai. 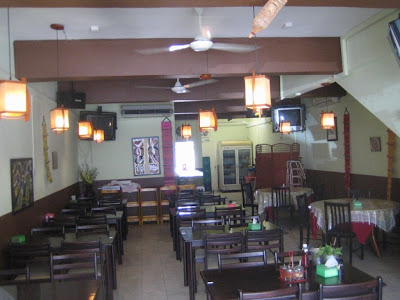 Now we had made this journey for tomyam so imagine our collective anguish when we entered the air-conditioned and empty new space and then told there was NO tomyam served at lunch! Wait staff informed it was "too early, tomyam only from 3PM." Of course, there was the option of leaving and heading somewhere else with tomyam but we concurred with logic - it was 1PM, we were starving and also curious about the commotion going on outside. 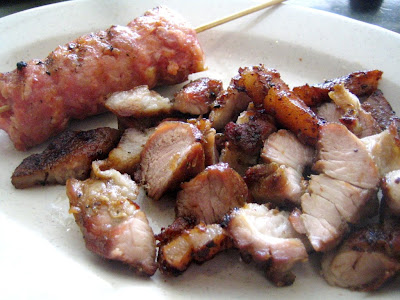 The BBQ pit was a perfectly rational Plan B - an array of pre-marinated meats beckoned, including pork and that's always a start to wonderful things. We grabbed a pork cutlet and a minced pork skewer and the grill master brought us halfway back to Siam. Not the best I've had - felt the pork was too tough and could've sat in the marinade a while longer. 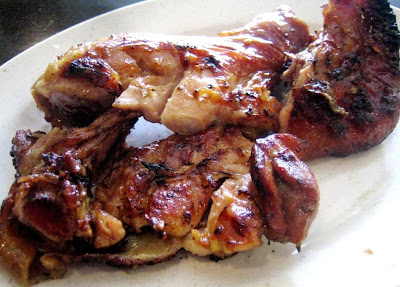 On the other hand, the BBQ chicken thigh delivered redemption. Transported us back to the side streets of Bangkok where the beer flowed free and the meat proudly basted in dignity. 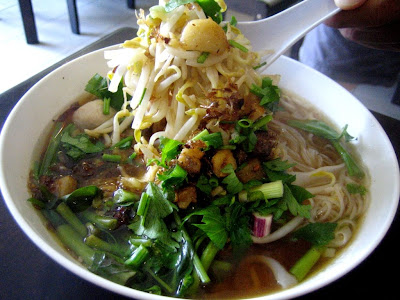 The rice noodles in soup reminded us of happier times, stumbling drunk down Rambutri, all caution thrown to the wind and seeking the warmth and nourishment of a bowl or two before hitting the sheets. It tasted just as good, if not better, lucid and sober. 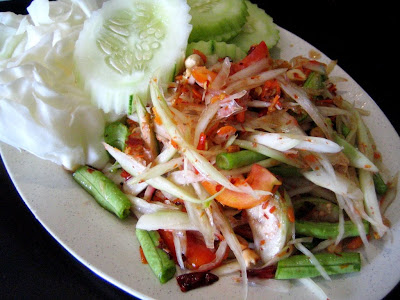 The Som Tam was decent too and I liked that they used Thai Eggplant (Makuea Praow) here. The level of spice and zest was a sensible balance. They could've sliced the vegetables a wee bit thinner though - I felt like a goat chomping on these fibrous chunks! 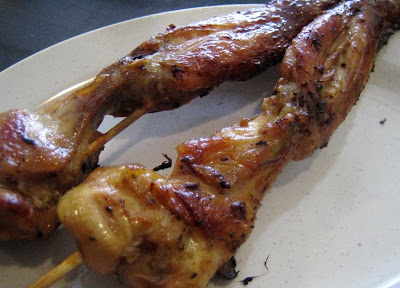 We left the chicken wings to the end when were stuffed and had to contend with our friend Rationale once again. Took them away, so Toto had the privilege of enjoying this while watching some football match or another.

We would have to come back for the tomyam and the rest of the interesting items on the menu. Despite the bizarre tomyam serving times, Saifon Thai turned out to be a perfectly sensible choice, a paragon in the heart of alien surroundings for a clear-headed reunion with rhyme and reason.

oooo.. saifon! looks like the food dropped in standard though. how come u didn't do the killer tomyam?!

u didnt eat ur way rite to 3pm n ask for tom yum?

i suppose the fact that they said that they couldn't serve tom yam immediately meant that they didn't use instant tom yam paste. Hooray! :-D

so a major dose of spice is what helps boot u out of your stupor? maybe i should try it! i feel like i've been going thru the motions for YEARS now, like a dog endlessly chasing its tail.
only problem is, i DON'T like tomyam. heheh :D

Ciki, because tomyam wasn't going to be served till 3PM! Don't understand why - tomyam should be served 24 hours!

Joe, nope! I had to be particularly rigid that Sunday because I had to clear some work!

LL, I suppose that's fair speculation! Or... the chef's a late riser and 1PM's too early for him to be in the kitchen!

Sean, past experience has proven that nothing kicks me out of irrational moping better than a jolt to the senses! Like Tomyam. Or a new hot companion! Both together even better! ;-)

I do beg your indulgence in allowing me to share what Sai Fon means. In Thai, it means Gently Falling Rain, and HM King Bumiphol composed a slow jazzy number (and jammed with Benny Goodman).

The name itself brings on an air of nostalgia and a lot of happy thoughts. I must go there soon, to try the food. You must have heard this before in Thailand.

That's what happens to "hidden" eateries when they've moved into bigger and brighter venues. One one hand it's more comfy for patrons, but food never taste as good as they used to. Something's gotta give?

PA, that's a lovely wistful tune.. I can't say I've heard this in Thailand but perhaps I wasn't paying attention. I love how the Thais have a concise word for Gently Falling Rain - figures that they have a pronounced sense of aesthetics.

Qwazymonkey, I do hope the standards haven't slid that much! The tomyam's the litmus test! *Fingers crossed*

Thai food as a form of nostalgia. Nice. I'm still seeking the tomyam of my heart, hehe.

I was wondering too how come no tomyam served until I read the comment above...

the food sure looks like those we can get in thailand, rather authentic looking me thinks!

OMG! You and RasaMalaysia both got me craving for Gai Yang!

LFB, are you sure the tomyam of your heart isn't already prancing around in Prada in front of you? HAHAHA!

Cariso, ya loh, very upset that I missed out on the tomyam but never mind, will be back for it!

SC, the street food offering in Thailand does induce joy on so many levels! Wish we didn't have to go to Pandan Indah for it!

Unka, time to chow down some real Thai then! You and PA lead the pack!

Haha..thks to u maybe i can get Unka to drive all the way here for food. We nd to venture out of PJ!!

Pps. There is actually a Thai supermarket!? I like!

Its good that you have disembarked out of your discomfortably holed up position and Thai appeased sufficiently !

Saifon Thai restaurant is not as good as imagine. I have diarrhea after had their meal. I thought the food is not clean
P.s Price is too expensive