Come crunch time, we tend to forget the things that mattered or meant something just yesterday. Like neglecting your parents when you're deeply lodged in some silly emotional tribulation. Or how the routine session with friends gave you a new lease on life when you were relentlessly fixed on wallowing in despair.
An apt case in point: a late-night conversation with a friend recently discounted a relationship which had been intensely intimate to obliteration, simply because he couldn't deal with it in, granted, his galling circumstances. "(It) wasn't even a real relationship, I don't know what it was!" he stammered, when confronted with how he had abruptly upended it. 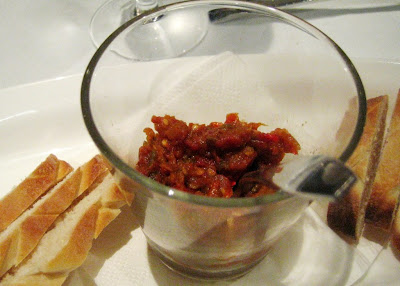 Similarly, it's easy for us to mark down the good-tasting dishes delivered in the wake of the bad at an eatery. Such is a reminder I would like to enlist for Dubrovnik, which delivered more than it failed this one despondent weekend. 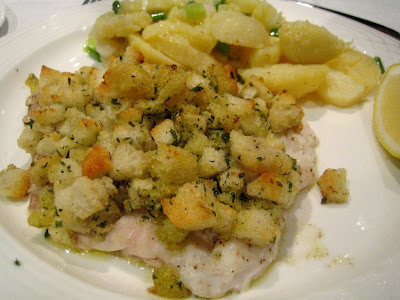 Fish in the midst - I ordered a new entrant to the menu, Riba Romesco, baked seabass with breadcrumbs served with a mountain of potatoes. This was commendable - the fish fresh and cooked to a tender quiet, the accompaniment sufficiently light yet ample. Like nights in with a loved one requiring no charades. 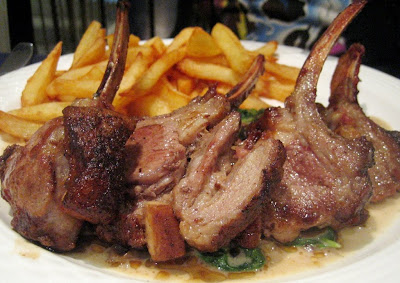 Ciki had asked for Lamb Chops even before she arrived so this couldn't have failed. Pretty much like the promise of a smile that releases persecution of all that's perverse. 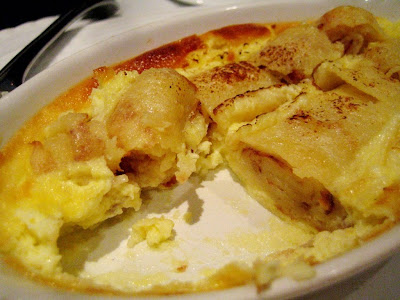 PA made a stand with Palacinke, crepes filled with -egg and dairy, a requiem to a dream. Ahh, this is stuff that sordid sex is made of. You cannot get enough of it, even when it gets too cloying and convoluted. 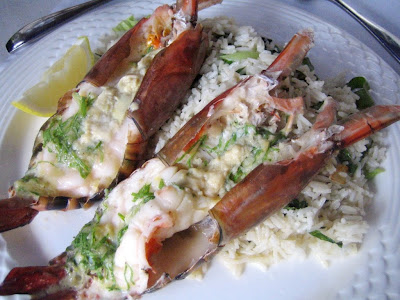 The Kozice, a dish featuring fresh water prawns with Mediterranean rice, was akin to the collapse of the Kingdom of Croatia. The prawns were overdone and the rice was a sad, flavourless mass. Not too different from the arguments and the disagreements that persist in any accord. Do we dare compromise? 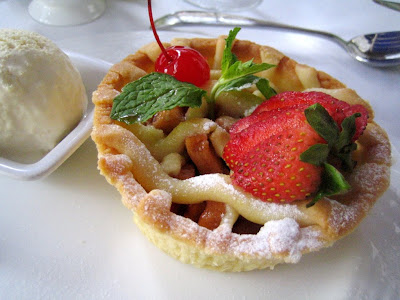 We gave desserts a shot and the Apple Pita (Pie) reinstated our faith in the gentleness of flour, cinnamon, fruit and sugar. Same ingredients of a winning concoction to intimacy, really. 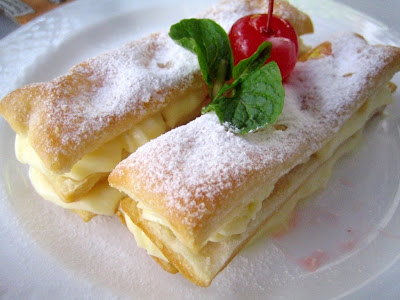 The Mille Foglie received lacklustre affection. The pastry sandwiching light vanilla custard failed to provoke the passion so palpable in its predecessor.
No matter how convenient, don't throw the baby out with the bathwater. No giving up on Dubrovnik yet, until it proves itself to be a certain undoing.

very interesting parallels between food and love. the sad part is that it's probably easier to get lucky with food than with love...
i'm rooting for dubrovnik, if only because it's the only one of its kind in kl. for better or worse. =)

It's funny how Dubrovnik is great yet kinda bad at the same time - This dinner draws parallels to one I had there with my friends some time back.
(Half the table was impressed and the other half felt unsatisfied...)

Lovely Post. May I say, and ode (or requiem) to love. As we meditate on the impermanence of life, we too must mull on it's imperfections, and how greatly we should treasure beautiful moments like dining with two friends in a Croatian Restaurant in KL. In complete freedom , not having to impress anybody and just being our silly carefree selves. It is incredible how a few charges of electron in a transistor, connected to the much maligned internet had brought us together and created that beautiful lunch.

It was a great pleasure to dine with you and Ciki. May there be more!

this place is still tossing and turning i see..havent stepped in, seems that the water is still so choppy, i wouldnt want to risk having motion sickness at the rough seas.

Sean, a painful reminder but yes, love is definitely more rare than food that inspires the same. If only those who found it didn't choose to squander it in pursuit of some godawful exercise in material validation.

J, I've only been there just this once and it's a mix of both good and bad. Totally happy to give it another go! :-)

PA, how true that rings! I am still bewildered by how the Internet & random postings of what we ate have led me to meet some pretty amazing, inspiring people. More silly, carefree meals to come, for sure!

Joe, haha, yes, their inconsistencies seem to persist with menu changes as well so I'm really hoping they knuckle down on their strengths!

Food is essentially emotions served on a plate eh? Least with food, its easier to dispose em off.

Ciki had asked for Lamb Chops even before she arrived so this couldn't have failed. Pretty much like the promise of a smile that releases persecution of all that's perverse..

hahaha.. eh, u got 2 teach me how to do that one.. the smile that releases persecution of all that's perverse..

Pure Glutton, the lamb chops WERE divine, got the thumbs up from meal owner! Definitely something good here to hold on to!

Qwazymonkey, you said it! And if the food is unpalatable, it's quite easy to spit it out, as opposed to emotions!

BBO, very true. I suppose the idea isn't to win all the time. Just most of the time :-P

Ciki, see but that's where you're wrong! You can't be the one judging the smile! It has to be the person on the receiving end who gets uplifted by it! Ask Josen!

hmm so its a love hate relationship thingy?

Good, unbiased view. I have always been fascinated at the prospects of dining Croatian style, or Austrian style, or even any of those Mediterranean restaurants in KL. Pity us in Ipoh are not blessed with any other cuisines, aside from the generics.

Vialentino, hope you get the hits rather than the misses if you do decide to give this a try!

Babe KL, nah, no hate whatsoever. Just the observation that love has to endure plenty of pain and filth as well!

J2kfm, but you're in KL fairly often aren't you? Just make this on your hitlist next visit!