Found myself at the receiving end of a thorougly unexpected and isolated ambrosial weekend, thanks to a perplexing benefactor. To complement the activities which yielded some serious Q&As of this sticky organ we call the heart, it made sense to take time out to drive to Indon joint Surabaya in the unfamiliar territory of Sunway Mentari to challenge our threshold for spice. 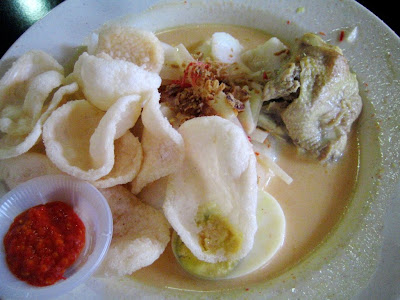 The Lontong Cap Gomeh was a jerky start to Surabaya's liberal lashings of nerve-numbing chillies. The chicken stew, cushioned by dense rice cakes and sliced root vegetables were a winning and reassuring broth in milky, nutty broth. 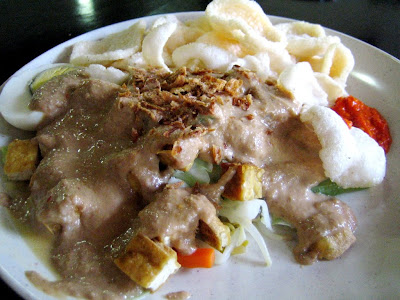 I relied on my benefactor's authority to weed out what was good on the menu based on an illustrious outing here not long after it opened. He was generous with his praise for the Gado Gado and he wasn't far off. The combination of just-blanched vegetables enveloped in a disarming creamy peanut dressing, best paired with REALLY hot chilli sauce. 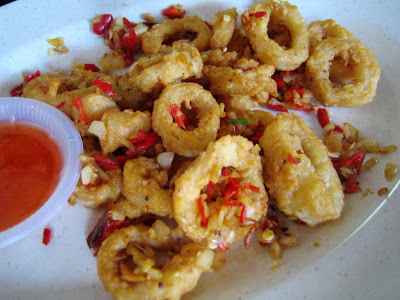 Also highly recommended was the Cumi Goreng. It arrived a rather modest serving of golden brown battered squid in sliced red chillies and garlic. The squid rings were scrumptious, although he felt that it was a step down from what sold Surabaya at his first visit. 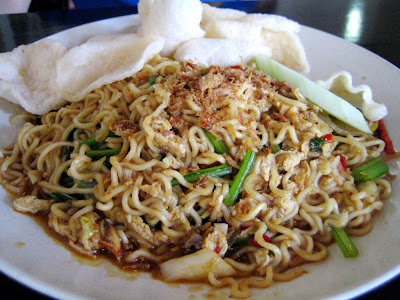 He also ordered the Mi Goreng Surabaya, which was truthfully, a bit of a disaster. It looked like mamak mi goreng and tasted no better than a mediocre midnight version, compensated only with more chillies. Definitely not for delicate gastrointestinal systems - we left most of it to waste. 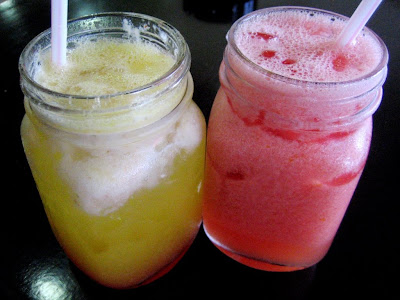 With the tastebud massacre, we were only too happy to neutralise with plenty of liquids. Surabaya's beverage menu is a Technicolour dream, featuring a drink in every shade of the rainbow. We had the Yellow Dennis, a pineapple, lychee and longan brew and the agreeable pink Red Stop, a thirst-quenching blend of watermelon, strawberries and tomatoes.

And so with our hunger placated and our tastebuds anaesthesised by the profusion of spice, we skipped out on the rain-washed roads and headed back to our elusive (one time only!) weekend pilgrimage of pleasure and promise.

i used to get sunway mentari and sunway damansara constantly confused. but no longer, heaven be praised! :D
gado-gado is probably my favorite indonesian dish, but i'd just stick to the peanut dressing without chili sauce. your mention of delicate gastrointestinal systems reminded me of how a recent encounter with super-spicy sambal belacan left my stomach churning for 24 hours!

Wooo... i now know where to go if i want nerve-numbing chillies!

waaat.. u come to my part of town, never call me one! chis. don't fren u:P

The lontong seems to be appetizing!

Sean, you mean Mentari and Damansara are two different locations? I still can't tell the difference! The peanut dressing is mild enough, stay away fr the chillies!

Pure Glutton, one of them options... this or some Szechuan chilli hot pot I guess, haha!

Ciki, eh since when was this part of town yours??? I thought you were in PJ!!

Cariso, I hv to say hands down, that the lontong was one of best thing we ordered!

Yummmm... Salivating... I'm guessing some of the dishes are rather spicy (especially the first two)?

Oh dear. As much as I like spicy food I think some restaurants take it a step too far...
(Tongue numbing = cannot really appreciate the taste of the food, don't you think so?)

That mee goreng looks like a wet mess. Poor you! >.<

June, thanks for dropping by! :-) Both dishes were actually OK by my spice threshold on their own, but slathered with the chilli sauce they provided, pretty much turned the heat on!

J, sometimes we just need the overkill, don't you think? My meal partner was somewhat disappointed by the meal but I certainly wasn't!

Bangsar-babe, yes yes! A wet mess! I couldn't have put it better myself! Stay far far away from it!