The mad state of Klang Valley traffic sometimes leaves little option but for us to stick to the vicinity of our respective neighbourhoods, no matter how dire the offerings. Where I presently live, Taman Desa (for god knows how much longer, at the rate my long-suffered property hunt is progressing) is not exactly a culinary treasure trove. It does, however, have a smattering of local haunts that serve a decent meal, some of which may even surprise the unsuspecting headshaker.
One such is the local Italian (or well European, considering the family who runs the joint comes from Montenegro), the aptly named Paradiso. I first read about Paradiso at Cumi & Ciki a while ago and at that time, was stumped to have ignored it for so long.

The menu is a humble sampler of the usual pizzas, mains and pastas. Pizzas are a safe bet here - the ingredients are bountiful, fresh and during all my visits here, whether to dine in or takeaway, take no more than 10 minutes from oven to table. Too easy and enticing for me to not call upon Paradiso to fix the prosaic problems of the working week. 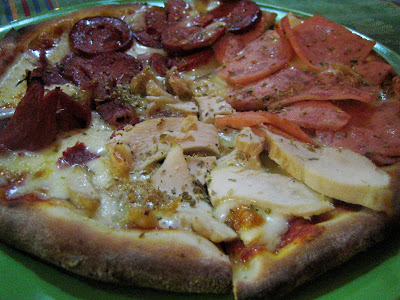 Did the PC really die on me without saving the document I'd been slaving over for the past two hours without saving? Who you gonna call?? The Pizza Quatre Stagioni (RM25) satisfies midweek rage topped with beef pepperoni, turkey salami, chicken and smoked beef. 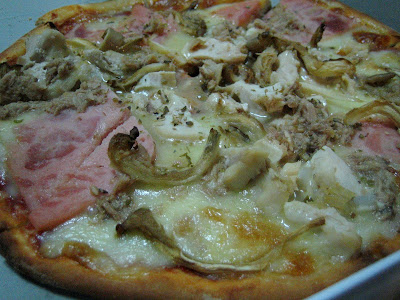 Was that another request for a revision on a plan after you had just submitted revision #375? Stick it to the system! Choose your own toppings for RM29 - here, we went with turkey salami, chicken, mushrooms and tuna. 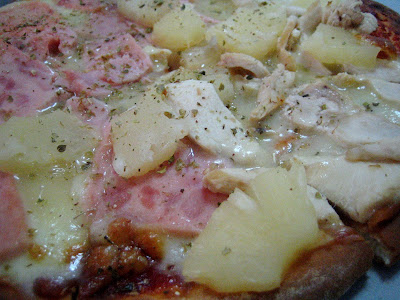 Just when you thought you had earned the day's wages and the client just called to seal another evening in with more documents to write? A takeaway at Paradiso will sort you straight, which was what this Pizza Paradiso (turkey salami, chicken and pineapple) did. 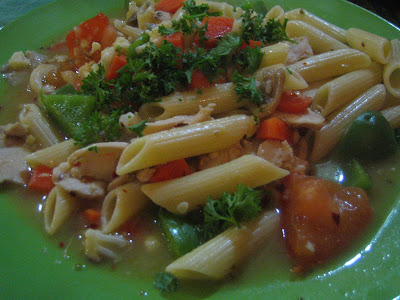 And on peaceful weekends plagued by the dreadry prospect of a combustive meeting first thing Monday morning? To Paradiso we go! The Pasta Polo (penne served in olive oil, vegetables, chicken and garlic sauce at RM19.50) is comforting but a shade too pale compared to the sturdy pizza offerings.

So what's your local fix-it? Before you write off any of the little-known neighbourhood joints, take a little walk around and who knows, you may just find that little whiff of paradise, not too far away from your doorstep, like how I found mine.
Paradiso
5-0-2 Jalan 3/109F
Danau Business Centre
Taman Danau Desa
58100 Kuala Lumpur
Tel: 03-7981 9996
Posted by minchow at 2:30 PM

sadly, from where i stay, i cant find any, or maybe i need to look around harder with a car..OR maybe i should just go find this place since tmn desa isnt all that far for me.

Hey, I live at Taman Desa too, neighbour! Let's meet up for a meal or a drink some day. You went and got me craving Italian for tonite... ;)

great place! we love eating here.. been so busy have not had the time to go back recently. maybe shld bring kenny since he lives so near :P

Sean, now that you put it that way, Tmn Desa does seem to hv a fair bit going for it in the food area. I think Woo Pin is overrated, and Cafe Libre needs to get more airtime!!

Nahri, you KNOW where it is! Tis not Saujana! Let's go, stat!

Worldwindows, you can say that again! :-)

J, they have a very limited selection of canned beers but pretty sure can BYO. Ooh I might just do that next!

Joe, come to Tmn Desa! Or well any of the neighbouring Old Klang Road suburbs will do too. Plenty of stuff to keep us fed for the week.

LFB, so didja go, didja? What do you guys think? We should scour this neighbourhood down and leave no joints untried!

Ciki, I remember this was about the same time I started reading yr blog regularly - I was so blown away that you found absolute hidden gems like Paradiso!

I think the soul of any city is reflected in the little joints around the hamlets that houses their inhabitants. Much more than the glitzy Michelin starred or Michelin wannabes. I am glad that there are many places in KL where you can plonk down and have a meal with my favourite book, in my favourite tattered shorts and T's or share a conversation with my favourite people.

This place looks ravishingly good, with rustic food (from your description). The question is, will I be welcome in your hood? :p

Happy hunting for a new pad, but methinks you will not stray far from where you are now.

lol that is nice! I had a fix of giant burger here in KD! :)

The cut of the meat was thick but the pizza base is a bit too thick, i prefer thin crust :P

Taman Desa is a nice place to say what, I heard.. so convenient to everywhere :P Haven't been to Paradiso yet, but I'm a fan of Italian food so I'll surely be visiting it one day!

wow... the pizza is top with chunky ingredients. Never try this before. ^-^

hmmm...the toppings doesnt look too "cooked"..like it's jz slapped on the top?

nice to see you there last night! what a coincidence.. do come here often? :P

looks porky...you mean none of it is? chis.