Langkawi the trip sped by in such a daze. One outing that we managed unaided by alcohol was the visit to the island's very own, very famous cheese-producing Friendly Farms. Due to an inherent deficiency in cheese appreciation (fine on pizzas, not on much else), all opinions on taste & quality henceforth are those of my trusted dairy-loving companions, Mei Shean and Hui Hsien.

Now, Friendly Farms isn't all that hard to get to (where is in Langkawi??), but the lack of proper signage and its ridiculous proximity to its competitor Buffalo Park can be deceiving. It's about 10 minutes away from the airport, follow bright signage to Buffalo Park - which was exactly what we did. 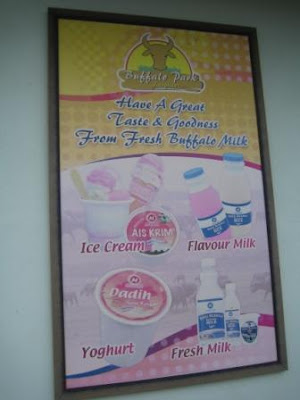 Buffalo Park has a huge welcoming sign up front but study the merchandise and you will find it lacking of the main thing we came looking for... mozzarella cheese! Upon prodding the reluctant staff, we found out that the place we were looking for was actually situated further down the narrow road. 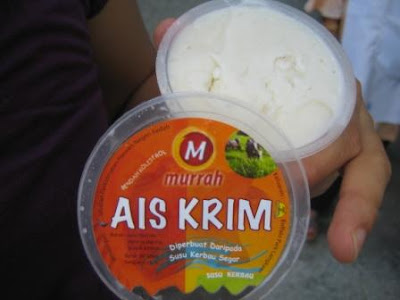 Nevertheless, we did not leave empty-handed. Hui Hsien, ever the generous dairy fiend picked up a single serve of vanilla ice cream, made from fresh buffalo milk. Tasted just like the regular thing, said she.
We took the first left turn further up the road only to reach a very unassuming T-junction. Mei Shean had very wisely saved the number of Yana, the co-owner of Friendly Farms and made a call just as Yana was driving up the same narrow road. The correct direction, as it turned out, was to turn left after Buffalo Park, go up the road and take another left. And lo and behold... 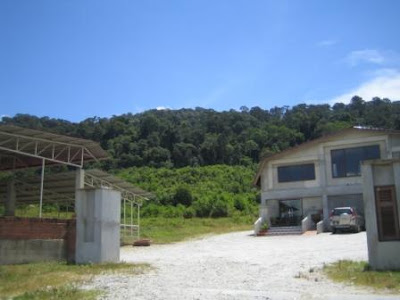 ...there stood the humble manor, no welcome door mat, nothing like that. Somehow, the air smelled different. Manure, yes, there was some of that. But there was also the smell of pride, of success attained through real hard work, of the triumph of the underdogs. Or maybe it was just cheese?! 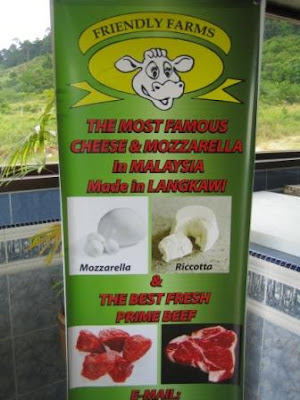 Just about the ONLY promotional signage of Friendly Farms we saw on the whole flippin' island... INSIDE the farm. 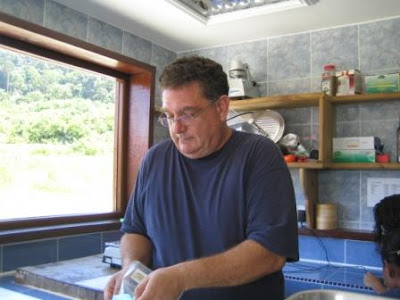 Michael, the friendly proprietor was very patient, taking us through a comprehensive explanation of his produce. Neither he nor Yana apologized for the lack of signage and we got the impression that they weren't too hard up for pesky walk-in tourists and casual shoppers. They had, after all, regular orders by the kilos from the kitchens of many a five-star hotels on the island. 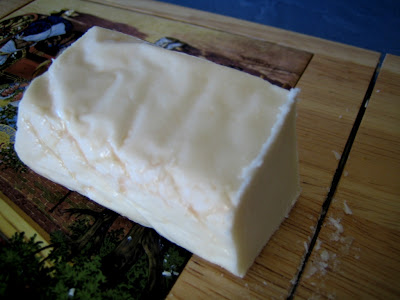 Busy as he was, Michael was very accommodating and offered my two hungry companions a taste of his produce. This was a soft and young goat cheese - very mild. 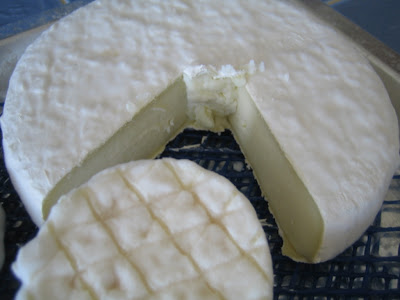 Michael also showcased his version of Camembert, made of goat cheese. Very subtle, could sit around a wee bit longer. 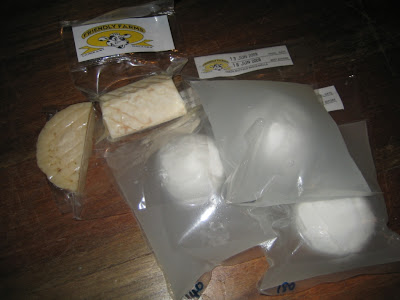 Part of the cheese stash back in the hotel. Both of them bought enough cheese to clog up the tiny fridge in our hotel room, necessitating the urgent deployment of ice buckets to chill our white wine and beer. 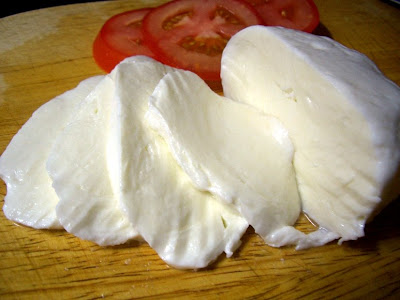 Back home, both savoured their collective prizes from the trip with gusto - Mozzarella by the balls. Michael had explained that the real meaning behind Mozzarella was "a thousand tiny bites" which meant that the real fresh stuff, when bitten into, should be toothsome and offer plenty of spring. 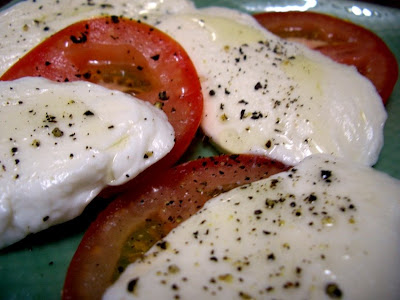 "Mild and pleasant on its own. But creaminess came through with the sweetness from tomatoes, fresh ground pepper, olive oil & pinch of salt" - Mei Shean

"...chewy and rather milky but I ran out of olive oil so had to substitute with grapeseed oil which altered the taste...the texture was a tad rougher than the imported ones but nevertheless not bad for a kerbau Kedah!" - Hui Hsien

While I obviously did not get much taste-wise out of this little detour, I was bowled over by how they made cheese Langkawi's very own. Now, how about those booming schemes to realize your own crazy dreams?? Nothing is too far-fetched, anything really is possible!
Posted by minchow at 9:30 PM

Been to Langkawi but totally didn't know about this place. The cheese looks good, would mark this down and visit this place if I have the chance.

wow yr frens sure knw their cheese!
No prob at the airport frm bringin them back?? So my nx trip is Choc, cheese and bottles!

interesting glimpse behind the scenes!
btw your post dovetailed nicely with our former pm's most recent blog entry: http://chedet.co.cc/chedetblog/2009/06/sound-bites-3.html#more

This is cool! I never know there's such a farm in Langkawi. Thanks for sharing.

went to langkawi but i din know there is such a nice place like that. the cheese does look good. are they pricey?

Sugar Bean, this is my first time on the cheese farm too, despite many previous visits to Langkawi. Really amazed by how enterprising it's turning out!

The Nomad Gourmand, no problem whatsoever at airport! Ooh another tip... I refrained from smuggling extra bottles coz I was worried going thru LCCT and no one even batted an eyelid!

Sean, OMG you're right!!! I feel light-headed just from that association! You think Tun would mind me linking up to his blog? Teehee!

Little Inbox, a new find for me too! Although if it hadn't been for my cheese-loving friends, I wouldn't have gone very near here myself!

Ciki, don't you just love the stark contrast of the red on white? Too pretty!

Ai Wei, Hello!! Thanks for dropping by! They were reasonable, in comparison to what we'd pay at the delis here in KL. About RM10 per 100g for the mozzie.

Mozarella cheese produced on our local island?? Wow. Things one can learn from a foodblog!

Mmm, the best mozzarella I ever had, I had it with horsemeat floss in Padua, Italy. Delish!!

Is pricing significantly different from the imports?

Never imagine seeing this scenario in Langkawi. Thanks for sharing. I am sure many food bloggers will be making their way there soon.

this is interesting! its a good opportunity to tour around the farm, and doesn't need to dig deep hole from my pocket to Europe...hehehe

thanks is indeed a very good sharing. Langkawi here i come!

Worldwindows, yes I think they got some press a while back. And our dear Tun M has been pimping him for as long as he has been Langkawi! :-P

Tummythoz, isn't it absolutely delightful?? Whatever next? A Malaysian avocado farm? A vineyard in KL??

LFB, Horsemeat Floss?? And it's delicious?? I think I'll just take your word for it! ;-)

LL, I think the stash in the picture came up to about RM70+. Very decent!

CK Lam, after this trip, I feel I definitely need to do more cuti-cuti Malaysia too! There must be more of these little gems out there!

Gill Gill, yup, it's still one of the most affordable getaways ever! Although that said, I am itching for my next trip out of the country... been bound here for about 2 years now!!

ah did not know this while I went there last year. ^-^

this is actually very good news! you know, i cant help but sigh at the madly high prices of exported cheese sold at supermarkets! this will be a good alternative and gives us more reasons to say cheese. :D

Ooh, I read abt them in The Star some time ago, was excited abt their venture. Proud1 Proud!
Yes, yesh, with love & passion, u can do anything (almost), life's too unpredictable & short to do what you don't like, go for it :D

Thanks for telling me about this place! I am definitely going to organize an expedition in search of this place!

Wow! Cheese in Langkawi?! This is an eye opener!

emm..how can i get to family farm??
where's the location..??

To the blog owner;
Hi, my class is planning to go for a trip in Langkawi for our final paper project n we're planning to visit the Friendly Farm... Can i get the contact num of the farm's owner from u?coz i've been searching for it in the internet but couldn't find it....

wow..
i'm so looking forward to visiting the farm during my visit to langkawi in october..
hows the price? cheaper than the supermarket stuff?