So much has been said about Sid's online (like here and here) that I couldn't possibly say better or differently. But I will say this - Sid's is the ultimate catharsis for mid-week pallor, induced by non-negotiable work deadlines and harsh office lighting.

Because we are sensible beings who know it is not proper to ingest pints of happiness without lining the stomach, we also sampled some of Sid's menu of hearty pub fare. 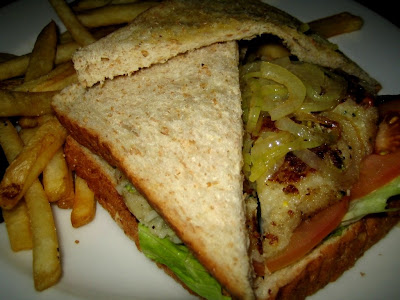 Selective vegetarian H's meal of Veggie Burger (or sandwich rather), bun substituted with wholemeal bread. S'okay, says she. Fries could be thicker, I thought. But good call on not stinging on condiments though, including a bottle of HP sauce all to your own table! 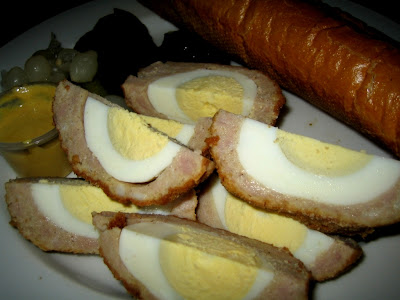 My Ploughman's platter with Scotch Eggs. It came with a fresh crusty bread loaf, which was the only thing that was remotely warm on my plate. Order only if you're trying to match the temperature of your beverages. It'd been years since my last encounter with Scotch Eggs that I just had to have this. 1 and a half Scotch Eggs down, I realised I could've done myself a bigger favour by removing the yolks. The mustard, gherkins and cranberry sauce were very apt accompaniment. 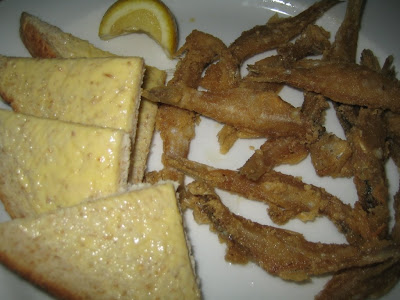 Whitebait fritters - we were expecting tiny, tiny whitebait so when this turned up the size of skinny sardines, we were slightly taken aback. Still, more bite and more flavour! I found the buttered bread triangles somewhat odd, but does add that homey touch, I suppose!

It's very difficult to limit selves once the guzzling gets going, especially when we're having so much fun feeding off each other's negative mid-week energies and nitpicking on the working day. However, we made it out by 11PM, smelling like roses and ready to do it all over again the next day.

You are quite a hearty F & B connoisseur , having fun with the black G and those Irish food (err from that Englishman hehe)

You're tempting me! Stuck in office, probably in same predicament as you (deadlines and stuff) and wishing for a cold lager. That's it...i'm going!

but guess they go with your pint rather well ...

a pint of guinness for me, please. i believe this is the ultimate end to the midweek blues. in fact, the darkest of it drowns my blues everytime, anytime! ;)

BSG, F&B connoisseur I ain't, merely a humble servant down the food chain who believes in play time!

LL, hope you're in warm and buzzy in the thick of the weekend now!

Nomad Gourmand, it IS Gardenia, right?? I am rather appalled, because their food actually deserves better accompaniment!

J2Kfm, the whitebait was actually OK, the bread was NOT!

Ciki, love the public hols!! More days to pack the pints in, yee-ha! Hope you're enjoying yours!

Nic, yes that "ahhhhh" that follows the first sip is unbeatable!

LFB, can't say no to good times for the everyday hero! Good to have you back!!

ohhh me and my buddy was walking about TTDI ..the pub we wanted to go to wasnt open..should have gone to Sid's. We ended up in Vintry instead.

Hey, this is my first time dropping by at ur blog. Nice blog. keep it up.

Do visit me at www.foodpromotions.blogspot.com

the food doesn't look inviting to me :)

I guess it's not really a nice place for food?

Teckiee, ooh Vintry! I haven't been yet! Might be the mid-week help I need this week!

Food Promotions, thanks for visiting! Do drop by again!

Kampungboycitygal, actually now that I'm looking at it again, it doesn't appeal to me either! Prob wouldn't order the same thing again...

Selba, the food probably isn't as much of the highlight as the PINTS!