After days and days of sedentary feasting, we figured it was time to put to use them trainers we lugged back from KL. So off hiking to Monkey Beach (Muka Head) we went. 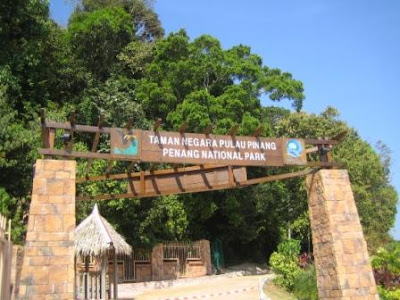 Penang National Park, gateway to some of the lushest offerings of Penang, away from its street food and crazed drivers. We took it slow and easy, as the other two had just been dragged out of bed from a very late alcohol-fuelled night. 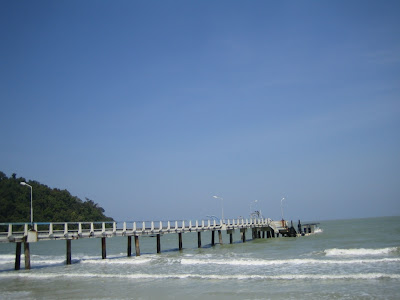 The mid-point of the hike, at USM Beach. I found this stretch nicer than the final point of destination, Monkey Beach. 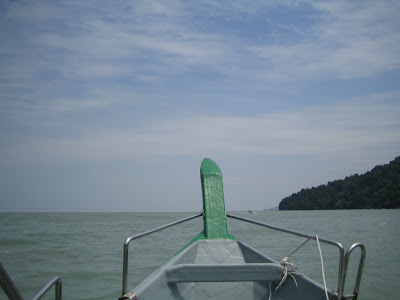 When we got to Monkey Beach, it was nearly 2.30PM and we were eager to get on to the next item of the itinerary for the day. So we called Pak Atan, resident boat operator and arranged for a boat to take us through choppy waters back to the jetty.
From there it was a 20-minute drive through the leafy, winding roads to the small, sleepy town of Balik Pulau, where the showdown of the two famous laksa stalls rages on. Much has been argued for and against either camp but we were intent on making our own judgement this visit. 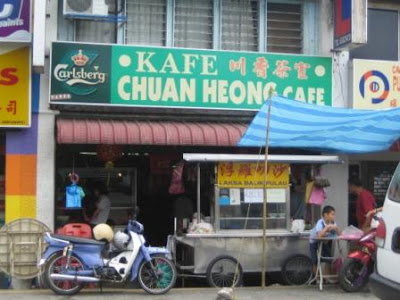 First up was the Chuan Heong laksa stall, previously operating outside wet market opposite. 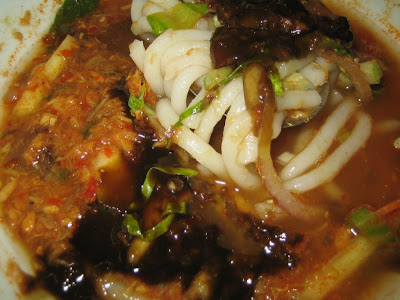 They had run out of Siamese laksa, so we all went for Assam Laksa. Upon first taste, a distinct hush of disappointment fell over the table. It was a pretty mean bowl of laksa without a doubt but having heard all that we had, and our levels of anticipation multiplied from that hike, it just didn't hit the mark. The kopitiam did serve up very reinvigorating fresh nutmeg juice though, which we downed with relish.
Next stop was Nan Guan's equally coveted offering, right across the road where we got our "cham" fix (mix of both Assam and Siamese laksa), washed down with yet more nutmeg juice. 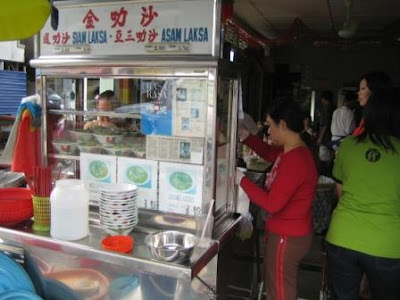 The single stall, single-handedly wowing hordes of visitors to the sedate little town of Balik Pulau. 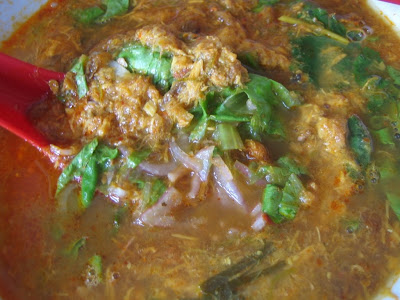 The verdict? Nan Guan triumphs, hands down. It packs a punch and a half, the bowl teeming with beautiful, simple ingredients, swimming in that bountiful fishy soup. We didn't hike just for this, but we could've and it would've been well worth it.
Posted by minchow at 12:37 PM

What a great blog on Penang Laksa. Especially when you did the comparision of the 2 stalls. Just love it so much that I'd like to ask if it would be ok if I adapt some of your blogs on my Penang pages.

If ok I'll start a Penang street food section on my website and start with you Laksa article.

I'll credit you for your blogs and photos, of course.

Passed by balik pulau during December and saw many people in the popular laksa shops there. But have not tried it yet. lol Thanks for sharing!

Malaysian Explorer, thanks for dropping by! You're welcome to use the post to add to your Penang page... anything to entice more interest in this lil' lovely island of ours!

LFB, there'll be plenty of detractors and naysayers so you may want to do both, just to be sure! :-)

Food Paradise, since you live in Penang, you can afford to wait till the tourist season tides over and enjoy a less crowded experience!

Little Inbox, yes, do take a leisurely drive one of these fine days, the nice route is not too far from where you live! ;-)

i missed the laksa though.

I'm looking at that assam laksa and going, Man how can that be disappointing? Argh what I wouldn't give....

I'm wondering whether there are a lot of monkeys in the Monkey beach :)

great to know where to go for great laksa should I ever have to go for penang for work again. and not only have the air itam one...

I tried to hike all the way to Muka Head but failed.. really very tiring lol. I fail

Another failure of mine is that I haven't tried any Balik Pulau laksa before, haha! Shy to call myself a Penangite

Duckie, it is quite a drive! Especially if you're prone to carsickness, like me! But the laksa is well worth it!

J2Kfm, really a wonderful hike for those inclined. It almost made me want to like exercise :-)

gnute, he-llooo!! Welcome to comments! I must rephrase disappointment, for the day after this trip, I went for laksa in town, and it was not an nth quality of the lesser of these two.

Worldwindows, yup, can't do wrong with either of these.

Jasmine, actually the Air Itam one is shrouded in mystery for me. I hear either extremely good stuff about it or extremely rotten. I should visit soon.

Vkeong, but you've tried gazillions stuff many other Penang folks haven't before, like white wantan mee and dry hokkien mee! That's the beauty about food blogs isn't it? We learn more, we eat more!

just the look of the laksa got me salivating..haha! yes, i'm an asam laksa slut...cant blame me cos it's not easy to get a good bowl in kl and sg.

hiking is a good way to burn those excess calories from the cny meals, i agree! ;D