A pint, or five, Online Pub and Brussels Beer Cafe

Some evenings, you just need that solid, no-frills pint, when dressy cocktails and uniformed wait staff just won't do. I was fortunate to have a friend point me in the right direction one night after work, to Online pub at Damansara Kim. 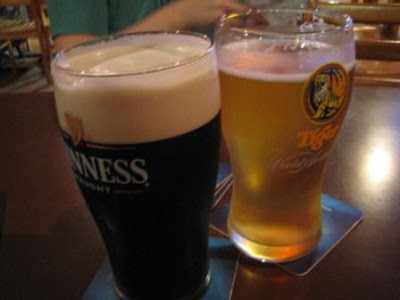 This is really back-to-basics pubbing - a working man's neighbourhood watering hole, where the beer's always cold, the satisfied "aaahhh" after your first sip always guaranteed. 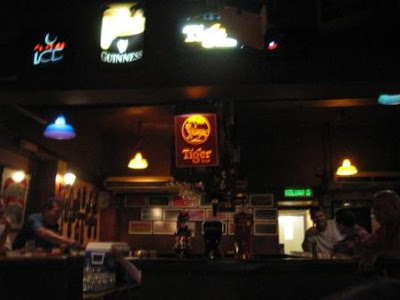 The central bar counter area, lined with old rickety bar stools. In fact, the place itself seemed a bit rickety as a whole, which is part of its charm. There is definitely a sense of having left that weight on your shoulders once you enter. No pretenses, no confusion over what the place is for - you come here for a few quiet pints after work before you bugger off home. 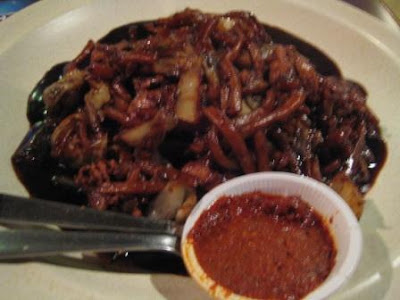 Apologise for this nasty piece of photography but by this time, I think I was well into my third pint :-P Online has a simple, sufficient menu and they serve up a mean lard-laden Hokkien mee. I think the intent is to make sure any inhibitions are shot, or as long as you're at Online - have a pint, have five! Fill up on lard, it doesn't count if it's consumed while intoxicated! 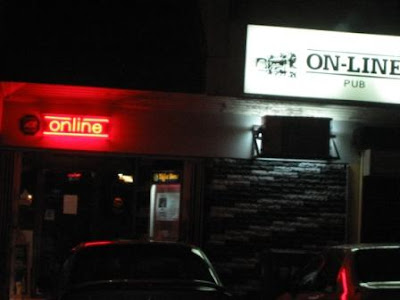 The exterior of Online pub, spartan and understated. Plenty of parking around in the evenings too.

Two days later, on a fine Sunday afternoon, we felt compelled to visit the famed Brussels Beer Cafe at Jaya One for some European ales. While I enjoy draft Hoegaarden as much as the next drinker, I am partial towards Stella. 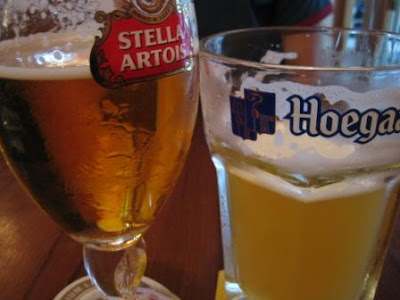 Mmmmm.... Sunday afternoon beer buzzes... the pints were drained before one could say "beer belly". We probably went a bit overboard that afternoon. Pints at Brussels, while tasty and worthwhile enough, are hardly in the same $$ bracket as Online pub, and we were abit taken aback by our own indulgence, when the bill was presented to us 3 hours later :-S 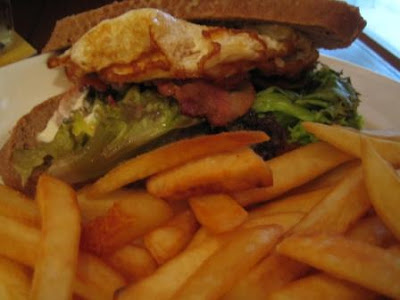 Drinking on an empty stomach is a no-no, as anyone with half an appreciation of the wonders of inebriation, would tell you. We were delighted to find that Brussels serves pork but the kitchen was closed, it being the after lunch lull when we were there, but they rustled up a bacon and egg sandwich for us to share. It was a modest affair, garnished with very wilted lettuce but redeemed itself with fat, fat fries, which were polished off as quickly as our early pints!

There's great joy in discovering nooks and corners for a cold one, or several. Where's your favourite pub?
Posted by minchow at 10:43 AM

I can't drink beer or wine cuz of allergy. :(

Oh gosh, I lurve those old skool pubs, where people go there for serious business of drinking after work@ a good price. (how much was a pint anyway?). No dainty cocktails, or hint of glossy lips on sight. :- D
I like Finnegans for the woody, pub-by feel, but don't like the price tag!

ooo.. nice one! we wrote up online pub as well, a while back. the wild boar curry is not bad at all:) erm, let's see.. my fav pub would have to be.. Deutsches Bierhaus German Pub:)

Little Inbox, that's not a totally bad thing! At least your liver will be healthier than the people who drink! :-)

Duckie, hehe, they say that's a sign of regular blood circulation. I don't colour much when I drink.. hmmm what does that say about my health??

Ciki, ooh I have to try the wild boar curry! It was such a surprise to see that poking up on the totally unassuming menu!

NKOTB, Penang posts only when I get to go back and unfortunately it's been so super busy that I've had to put off trips back till Dec! So in the meantime, I'm eating my way around KL :-P

someday good pint of guinness serve well, someday other type of white beer or weissen bier do justice, is not where to drink, who u drink with....cheers!!!

ohhh yes..happy hour does us good once in awhile..it is meant to make us happy!

yes, agree that brussels can burn a big hole..30rm a pint isnt?

Heard so much about d lardy goodness at Online. Hope to taste it soon.

Pity about the greens, but what one really craves to go with the beer are the fat, fat fries, no? ;)

Kennhyn, you are absolutely right! Company is what matters most. Cheers!

Life for Beginners, yup! Token colouring, those greens, is all!