Turned away by Imperial Garden Restaurant's opening hours on a Saturday (we wanted dim sum at 10AM, they were only open at 11.30AM), we drove sulkily around the area for a dim sum joint with the unspoken caveat that it not be a Jin Xuan or a Hong Kee.

Upon reaching the gleaming anterior of SS Two Mall, we spied Dynasty Dragon and swung right in. Open at 10.30AM, with a healthy queue of families lounging about the entrance waiting to be ushered in, we brimmed with profuse confidence and self-praise for having found the place.

Early birds didn't quite get the proverbial worm here though. The orders took forever as most of the staff were actually tucking into early lunch in the main dining area. Big ups to the employer for feeding the staff properly before they tackled the lunch hordes but perhaps, they shouldn't have let the early patrons in until they were absolutely ready. 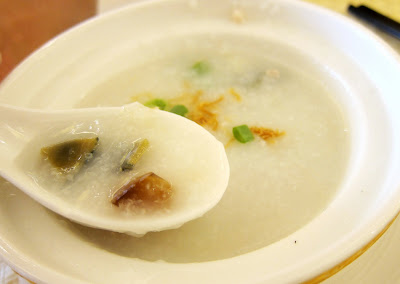 When the first of our orders finally arrived, we were off to a watery start when the century egg porridge arrived, bland, more gruel than porridge. 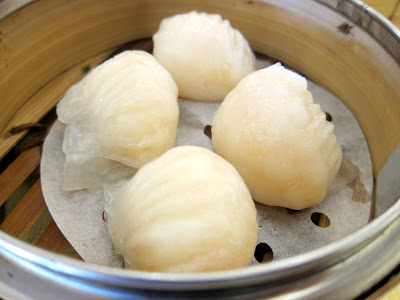 The Prawn Dumplings (Har Gau) did much better and reassured us that we would be taken care of, one way or another. 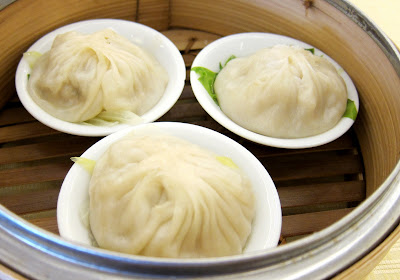 We liked that the Shanghai Dumplings (Siu Long Bao) came in little individual saucers to catch the precious scalding hot soup spilling out upon chopstick contact. 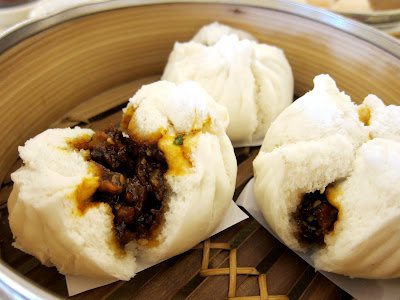 BBQ Pork Buns went down a treat. I'm no connoisseur but anything steaming hot and fluffy with lots of pork within is a no-brainer really. 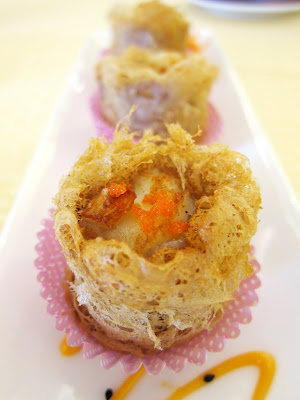 Now THIS, Deep fried Yam puff with Scallop, variation of the classic Wu Kok, was something else. These were quite the exquisite parcels of seasoned yam with a whole fresh scallop encased, deep fried to a golden crisp and finished with a sprinkle of roe. Luscious! 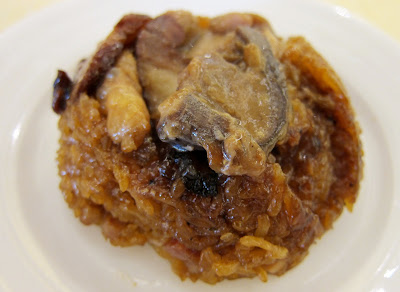 Ended with a miss though... the Loh Mai Kai was way too sweet and oily to recommend.

So despite a rough start, I guess we didn't do too badly, although we could have done without the initial wait. Fairly priced at around RM46 too.

Or their full deets, together with the five other branches' here.
Posted by minchow at 9:00 AM

10am on a weekend was made for snoozing under the covers, not munching on dim sum (no matter how deliciously tempting that scallop yam puff combo looks)! if i were absolute ruler/dictator of the world, restaurants would only serve dim sum from 6pm to midnight, instead of the typical 8am-2pm policy! :P

Sean, you're absolutely right. The truth is, this nasty habit of mine being out of bed before 10AM on weekends is because I am kiasu and want to be first in line at these morning dim sum places! Some things need to change around here!!

A decent wu kok's my fave dim sum... but I have to admit, I've never tried such a decadent variation before.

There are late night dimsum places along Jalan Ipoh that are traditional, fuss-free and quite ok. :)

Hi minchow,
Kindly be informed that this post has been reprinted on JoinMe.com.my, thanks. ^^
P/S: We have put your name and link credit back to this article.

yikes!
I'm fussy abt my dim sum..guess I wont be hopping in here anytme soon!

oh, too bad about the LMF.. it's hard to get a decent one! Even the one we just had at Foh San Ipoh was good but not mindblowing or anything:( So looks like SS2 mall is not the place for dimsum at the mo eh..

Rebecca, actually hit and miss... but if you're absolutely fussy, better stay clear of this! :-P

Ciki, best loh mai kai to date is surprisingly, this old school place on Jalan Ipoh. I still haven't found a close contender from the Orientals and the Tai Thongs of the world!

The text is promising, will place the site to my favorites! or subscribed to RSS...
Strange but true - U resource is expensive.

I almost accidentally visited to this site, but stayed here for a long time.
Man I love this comment and it was so fabulous and I am gonna bookmark it.

Seems so delicious.I want to try it!

Wow..Its looking so delicious..I want to try out the recipe of this..Thanks a lot for sharing..

You had interesting weekend and the menu seems to have been delicious, too!Unfortunately, my weekend consisted of lying in bed with temperature and chicken soup:(

Definitely must give it a try with family on this Sunday!

Heya, just want to inform you that I've migrated to http://alilfatmonkey.com. Please update your RSS and blogroll. Thanks very much!

Everything looks so delicious, I want to visit this place so much! I feel hungry already from watching those pictures!