Played house all weekend and was feeling the early symptoms of cabin fever, so off we went for a drive to shake it off.
Lazing around does take its toll - inertia begets inertia. We simply couldn't exert energy to go too far so Fat Tulip's idea of Hong Cha, near-and-dear pork noodles place in OUG, had to do.
For me, OUG's a tough one to get excited about, simply because of the questionable state of hygiene generally - there's so much good food within and if it was maybe half as filthy, we'd be eating there a lot more often.
Rats the size of cats aside, Hong Cha was the best pick that lazy evening - warmed us up plenty, paving the way for even more lying around and catching up on film downloads. 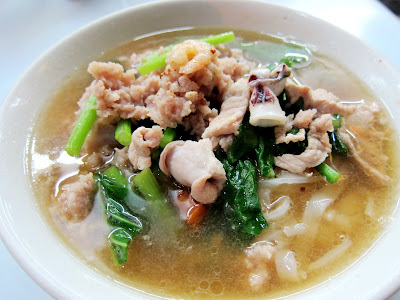 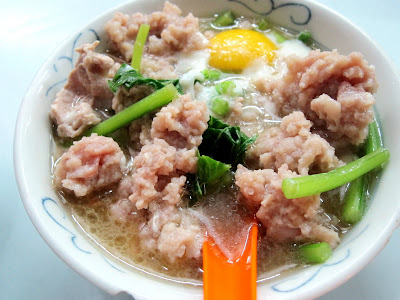 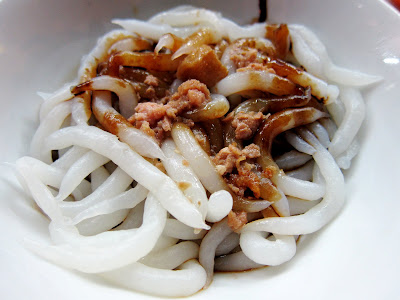 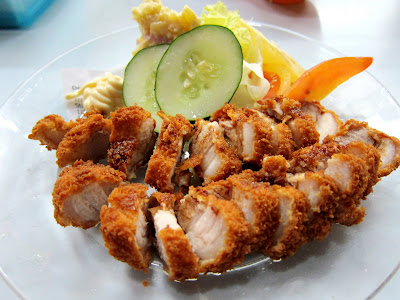 Tonkatsu, with a side of potato salad. Meat was a bit too tough to leave much of an impression. Had to leave this unfinished, even if that goes against every grain of my being. 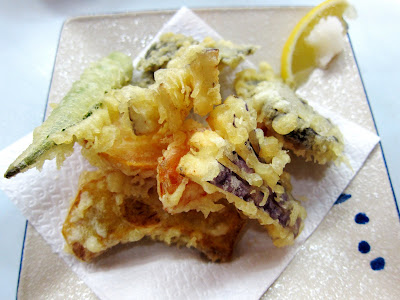 The mixed vegetable tempura set served its purpose. Ordinary enough to tough it out with the Japanese mom & pops' version around, crunchy enough to add another dimension to the already-hearty meal. 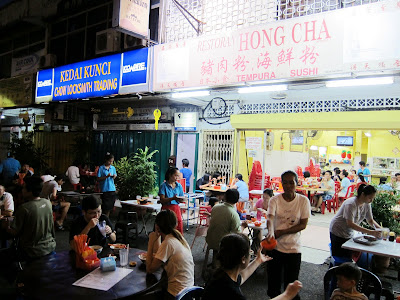 Hong Cha, evidently already well-known and well-loved
And best film of the weekend, by the way, had to be Mike Leigh's Another Year. Sad, funny, scary all at once. Deserves a bigger audience and all the accolades in the world. If you haven't seen it, make it a point to download it via your friendly torrent client!
Hong Cha
Jalan Hujan Rahmat 3
OUG, Kuala Lumpur
Posted by minchow at 7:00 PM

I'd probably go for the more modest version if only I tend to avoid the innards. :P

Let's just hope the rats the size of cats dun turn up when Devil and I drop by this place, haha.

I've been anxious to watch mike leigh's latest for months, but I don't download, so I have to rely on the pirates. Haven't seen a copy around yet. Wonder what's the hold-up. I've been reading over the past year about the haunting last shot =) I'm reaching that age when pre-middle-age angst sets in, and i wanna watch more movies about how real people deal with aging and the loss of youth... Need some tips! =)

Been ages since I ate this porky noodles. Reason for the Jap part of Hong Cha is the owner used to work in Chikuyotei, one of the first Jap restaurants in KL!

pork noodles look soooo good. I find it hard to resist a shiny egg that sits on top of greasy noodles! hehe. too bad about the tonkatsu.. 1st time I've heard a foodie not finish their food.. must have been really hard..

Used to be my favourite place for pork noodles. But ever since they change their line of cooks, the quality has deteriorate.

LFB, the rats are a special sideshow though, hahaha! You shouldn't miss it!

Sean, now that you mention it, yes that last shot was epic. I haven't come across a character so well-played in a while, one that made me want to slap and shake her, and cuddle her at the same time!

Boo, ooh that makes a helluva sense then! I thought it was just a confused concept just for the heck of it! :-D

Ciki, that was a tough decision to make! I deliberated getting them to ta-pau but felt that was inappropriate given the queues of people hovering over our table!

Chong, ooh if this is deteriorated quality, I can only imagine how good it was before! Obviously the crowds don't seem to mind!

Its looking so delicious..I would like to know recipe here..Please keep posting..

it's been ages since i had a good bowl of nice,yummy porky noodle...*thumbs uo ^^