After years (yes, years!) of anticipation, the move into new home is finally done! But if I had envisioned for one second that the move meant the end of the chapter where I'm planning, deliberating, calculating and fighting pretty much every spare minute from work, I got set straight pretty much as soon as we moved everything in and started unpacking.

OK, so the work is never really going to be done, as are the squabbles over the most trivial things (like the function-assignment of different types of kitchen towels) and quick-and-nasty meals from the neighbourhood dai chow. Upon prompting from recent blog post at Eat Drink KL, we made it a point to drag ourselves away from home one evening to do what we did best, better than home improvement, at least - beer and pork!

Chip 'N' Dale is one of the new joints that's cropped up along Lorong Rahim Kajai 14, infamous suburban stomping ground for the thirsty. 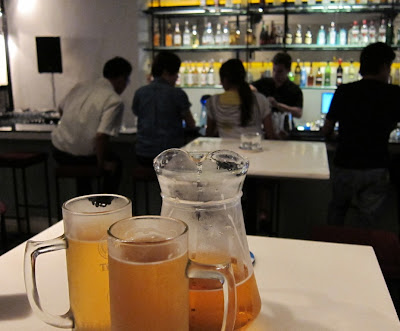 Good ol' Tiger hits the spot, at RM35 per jug all night long. I (almost) forgive him for putting a hole in our newly-painted wall accidentally. There's Kilkenny and Guinness on tap too at decent guzzle-friendly prices. If beer's not your poison, there are plenty of other options from a clearly well-stocked bar. 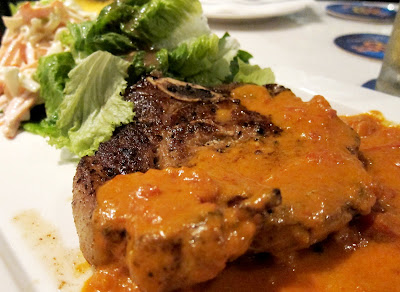 Took cue from Sean's post and thought why not the Drunken Pork Chop? The sauce was definitely saved the dish from being too commonplace a pork offering - they certainly weren't sparing in the use of alcohol here! 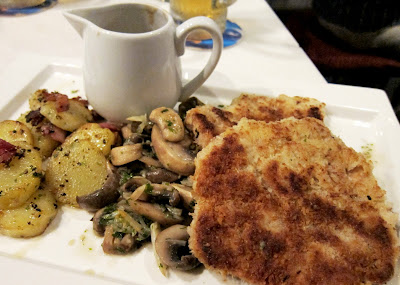 We both liked the Pork Escalope better though, which while crumbed and pan-fried, still came light and moist on its own. Barely minded the meagre serving of the mushroom sauce accompaniment. If only we agreed about things at home as easily as we did with this dish.

The food took about 40 minutes to come, even though there were barely two or three tables occupied. Must be pretty laid-back in the kitchen, would need to step on the pedal more if they were serious about the dining crowd. 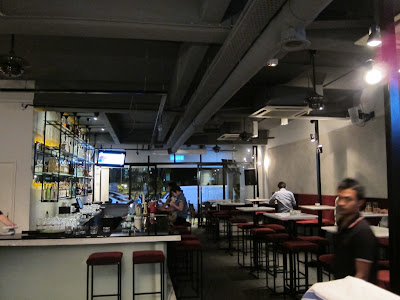 Not sure about how the look the place is trying for but I'm not crazy about it - for one dining on those rickety bar tables just isn't ideal, and the seats lining against the wall are way too narrow to be comfortable.

Would come back for the food menu and the drink prices the next time we need a break from home improvement. Hopefully they'll have more decent, derrière-forgiving seats then!
Chip 'N' Dale
Lorong Rahim Kajai 14 (towards the end of the row away from the junction)
TTDI
Posted by minchow at 9:28 AM

I certainly could do with a drunken pork chop myself... currently one or a dozen stages behind you in the new home business... So much to do! :P

But aye, can't wait to greet you as a neighbour, my friend. Let's get drunk over pork chops or whatever we might get in one of our neighbourhood dai chows! :P

Congratulations to you on your new home. :)

oooh, i agree, those tiny tables need to go! we were terrified throughout our entire meal that one clumsy, inadvertent kick would send all our plates and cocktail glasses tumbling to the floor :D
here's wishing you at least several years of happiness at your new home (tiffs over the choice of curtain colors notwithstanding!) :D

Hmmm...I was wondering what the name of the place was when I drove past a couple of weeks ago ;) Will pop by your humble abode really soon :P

Noooo!! Damn you Blogger! I want my comments back!!

Ciki, oh hey, just noticed the comments are back! YAYYYY!! You must have brought them back! <3!!

All Mei cares about are the hot men ... what about the panas monkeys :-)

The owner closed down the place suddenly and ran away with suppliers' money, I am one of the supplier.

Stupid bitch, I hope someone can post her number here.

u should post her face,id or contact number n shame her online if she doesn't respond to your dues otherwise ppl like her will always take advantage of others :(

She listed herself as owner/operator of another business called Osso Bone Care but that has been removed just as Chip n Dale's facebook page has disappeared, don't think she want to be found!!

hi i am janice, this is NOT a runaway case, my phone number has been cut off. here is my new number which I have just gotten 0189832099.
Runaway with supplier's money? I do not have any of your money.
I do not work in osso anymore and Chip N dale facebook page is no longer on facebook because the restaurant is bankrupt and closed, it does not exist anymore.