Take on Time, the Tramp, at Cilantro KL

How do we upend this losing battle to time? At some point, we're risking expiry, aren't we, being harangued by our constant defeat, running out of time, not knowing what to do with what little time we have left to ourselves even when we do find it? 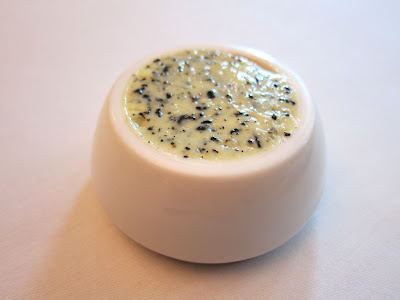 Too simplistic to point to work being the culprit of this perpetual massacre, burying ourselves under the days and hours lost to the demands of dry rosters of duties and this and that? Hmm, a lot of problems could probably be solved by the materialisation of this. 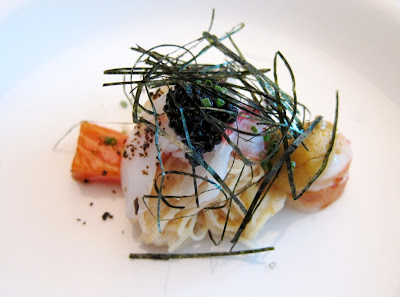 Cold Capellini with Panaché of Seafood and Mentaiko

I said probably. Imagine, once we start having more time off work, the value of personal time would become even more brutally apparent, lead to the question of why the hell do we even work anyway, and the same franchise of angst and resentment would persist in a downward spiral, probably at greater speed!
So here's this thing I tried recently, to some pretty amazing results - the ultimate victory isn't in being able to wrangle as much off the to-do list in a short space of time, but in the exact opposite. Pick just one day, anyday, to stop and sink for an inordinate amount of time and drop, just drop whatever you're doing, drop your shoulders, drop your calls, drop the time-keeping and drop, while the rest of the world is grunting and heaving.
It is a painfully rare occasion when I dare pull away from the masters, to slip in with some disarming company over lunch, at Cilantro, no less. The ceremonious beginnings of truffle butter on warm fresh bread and dainty cold pasta starter assure me that I'm in very good hands. 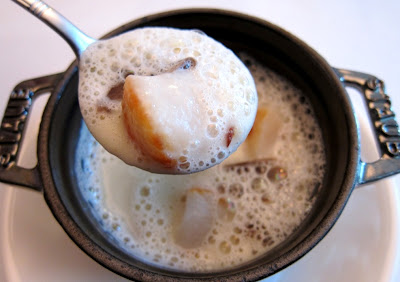 The second course mirrors the conversation at the table as we tuck into Cilantro's resplendent brand of escapism, frothing in bite and mellifluous anecdotes. 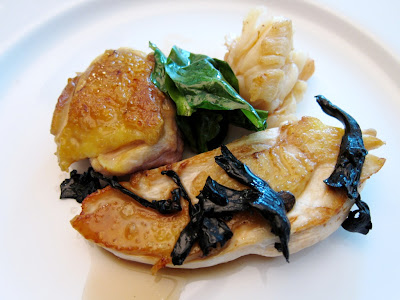 Chicken makes a rare appearance on Cilantro's lunch menu, and it tones down the heart-stopping violation of the schoolday Subway-and-chap-fan palate. A shade more pedestrian but at this point, the fun's shifted from the food to stories shared around the table. 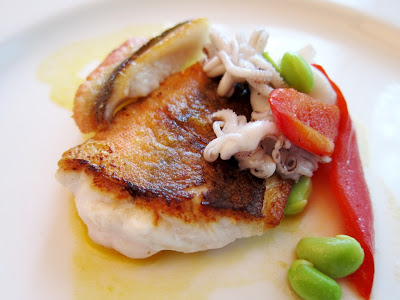 The others found the fish main underwhelming and muted, compared to the glorious starters. 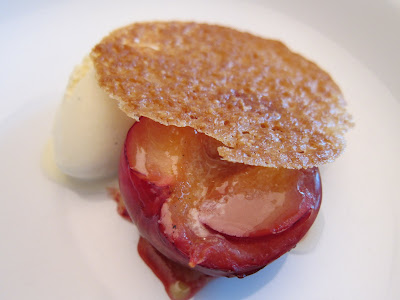 Sweet and tart ending, which while simple to the point of rustic, somehow spurred lunch on until around 3.15PM, when the staff had to apologetically shoo us out back to the hours.

And whaddya know? The world didn't end because of one decadent lunch, work still got done that evening, and yes, the internal time-keeper in me sulked for a bit for being ignored for those few hours, but the tramp eventually got over it. So the next chance you get, consider flipping time the bird and hit Cilantro's Friday lunch, which springs new surprises every week.

aiks, it's now 3.30pm as i read this, and i've missed yet another one of cilantro's friday lunches. the internal time-keeper in me might be triumphant, but the hedonist within is wailing bitterly. a tragedy of almost shakespearean proportions...

Really hope we can do this again soon. :) Had such a lovely time...
(So rare for me to have long, lovely, decadent and fun lunches like that)

Sean, yeah I gotta work on my timing a little better to keep the internal tragedies at bay! This time concept keeps haunting everything I do, grrrr!

Pureglutton, lovely in its most epic interpretation! And the angkoo goody bag at the end, the icing on the cake! :-D

J, yes, please count me in! In hindsight, I realise a single lunch session is twice the therapy of loutish drinking sessions after work! :-P

LFB, baby steps, baby steps! I am hearing whispers in my company the possibility of moving to a 4-day week, albeit with an adjustment to $$, boohoo!

Count me in for the next lunch session! Damn if only lunch hour's two hours everyday!

Like yourself, I being the corporate slave myself, look forward to when the cat is away...so this little mouse can come out and play. Hehehe...Good to reward oneself with a sumptuous and decadent lunch every now and then :)

An adjustment to salary in exchange for less days at work? Boo!! :(

But enough of that. It's the new year, after all. We shall only think of nice things. Have a Happy, Hoppity New Year, my dear. May more good tidings and blessings come your way this wabbity year! :D

yesh ma'am! I will definitely consider this place.. if I have time. Err, even if I don't have time.. hehe

J2Kfm, OK, on! I see you've joined the mob scene in KL! The more, the merrier!

Julian Si, thanks!! Gong Xi Fa Cai and hope the rabbit's just as robust over in your neck of the woods!

Unkaleong, this mouse needs to play a LOT more often! Hope you got your fill over the hols!

LFB, thanks Kenny! I do love your brand of optimism, tips me right back up every time I feel I'm about to fall into a ditch (like first Monday back to work after CNY!). Happy CNY!

Ciki, let's Cilantro again soon! We will simply have to make time! No other ways about it!

Hokkaido Scallop with Artichoke Soup and Truffles? looks so special i would like to try it

Oh yes, let's all lobby for a 4-day week! I think having Wednesday off would be ideal....although Friday off means being able to go to Cilantro for lunch....