No one ever gets away operating within a single persona no more.
Not even a neighbourhood dimsum joint. 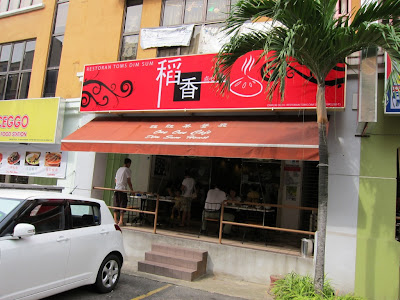 One One Cafe to some and Toms Dim Sum to others. We are all fragments of different things to different people, like it or not. The friend, the sister, the colleague, the lover, the neighbour, the audience - navigating around the varying expectations can be unnerving and cause more than a few slips and mishaps. 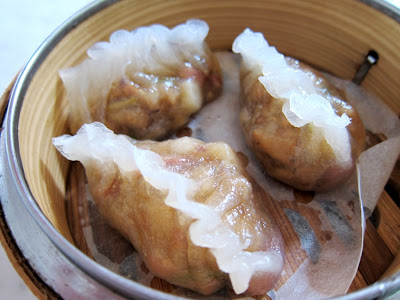 Your roots may start out in the Guangdong province, where the Teochew dumpling originated... 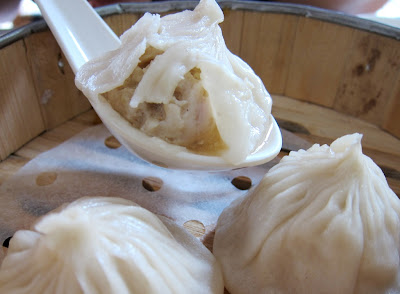 ...traversing to the east where Shanghai gave birth to the soupy pockets of Xiu Long Bao... 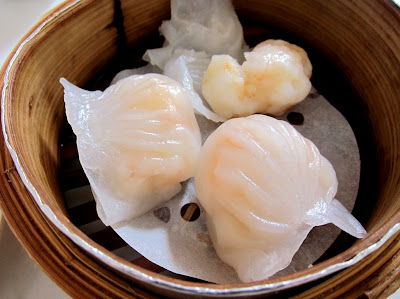 ...diving then into the ocean for the har in the har gau... 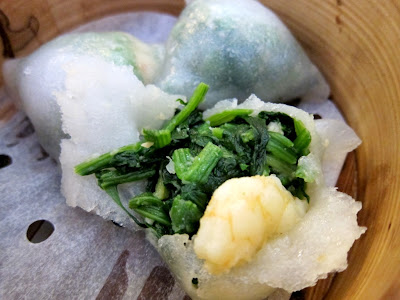 ... and in subsequent remakes, getting itself upholstered in different variations, such as One One's Spinach & Prawn dumpling... 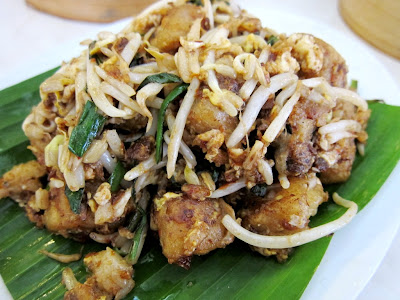 ...and settling into universally embraced grease traps in the pan-fried goodness of the Fried Carrot Cake... 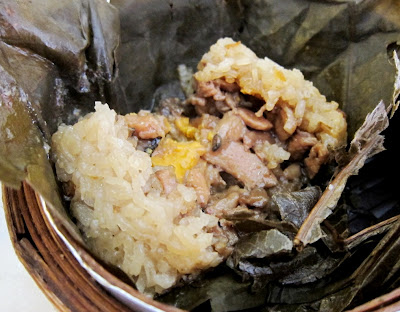 ... and getting itself wrapped up in lotus leaf for a meat-and-carbo packed agenda.

Home too gets redefined as humankind continues to cross borders and barriers to get somewhere, anywhere, who knows where. 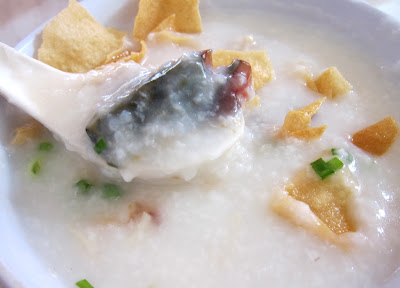 But right now, what is working for me is the porridge here at this dimsum joint, undecided of its own identity. The century egg & pork porridge features chunks of egg and lumpy pork meatballs in stodgy goodness. 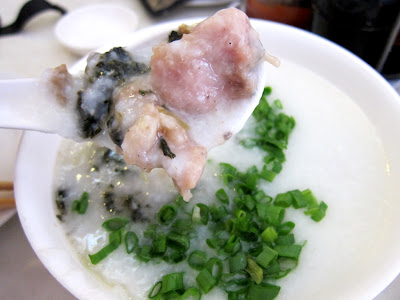 Another version starring spare ribs & preserved vegetables brings a sigh of temporary relief from having to be different persuasions to different people.

Lucky me, it seems, that current reprieve is so close and accessible.
One One Dimsum/ Toms Dimsum
Taman Danau Desa 2
58100 Kuala Lumpur
Posted by minchow at 8:00 AM

I have Meredith brooks singing in my head now! I'm a bitch, I'm a lover, I'm a child, I'm a mother, I'm a sinner, I'm a saint :D But yeah, whenever someone claims he's 'simple' and 'down to earth,' I can never believe him, since there are always more facets to all of us than a personals ad can describe...

Hmm, worth a visit, you think? Devil and I have passed this place many a time yet have not been tempted to enter thus far... :P

hey this looks familiar! the dim sum is pretty alright but parking is hell here!!

My son was telling me about this place just yesterday. Got to go check it out.

i get that too, when i visit foodcourts. i don't look into the details too much these days but just enjoy the diversity that is the nasi lemak, char kway teow and..roti canai? and of course, the steaming hot baskets of dim sum. the porridge looks good. i almost thought it was deserved with preserved vegetable AND dace!

Sean, speaking of personal ads, I am pretty sure the new breed won't stomach all that "simple" and "down to earth" nonsense anymore! Surely people no longer respond to such diluted nonsense!

LFB, for the porridge alone, yes! I usually avoid dimsum joints with this middle-of-the-road concept, but this one was decent. Service can be horrendous when crowded though :-S

Joe, hellish parking, yup, that's the one! I live within walking distance for now actually. Should try a stroll over one of these fine mornings! :-P

Quay Po Cooks, if you can manage, try it on weekday mornings. It fills up very quickly on weekends and they are almost always under-staffed.

Hairy Berry, ooh some dace would actually be pretty awesome in the porridge! I'll BYO next time!

delicious foods.. like to try Xiu Long Bao and the dumplings looks good.. and the porridge, all of it... makes me starve..

Lucky to get a parking spot right in front of the shop.

Surprise to find they serve "Oh Nee" (Yam paste dessert). Yummy, love it, not many places serve it. Managed to convert hubby to yam lover. Generous portion of porridge...