An Unfinished Ritual, Mai Ramen at Jaya One

To me, rituals often present themselves as a bunch of obligatory chores which have been put to reinforce some expired logic from the past.
Recently, however, I joined a choir singing a different tune. Having concluded that we were constipated by a whole host of soul-sapping habits, a few friends and I decided to create a new ritual of purging. The idea was we would make handwritten personal lists of the nasty forces we'd foolishly allowed to infiltrate our little lives, recite them to one another as some sort of a poetic and serious pledge and then conclude by burning lists in a bonfire (or well, in the interest of containing the threat of open burning, a scaled down version in a Milo tin).
So this one afternoon, huddled over bottles of prosecco, we scrutinised and dissected our lists in great detail. Before long, our wills to rid ourselves of these ill compulsions and elements were fortified by ridiculously optimistic cheer and approval. The bubbles helped too, of course.
Alas, before the fiery finale, we decided to make a quick dinner pit stop, which led to unfortunate truncated proceedings. 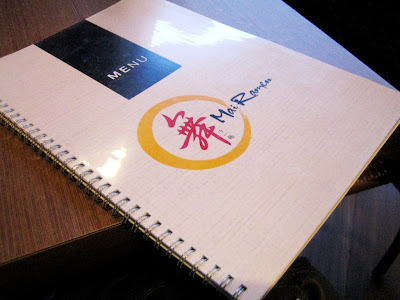 Mai Ramen, brand new at Jaya One replacing Simply Fusion, called out to us as we stumbled a little, trying to find our footing at dusk after all that unfeigned motivation. I had been hankering for a robust bowl of ramen for weeks now and with all that alcohol swirling around in us, we were hardly in the state of mind to trouble ourselves with options. Makes sense that a recurring item on our lists of things to eradicate is the abuse of alcohol to solve all of life's most trivial problems. 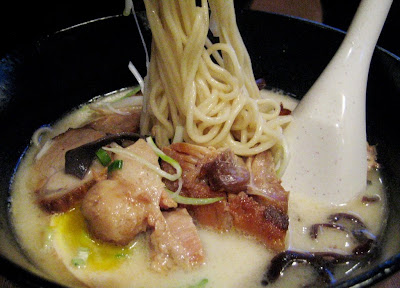 I immediately called loudly the Buta Kakuni (Braised pork belly) Ramen. Ever since my sister Mag inducted me to the lavish flavour of this dish which takes days to prepare, I have not been able to look at another pork dish the same again.

All ramen dishes share the same tonkotsu broth, thick, milky white, not as common as the clear shoyu ones available in other local ramen joints. I had expected the soup to be heady and overly salty, similar to the leanings of Tokyo ramen bars but was pleasantly surprised to find it a milder version. 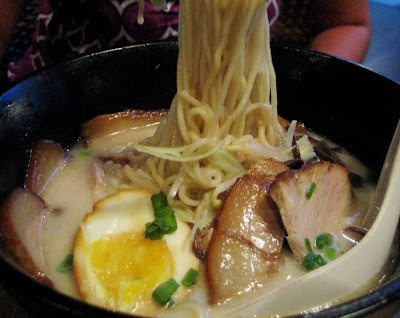 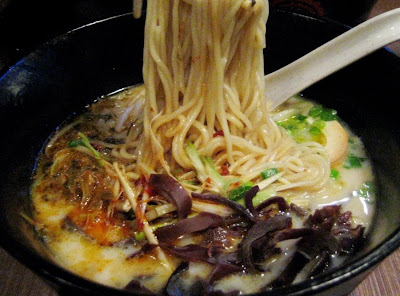 The Tamanegi no Takana Ramen with spicy vegetables - not entirely vegetarian given the broth but my selective vegetarian friend enjoyed it to the last slurp.
The ramen used here isn't the standard, slightly curly yellow noodles but a thinner, straighter version in pale off-white. I still prefer the thicker bite of the former but this still makes a pretty luscious bowl of noodles. 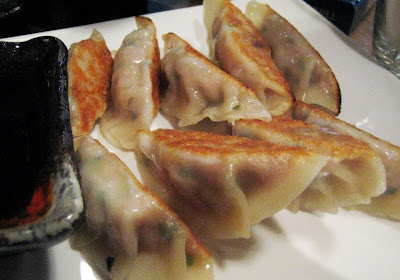 Mai Ramen's main courses come with the set option which includes 3 pieces of Gyoza, a side salad and tea. We enjoyed the Gyoza thoroughly - medium thickness of the skin, right dollop of meat & chive stuffing dipped in vinegar dressing. 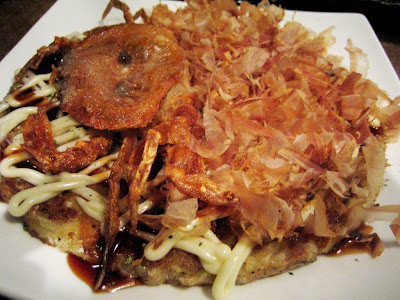 The let-down of the meal would be the Soft Shell Crab Okonomiyaki, which was a soft, doughy, nondescript mess. I've long established that I am no fan of okonomiyaki so an inferior execution would do it even less justice, even when it comes topped with a whole soft shell crab.
Perhaps the highly gratifying meal interjected my ritual logic for when it came for time for us to resume the final step, I declined. I reasoned that I needed to keep my handwritten list to remind myself what I was letting go, although in hindsight, I was simply too drunk and too tired to bother with the Milo tin inferno.
But no matter, the unfinished ritual was truly liberating and the source of interruption, deliciously comforting. Meal was very reasonably priced too, about RM90.
Mai Ramen
Block C, Ground Floor
Jaya One
Posted by minchow at 2:40 PM

Am I the only hapless, hopeless soul who still can never remember the difference between ramen, soba and somen? When I google up their images, they look fairly different from each other, but when they're in bowls in front of me, they all look the same!
Lemme know if u ever plan to burn that list! I might join u, since I have my own personal catalogue of crimes that needs vanquishing! For good measure, we should throw the Milo tin into the sea after that as well!

Hah! Merciless. You hid this little treasure to yourself and left us to wallow in some insipid, mayo inspired Japanese joint. Bah! :D

Not entirely convinced that replacing alcohol with porky ramen would be that good an idea. Let me know what the outcome of this little experiment is. Cheers! And a great week ahead.

ramen after alcohol, sounds good to me! esp with that fatty pork.

Oh whee! Someone blogged abt tis joint! ;p
Cos I thot it ws a bit pricy & couldnt get anyone to go to try w me!
Well, if u passed it, then perhaps I shall venture there!

Mmmm...Buta Kakuni Ramen. Can't remember the last time I had a good bowl of one. Definitely on my to eat list...

I'm totally addicted to the wholesome, hearty tonkotsu broth after my visit to Tokyo this year... Yay for another ramen place for me to haunt, er, patronise... :P

I found the ramen soup base is too salty for me most of the time, but I like the noodle very much.

so jelez! when u taking me?!! u had me at pork pork pork:P

Sean, it doesn't matter when you don't have a strict preference since they all taste awesome! Come, let us go down a bowl or two of whichever, then burn away our vices and right all our wrongs!

PA, nay, I will not stand for such baseless accusation!! The discovery of this came one week after that blasted Jap outing - how I wish it was sooner, we could have saved ourselves a whole lot of mayo-doused despair!

Joe, oh it was good! The heartburn in the middle of the night that followed...not so :-S

Pure Glutton, yes I'm anticipating a return visit sober. Who knows, it may change my view of this place completely!

TNG, do check it and let me know how you take to it. I suspect my opinions are highly clouded by alcohol so I don't trust myself 100% :-P

J, yes the list remains unburned as of now. Which kinda led into all the more pressing angst the last couple of days. I must finish this ritual and burn the damn list tonight, if I'm to have a fighting chance of regaining hope and faith!

LFB, we at least have this to tide us over until Tokyo. Not sure how much longer I can hold out before I book that damn ticket though!

Little Inbox, I agree... I don't know why they drown the soup with so much sodium! Mai Ramen's seemed to have struck a nice neutral balance though.

Ciki, just say when, m'am!! How can pork, ramen and your lovely company ever go wrong? :-D

I need to open my eyes and look out for these makan places in Jaya One. I never notice things! >.<

Yay! Non halal ramen! If I don't go there in the next week, I am a failure.