Osaka-fu Okonomiyaki: Why Don't You Love Me?

Osaka and Okonomiyaki are synonymous so as soon as we arrived, checked into the hotel and got ourselves orientated around Dotonburi, we hunted down the pancake. It required practically no effort as the main street and alleys running off it are teemed with outlets offering this sizzling treat.
It must be said though, that both of us, for some strange reason, didn't dig the idea of Okonomiyaki from our previous encounters. Neither of us can coherently explain why. Flour, eggs, shredded cabbage, meat and grease are all exceptional ingredients in our books, so mashing them all up together would be a shoo-in. Too much of a good thing, perhaps? 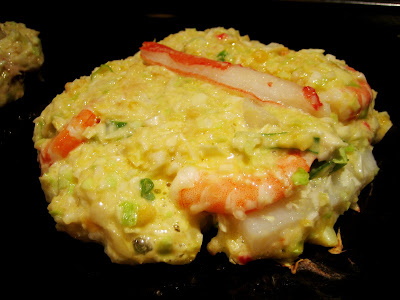 We ordered two versions - one featuring crabmeat & prawns and the other one tuna (my bad, I mistook the tuna in the picture for some exotic vegetable). The waitress turned up with the bowls of the ingredients, mixed them up good and slapped it on the grill built into the table. 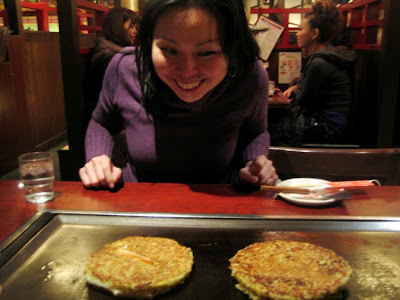 The wait for the mixture to cook can be a tad agonizing, especially since we were both crazy starving. 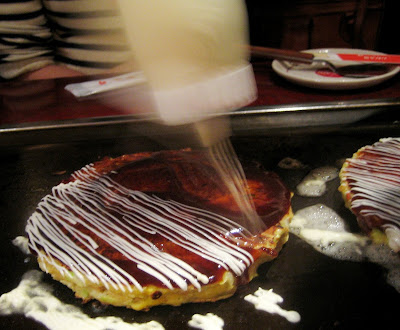 Waitress came back about 10 minutes later, armed with more ammo. Kewpie mayo sputtering on the grill can only mean one thing = DANGER! 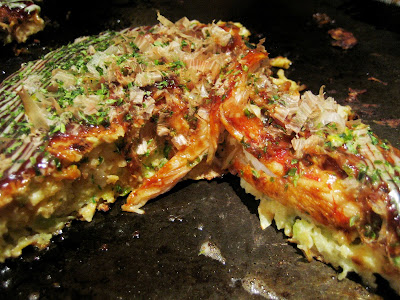 Once done, we helped ourselves to as much bonito flakes and ao-nori seaweed powder as we could handle. The result was a pretty formidable package. 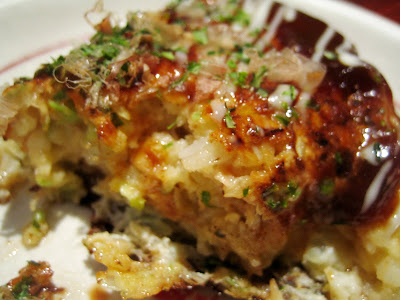 Utter CHAOS! We were stuffed beyond repair by the time we were through. It was a pretty breathtaking meal, especially for new arrivals to Osaka but our reservations of Okonomiyaki remained. Too much love WILL kill you! 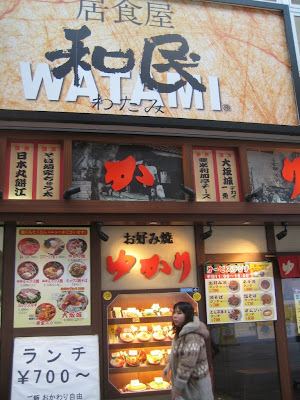 Can somebody explain why oil mixed with carbs tastes so good? You looked absolutely famished in the photo! Never tried that Japanese Pancake before but sure looks good.

I could never finish an entire "japanese pizza" by myself. It's yummy but then jelak after eating half of it. I'd then proceed to scrape off the bonito flakes and sauce from the top with a chopstick and lick it clean. :)

okonomiyama ... quite a mouthful. it's tough to remember any word with more than five syllables!
too much love will kill you, if you can't make up your mind ... i think i was in form six when i last heard those lines, but that song is now echoing in my head, alongside memories of classroom romance and heartbreak...

Just by reading your description and looking at those photos, I think I'm gonna like the Jap pancakes :)

Yummy! Alas, the only place I know off that serves it in the Klang Valley has closed down!

wow this is awesome, so fresh and must be full of aroma! I like the way they fried it, the fillings must be awesome! :)

I first tried Okonomiyaki when I went to Tokyo a few years ago. Unlike you, I don't get the jelak feeling, but then again, I've probably got a bigger stomach compared to you. hahahaha.

Oooh, that look of your anticipation in your second pic alone says EVERYTHING. I can't wait for my visit to Japan too!

wallau! damn shiok! I also had mine on the way south to fukuoka - the Okonomiyaki is great huh? japanese pizza pancake .. kampai!!

Wow. Since 1953?? That's quite a long legacy of okonomiyaki!

ohh... hold the mayo fr me pls!
Why is it all Jap snacks r loaded w 'em mayo?
Or all those fusion Jap stuffs (like the ones I had in Dankanyama (at changkat) r all squirted w mayo?

But having said tht, I must admit Jap mayo did taste different (or it could be tht they used mayo n mix it w some otr ingredients)

PerutBesi dropping by :) It's almost lunch hour & looking at the food photos on your blog makes me drool & hunger for some good food! :D

nothing like these kinda carbs when i take jap food..beats all the noodles and rice anytime!

PA, I was absolutely starvinggg!! And the darn pancake took forever to cook!

Qwazymonkey, ahhh going straight for the icing on the cake! I like the way you think! :-P

Sean, oh dear, did not mean to haul up the cheesiest memories from the archives! But while we're on that note, let's turn the volume up a notch...

Allie, actually any decent Jap joint could make this... it's simple enough! In fact, we should all give it a go in our humble M'sian kitchens!

Unkaleong, I keep hearing of this Low Yat Plaza joint which serves up a decent version. Hmmm... time to pay a visit and pick up a gadget or two?

BBO, it WAS great for the first two or three mouthfuls. To be honest, kinda just got too much from there. Just super packed with so much you can't tell what from which!

LL, I think it's safe to say your tastebuds are that much more cultured than mine that you couldn't possibly resist what's theoretically and obviously good!!

LFB, what, Japan?? After HK/Macau? You're travelling AGAIN?? *greens*

Ciki, it's really a superb creation but one whole pizza all to yourself is just inconceivable to me! So much... substance!! :-P

Mimid3vils, again with the Low Yat Plaza! I've been hearing about this non-stop! Looks like I can't stay away too long!

TNG, I feel the same! I think contemporary Jap cuisine relies heavily on mayo (albeit the Jap/Kewpie sort) to play up the flavours, which kinda kills it for me. The way they use (and abuse it) almost suggests it's a national legacy to uphold!

PerutBesi, thanks so much for popping in! My incessant attachment for food blogs is a love-hate one too - a contrast of what I should be eating and what I can potentially eat!

okonomiyaki at shimsaibashi, osaka...ahhh, good old memories! the good news is that watami is now in singapore! hmmm, i wonder if it's the real thing.

you are right..too much love will kill you. take away the mayo and it'll be less cloying...hehe

sinful but i would lurve to take a bite of that!

Nic, ooo just wandered over to Watami Sg website and real thing or not, it looks pretty darn good! You gotta try it!