I had been plagued with a series of physicial ailments and dining out seemed like a distant concept. So when it came to catching up with Fat Tulip one night, I was happy to just jump in his car and go with whatever came up. 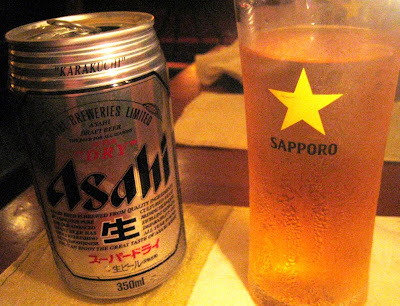 We arrived at Nonbei in Desa Sri Hartamas with little expectations, other than some mid-week recuperation in familar company. Like Asahi, poured into Sapporo glasses. This must surely be blasphemy in certain quarters but we didn't complain. 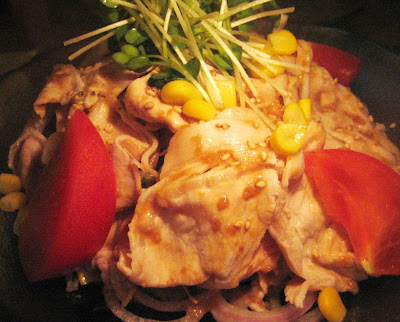 The staff were very helpful in offering recommendations from the izakaya-like menu but we insisted on groping along. But we did succumb to the suggestion of the Buta shabu salad (Boiled pork slices with salad) to our favour. It arrived a hearty serving of greens and slices of marginally fatty pork, in wafu dressing. I was happy enough with this. We had also ordered the potato salad but it was so unremarkable and forgotten before the first beer was downed. 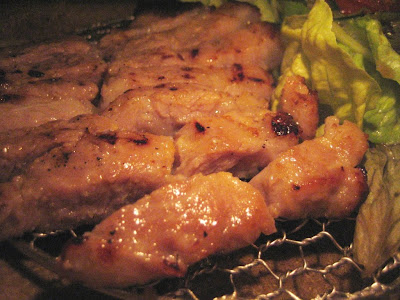 Then came the question about pork - there was the deep fried black pork, the braised pork and the grilled pork and each one of those spoke to us in volumes. Alas, there were only two of us, both highly prone to widening girths. We settled for Buta Miso Tsuke Yaki (Grilled pork with miso), which proved to be a sound choice. Very tender slices of fatty pork, thoroughly seeped in marinade and grilled slowly over a slow fire, sweet to the bite and absolutely lovely with beer. 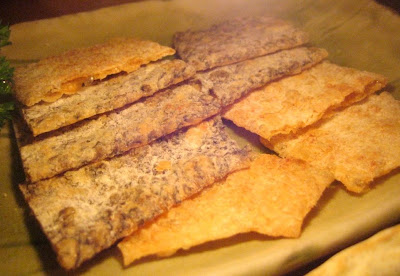 He insisted on Salmon kawa (Salmon skin crispy crackers) only to be disappointed that they arrived not much more than flavoured rice crackers. 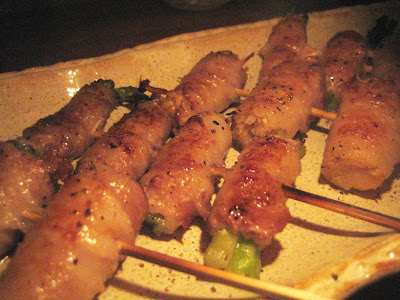 We sat and watched the very accommodating waitresses tend to a healthy traffic of middle-aged male Japanese patrons and wondered if we had somehow stumbled unwittingly into KL's version of a kyabakura. Eventually, as the evening wore on, we decided we were severely misplaced and paid the RM163 for the two of us, which covered the meal and a couple of rounds of beers. 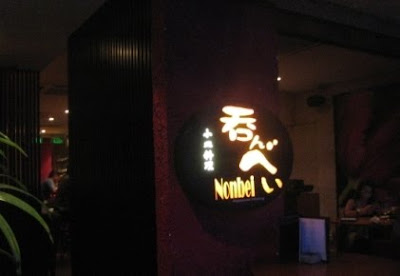 I love a japanese place with good pork dishes. My favourite is Izakaya Tamako in Plaza Damas. Cheap and good all the time.

nice small jap places are usually the best for some pork n beer..i agree with monkey..the izakaya serves some rather shiok katsudon

i like grilled asparagus.. yummmmy! rm10++ for all you can eat tomorrow? no joke?

Fatty pork with beer? Sounds super!!
But hor, the food is bit on the pricey side, no?

The Grilled pork with miso looks so tender and juicy ler.. I wanna bite one mouthful leh!

heee, does the price include asahi beer ah? if yes, definately up for it~...:)

i saw the asahi, and its remind me HongKong just only selling 1 litle at RM9...heeee

The grilled pork and asparagus is making me salivate and growling with hunger! *LOL*

It isn't easy nowSsdays to find Msian ladies who truly cooly enjoy kirin sapparo with the gusto and style you have here then share it with all in da open, what with the girth , cynical glances , bigoted gossips , caning and el etc. We say , well enjoyed and well done ! Things are running way overdue on our side but it shall come, Cheers !
..bl%ur*ppb#b
lol !

It is always safe to order the Enoki Bacon as the salty and smokey flavor of the bacon goes well with the mushroom. It is good in most places.

when i'm down with a cold or flu, it's kim chi time! tasty and nutricious, it doesnt get any better than that. hope you are doing ok now.

I hope you're feeling loads better, dear. Maybe I should take to pork too... a bit under the weather today. Perhaps need to babify my health, hehe.

Qwazymonkey, ahh yes that Plaza Damas joint got shoved to the back of my head! I knew I forgot something in the area!

Sean, horsemeat sashimi?! Must've been on the seasonal menu! Though the night we were there, nothing quite as intriguing as horsemeat on that menu though - not the season for horses?!

Joe, katsudon eh? OK, I really need to get my ass down to this place. The Nonbei evening, I was actually gunning for katsudon but not found on the menu.

Bangsar Babe, yeah, prices on the high side. Not exactly yr regular mom-and-pop joint this. Must be the premium one pays for the err.. conversation with the waitresses.

Allie, yeah, that grilled pork stole the show! From the waitress who changed into a sequinned gown, haha!

Taufulou, I think they said drinks are free flow up till 10PM. I had to miss it, but hopefully next anniversary!

Gill Gill, OUCH!! Painful reminder! Asahi flows practically like water elsewhere but Malaysia! We paid RM20 per can at Nonbei!

Iamthewitch, I hope you managed to get something equally satisfying in that growling stomach!

BSG, I enjoy my beers, whichever their origins, waaayyy too well! Burrppp!! :-D

the pork looks so juicy...and yakitoris seems decent too! hmm, never noticed this restaurant before, must check it out the next time i'm at hartamas..

The food looks very good were was this at? What city? I would like to eat at these places one day. Drink it down with some good beer as well.

http://bestcafeindulge.com/. Give a try for this new opening cafe at Kuchai Lama with top sell MILLE CREPE. They sincerly serving delicious food