After battling Friday evening traffic into the city, a usual 10-minute journey that took 45 minutes, I was grumpy and ravenous. My friend H who had made the proposition for dinner at Avenue K had promised good food at reasonable prices, and I was intending to hold her to her words.

We arrived at Shanghai 10 Grand at the basement of Avenue K, right above the hordes of LRT commuters. At this point, I remembered a pleasant dining experience at the Shanghai 10 outlet in Bangsar Baru more than a year ago, and a less pleasant one at the outlet in Queensbay Mall in Penang, so really, the evening could go either way.

H took to the task of ordering for all four of us with great ease, fuelling suspicion that she had been lunching extremely well at her new work surroundings. We were a little taken aback when all the food arrived at one go and we had to join our 4-seater table with another to make space for all the plates, teacups, condiments and whatnot. 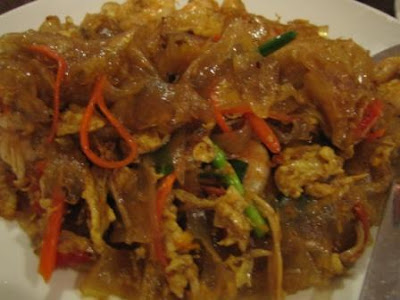 Fried flat glass noodles with crab roe and shrimps. I'm not a huge glass noodle fan, the stringy variety anyway, but this one transformed me into an instant convert. Tasted like hor fun, with rougher texture and more bite, and each piece see-through to boot! The crab roe and shrimps were abundant, though you wouldn't be able to tell from my awful photo. 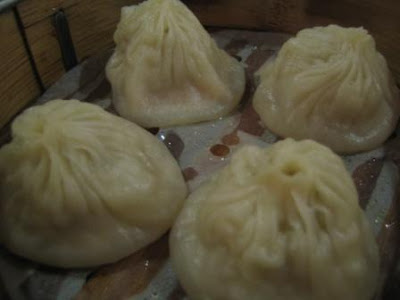 The outlet name has Shanghai in it after all so missing out on the Xiu Long Bao would have been a crime. The XLBs here are decent, with the right amount of filling nestled in a small mouthful of soup. It isn't quite Din Tai Feng's 18-fold offering, but it'll do. 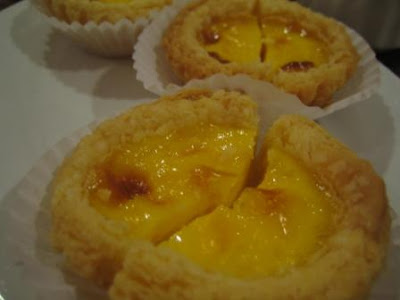 Egg tarts, extra milky. Because I'm quasi lactose-intolerant, one half of a tart was just about all I could stomach. 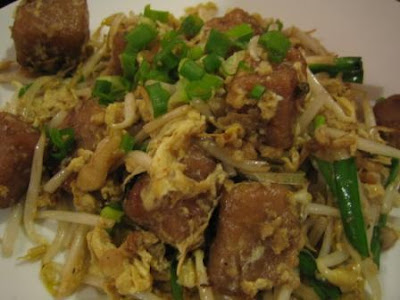 Fried yam cake, instead of the usual radish cake. I have to say I much prefer this to radish cake. There's just so much more substance to yam than radish. 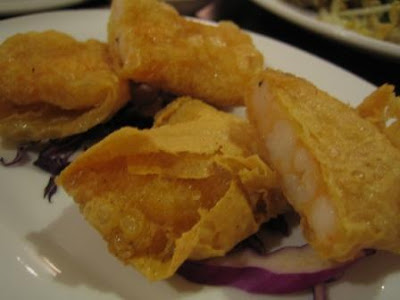 Crispy prawn rolls in beancurd skin. Nothing extraordinary but credit due for the chunky fresh prawns within. 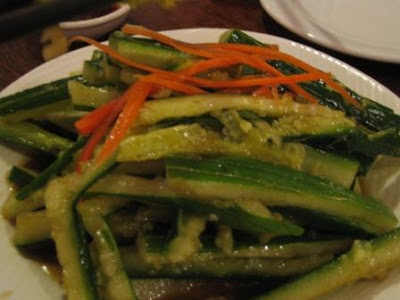 Pickled cucumber. Refreshing, tangy with a mild hint of spice and everything nice!

There was also an order of the ramen in Shanghai-style hot & spicy soup but I completely forgot to get a shot of it. The noodles were springy, and a nice soupy addition to the rest of the relatively dry meal.

We polished everything off, right down to the last sliver of cucumber. The bill split up evenly to about RM16 per person, which is reasonable enough so all the horrors upon exiting the Smart tunnel earlier were well forgotten!
Posted by minchow at 9:03 PM

Oooh! So no 747 then. :-D
Good review. Better than decent food, reasonable price.
I'll try it!

I like their hot and spicy ramen. Really springly. lol Yum! Yum!

Avenue K is the shopping complex oppo of KLCC?

never been there. this seems to be a goog try.

Fried yam cake, this is not new to me. I just cook this yesterday when my mom passed me some home-made steamed yam cake. Will post it soon. :)

looks damn shiok! don't blame ya... think id polish everything off too!

Mellie, you HAVE tried it! We went to the Bangsar Baru outlet together! Remember, after all that sangria?

Food Paradise, puts a spring in your step, definitely!

J2Kfm, yup the VERY deserted place opp KLCC. Don't know how businesses would survive there... although they're opening up this club called Quattro there.

Little Inbox, pass some to me next time, can??

Ciki, yeah! Thought it was too much when the food arrived, but obviously underestimated ourselves!

If you ever visit Penang, consider popping by Corner Club (Gurney Drive) in Penang for their Fried Yam Cake - its one of the best I've had so far :-)

dman long time nvr gone back actually..the food is alrite..the xlb packs quite abit of soup too! but got a slightly stronger pork taste

I've only been to the Bangsar outlet, and I found their XLB and fried carrot cake quite tasty. Too bad "tutup kedai" already. :S

Hmm... seemed like there are just too many new places popping up there. I wished I can visit them soon :P

Cariso, the outlet in Penang still open?? I'm shocked! It was pretty horrific when I visited a while back.

Kaya Meekoo, thanks for the tip! On the list it goes!

Joe, hmm didn't notice the stronger pork taste... but I do have a strong pork threshold haha.

Bangsar Babe, yeah, really disappointed that it's closed too. It was the original Shanghai 10 outlet wasn't it?

Crizfood, isn't it great to know we're never going to run out of new places to try?? :-)

You have been tagged by me, please visit my blog for details. lol

I know food in Shanghai 10 is great however, I still not comfortable with their services at Shanghai 10 Penang Qbay, I was once had an bad experience before. Now seldom visit to that place. Hopefully they will improve their service again.

I try very hard to find the crab roe but I failed, haha. Never been to Avenue K, so shame to tell u that :P

Food Paradise, yeah just read that this morning! Thanks, will get around to it!

Steven, the QBay mall outlet is simply not up to par. They use frozen dimsum :-S

mimid3vils, yeah, crab roe is a bit scarce these days! Have to go for a full-on crab dinner to get to the goodies!