The Fat of the Land, Nambawan, off Old Klang Road

Our glorious land is stuffed to the brim with promise and we know, KNOW this. But buried by political opportunism and citizen inertia, we forget too easily and vicariously extol the virtues of giving up and taking off to faraway lands, padded by the belief that the grass (and meat) will always be greener, fatter on the other side.
I had read enthralled about the highly inconspicious Nambawan off Old Klang Road from Masak-masak's post recently. A hidden pork haven in an area virtually unheard of at jaw-dropping prices, no more than a 15-minute drive from my humble neighbourhood... hello, did Xmas 2010 arrive 11 months early?!
The place was pretty empty when we arrived in the thick of lunch hour but we were undeterred, as we usually were about places that had gotten Boo's stamp of approval! 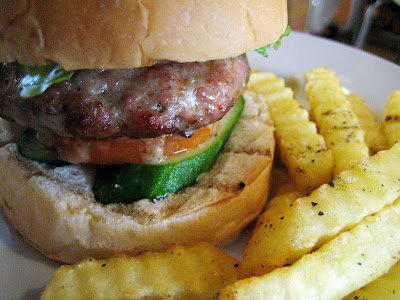 My dining companion Caterpillar, a burger fiend dove straight for the homemade Pork Burger (RM6.90). The serving was a little on the small side, given that he was ravenous. The sight of the untoasted, banal store-bought burger bun didn't help. 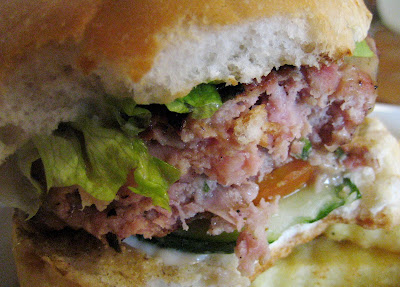 However, one bite into the virgin pink patty erased all doubts. It oozed juice, brass and lustrous flesh, everything we could want to realise the elusive potential of this place we call home, on a remarkably hot Saturday afternoon. 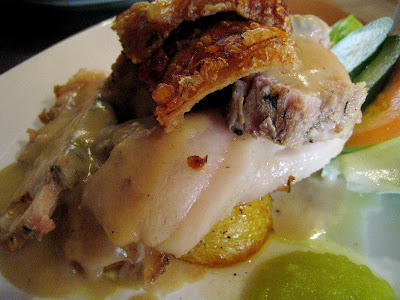 From that delectable snack, there was no way to go for me but one of the weekend specials, Roasted Pork Belly (RM12.90). Slabs of exquisite fatty (like FAT, FAT, FATty) pork layered on roasted potatoes, doused in brown sauce and topped with crunchy pork skin arrived, causing some internal mayhem. At that price, this is a new level of bliss. I didn't think much of the applesauce though, which was a shade of puke-green and tasted underwhelmingly colourless. A bit like the promises that we are spoon-fed, and let down by time and time again. 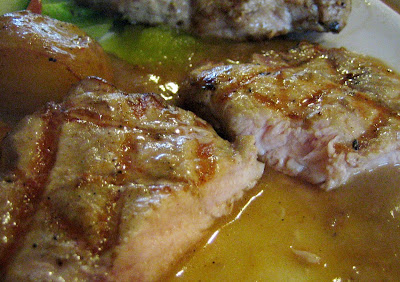 We decided to race for the third main, seeing that the portions were bordering on the side of small and to mix it up, ordered the Stone Charbroiled Pork fillet. The leaner slabs of meat and chewiness were expected but we were still pleasantly surprised by how delicious the dish was.
Caterpillar bowled me over when he declared that he was still hungry and ordered the Homemade Beefburger. I didn't get a picture of it for I was distracted by the host of supermarkets on the street but was informed later by meal owner that the pork burger tasted better.
Clearly, there's wealth in our backyard but we need proper guidance, courage and effort. The location, while a little off the beaten track, was not that hard to get to. Masak-masak's Flickr album has very clear directions.
Posted by minchow at 7:50 PM

wow, despite its puny patty, that burger seems like a steal for that price, considering the nearly RM30 that some other places charge for less juicy pork burgers *cough*cristang*cough*

Your description of the Apple Sauce reminds me of James Joyce's Ulysses. The snotgreen sea, the scrotumtightening sea. Perhaps you should ask the caterpillar if it fits Joyce's description. LOL! The prices are really reasonable and this place certainly demands a visit.

Can almost see the juice oozing out of that burger! You're right...the green in the apple sauce does look unnatural.

Sean - *naughty naughty* I also don't like their burgers. =P

Oooh, we didn't try the pork burger. This definitely warrants a revisit to the place, tucked away off old klang road.

nambawan is Number one! LOL

your description of the burger enough to make me drooling~~

Judging from the pictures, the price seems so reasonable. Drooling over the pork burger picture now..

Sean, exactly! Almost Ramlee burger pricing, but none of those filmsy horsemeat patties. I like!!!

PA, OMG you did not just spout Joyce in comparison to inadequate applesauce! You didn't!

LL, I suppose the shade turned me off more than the taste. I do love my pork with it but applesauce this was not!

Bangsar Babe, I'm actually a bit of a coward when it comes to pure pork fat - I'll worship anything that features it but will stop after a few bites at most.

J2Kfm, yes I think the allusion to being numero uno won't be lost on anyone, haha! The prices are almost too good to stomach!

Boo_licious, these guys really make the most of their pork! How DID You ever find them? I will go back and try at least a few other dishes on the menu.

Ciki, so cute how they named it that right... I mean how more typically Malaysian can you get? So straightforward kiasu and obvious, yet so endearing!

Allie, really super no-frills type of pricing - really a pleasant surprise when it came to paying the bill!

wow you found something waesome here, the burger is a steal, very afordable man! :) come come we go and eat there, I buy you this time! agree?

I see burgers!!
But mayb I'll bring my own bun! LOL.

It is not easy finding such burgers...just yummylicious looking :)

went there 2 years back and looks like the food's still ok. i remembered that the roast pork was yummy :). the pork burger looks slightly raw in the center though..

i sense optimism, pork (obviously..hehe) and pleasure all in one post. cool. i'm quite conservative when it comes to pork. no apple sauce for me, please. just some good old soy will do! having said that, this place sounds interesting!

i love a try on anything to do with pork!!! noted. will have a try

u must try their oxford sausages too..very juicy...i order them as cheese sausages to the lady boss...their sausages r their own recipe thru many trials n errors n are made by their supplier in sg. buloh...ask them to grill the sausage a lil longer for more oomph... read my review here...
http://mormorbunny.blogspot.com/2009/03/art-of-slicing-juicy-sausage.html

wow, porkilicious. actually quite near for me to go for lunch.... guffawing at paranoid's comments AS USUAL.