I'm personally breaking in a number of foreign eating trails and preconceptions this year, quite the glorious start, yes! Guided by noses and tastebuds of eating companions and wonderful people who share as much as they eat, online or otherwise, I'm sniffing out myself some pretty dope discoveries.
For instance, Chilli Pan Mee, the prodigious KL offering, as it turns out, is no longer purely the domains of Kin Kin and arch rival Super Kitchen (both of which churn out mediocre interpretations at best, never mind its origins).
Somewhere in the midst of the gulf between these two lie a handful of places who whip up a better bowl, such as Keong Kei in Old Town (which has since gone missing, sadly). 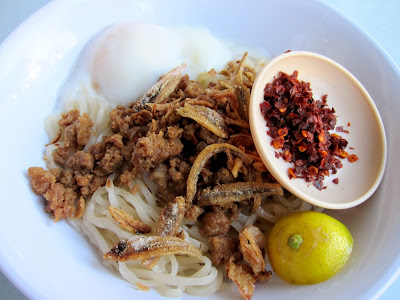 Another player in Taman Connaught kicking the cocky Kin Kins of the world to the curb... 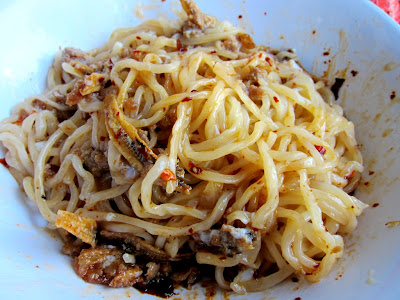 ...is Madam Chiam's, whose version features thin egg noodles, springier than the first bloom of cherry blossoms. Abandon all forms of table etiquette as the sacred bowl is placed before you, but do gently break the perfectly poached egg, mix the wondrous wobbly liquid in with the dry chilli flakes, minced pork and anchovices, take a deep breath and dig in. And don't forget to slurp-ahhhh on your way out! 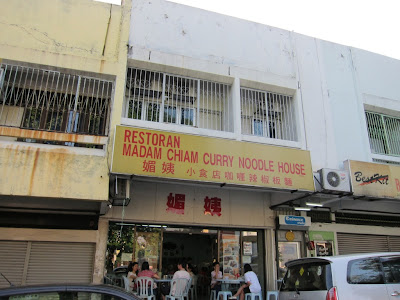 My new favourite Chilli Pan Mee, in the practically transoceanic neighbourhood of Taman Connaught, no less. According to super noodle source Toto, stick to the chilli pan mee for despite its name on the signboard, Madam Chiam's curry noodles aren't too hot.

Ooo. David loves Chili Pan Mee. But Cheras is so far away and the roads are confusing. :S

I actually haven't even tried Kin kin or super kitchen before. Should a pan mee ignoramus like me just skip both of them and sashay straight into madam chiam's fiery embrace, or should I work my way up the ladder and start from the lowest rung? :D

im going to make a date with madam chiam when i get back..ohh glorious pan mee!

Do they serve pan mein in Curry soup? Now that would be interesting. Dem Pan Mein looks really springy ;)

Taman Connaught, Cheras also got good YTF! heck, most of the chinese streetfood is great around here. Cheap too;)

Joyce, come come, Cheras isn't THAT far away from Tmn Desa! You have to get lost once and you'll laugh after why it took you so long to venture forth! :-D

Sean, you could go either way I think and end up at the same place, but personally, I'd rather instant than delayed gratification! :-P

LFB, yes hit it! And it's really not that hard to get to from our neighbourhood too! Face to Face's got nothing on this, I swear!

J, only got my friend's word on the curry noodles but I am certainly tempted to try! Can't be THAT wrong, if the chilli pan mee's anything to go by.

Joe, that list for when you head home must be longer than the length of your entire body now! Good luck!

UnkaLeong, yes they do! They've got the novelty versions too but haven't gotten around to trying those. The other joints who have attempted have failed miserably!

Ciki, now that I'm not a complete tool once I hit Cheras, I'm going to make it a point to eat that neighbourhood inside out, one place at a time!

I also love chili Pan Mee. The first time I taste it when my friends brought me to that place, I said I don't eat it, but they told me to try it and ever since then I started to love it.

Hi John, chilli pan mee can convert the most insistent detractors! :-) Hey if you know of any other good pan mee joints, do share!

Such a nice blog..thanks for sharing..

nice blog.. plenty of food and looks good.. glad to try it..

The noodles takes the cake! it's springy looking alright. Connaught, Cheras.. all those areas tht are still brimming with good food outlets but yet still undiscovered!