Ever get the feeling while on holiday that it's not actually happening? That you're not actually away from your stinky work cubicle, that you're not actually having your first beer at 10AM, or having the day stretch before you to read on the beach and eat seven meals a day and do nothing else? All that disbelief and caution of getting too used to the idea messes with your head good and keeps you from fully living it.

And then before you know it, you're back at the grisly mob scene that is the low-cost carrier terminal, back at work, crushed by deadlines and people and all the horrible things that made you want to pack up and get away in the first place, bemoaning how you let yourself be disengaged during your time on the beach for even one second. 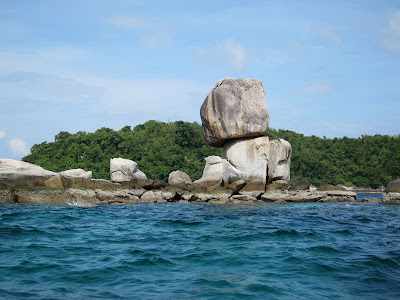 Koh Lipe's a terribly easy getaway for city folks in Malaysia. Just a short flight to Langkawi, and from there a 1-hour speedboat ferry ride. The waters are still clear, the beaches are still relatively clean and snorkelling's still great, barring the current in certain hotspots. 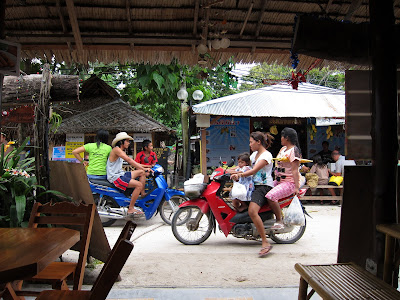 The tiny island is heaving under over-development but for now, it's still a pretty chilled scene, back-to-basics style. Unfortunately, the food options too were fairly rudimentary.

So, upon return to good old KL, propelled by a case of major post-vacay blues, we hit up Bangkok Wasabe, a pocket-friendly alternative within the Kota Damansara commercial maze. 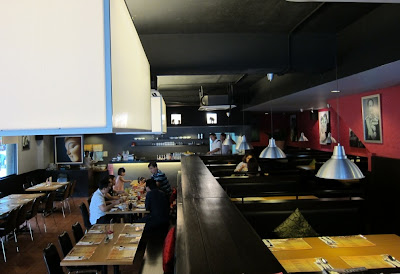 The restaurant interior is air-conditioned contemporary comfort, nothing like the mozzie-infested eating & drinking joints of Lipe. Dark wooden booths, check! I may consider installing one of these babies in my new digs. 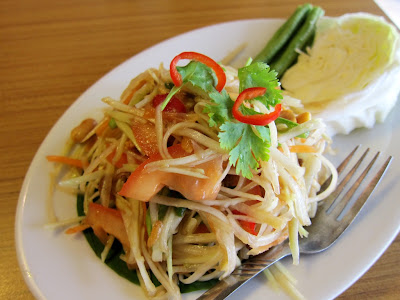 The easy-win Som Tam (RM7) - hit all the right notes! Raw crab was missing though. 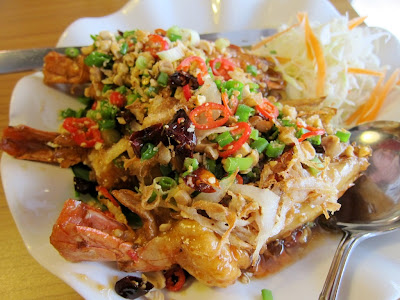 Also recommended by friendly server was the Tamarind River Prawns (RM25), off the menu. This turned out better than expected - prawns were chunky and flavourful and while I'm not exactly crazy about sweet sauces, this struck a sound balance with the ground peanuts and dried chillies. 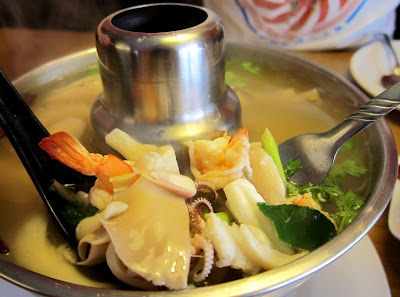 The Tom Yam Seafood (RM15) was decent - more sour than spice, which works just fine with me. The Tom Yam available on Lipe didn't come close to this. 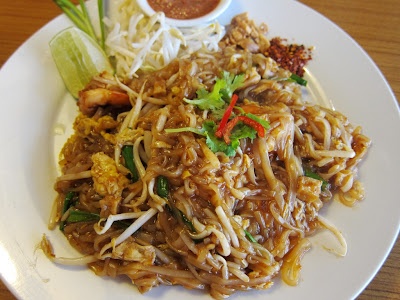 And to cap it all off, not quite dessert but the Pad Thai (RM8) was a tad sweeter than I'd like.

It's no Thai beach but the meal at Bangkok Wasabe was simplicty well-executed and took the bite out of the gruesome return to routine. And more importantly, it served the reminder that there is no time to overthink the holiday when on holiday. Every second of bliss counts!

yeah, we probably have to work almost 250 days a year, which is like 10 times the number of days annually that we'd actually be away relaxing on any exotic vacation (i'm excluding weekends and one-off public holidays). seems so lopsided, eh, that we spend the vast majority of our daylight hours every year slogging away unhappily...
i've been meaning to hit bangkok wasabe for ages, mainly cos i love their cute logo of that fuchsia-ish little elephant! :D

I came to visit your blog. Congratulations.
I invite you to visit my blog “Processo” too. In it there are good Brazilian music, Brazilian modern dance and more.
Vasconcellos Rego (http://processoproc.blogspot.com/)

We LOVE Ko Lipe. We just drive across the boarder and hop on that boat.. and voila! Gorgeous white sandy beaches.. larvely.. :P

Bangkok has amazing scenery. Bangkok is also known as "Venice" of East. Bangkok is very awesome place for holidays. It will be great experience you can enjoy skyscrapers, beach life and tasty sea food, Thai food etc. Bangkok holidays are complete package in point of everything.