One Ballad too many, Decanter Too, Desa Sri Hartamas

Following the string of posts about Decanter Too at Desa Sri Hartamas such as here and here, we visited to see if it lived up to the earlier Decanters' reputation for serving to generations cheap, comforting food & drinks. 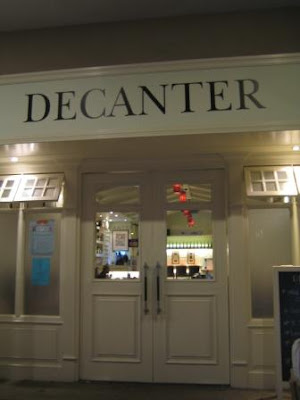 Located on the same row as Fong Lye, street parking is relatively easy IF and only if you get here before 6PM. After that, it's best to just head straight to the open-air paid parking lot behind the KK mini-mart across the road. Decanter Too also neighbours the entrance to the pole-dancing studio on the first floor, so on evenings where we sat at one of the two tables outside, it was only a matter of time before the traffic of fit and fabulous pole-dancing class attendees made us somewhat conscious and sheepish of the boozy feast on our table. 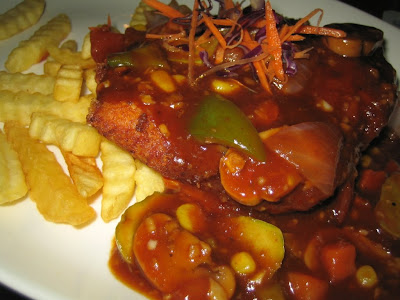 Hainanese Chicken Chop - unrestrained portions and reassuring, but the batter could've been somewhat lighter. Also, this introduced me to my first and recurrent grouse to the food here - too healthy dosing of MSG! 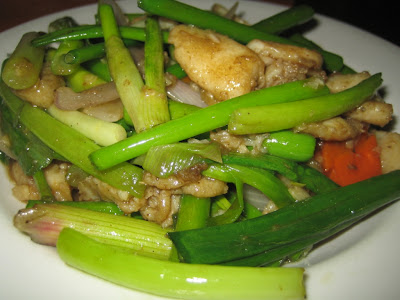 Hui's Stir Fried Fish with Shallots & Spring Onion confirmed the MSG irritant, for she reacted immediately to it with a dull ache at the back of her neck.
Deals like 3 jugs of beer for the price of RM100 nett are too alluring so despite the parched throat in the middle of the night after that meal, I returned the same week. 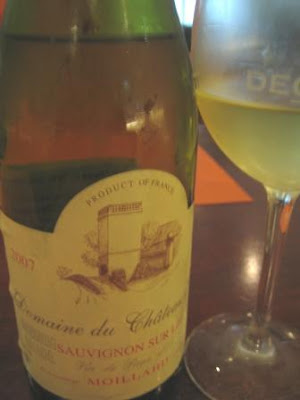 One of the recommended whites by the bottle - Domaine Sur Lie (RM99++). This was too dry for my liking, should've gone for the other recommendation. 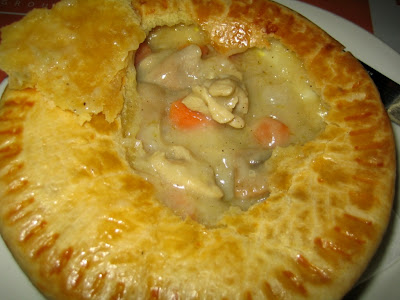 Chicken & Mushroom Pie (RM8) - Somewhat routine, but served its purpose of a light pairing with the wine. 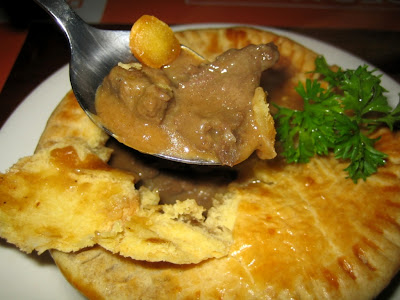 Mel's Steak Pie (RM8) - good with her beer, generous chunks of meat a nod to Decanter's rep for offering value for money. 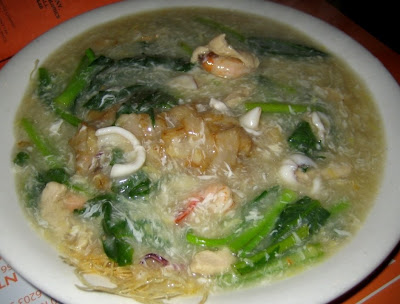 Cantonese Fried Noodle (RM9) - Meal owner N proclaimed it OK-lah, not the best he's had but certainly agreeable at that kind of price.

Oh, one more gripe - when we arrived at a little past six, the music playing was a Scorpions' greatest hits on repeat at a discomforting, piercing volume. The third time we heard the ominous whistling in the opening bar of Winds of Change, we requested for a change in music, only to be replaced by yet another equally nauseating greatest hits compilation. No music snub intended, but Scorpions at a dining outlet like Decanter's is akin to playing opera at a night club. Or K-pop at a cocktail reception. Or Wu Tang Clan at a wedding solemnization. Oh wait, that could work. Anyway, point is, given the cosy ambience, they ought to give the kind of music they play some thought.

I'm indifferent to the food, but the pricing's reasonable, drinks cheap, the service fast and attentive ('cept for the music, y'all), an outlet that I wouldn't mind coming back to.
Posted by minchow at 2:00 PM

this is the only decanter that i know how to find! the others seem too well-hidden in housing areas without any straightfoward directions. or at least not as straightforward as following the moskva down to gorky park. :D

Gahahahah! Moskva down to gorky park, farny!! Yes, yes Faith, we'll definitely b heading there again for friendly neighbourhood drinkies :p
Ooh ooh, Delicous Dua has an EXTENSIVE drinkies list with prices that puts a smile on my face. Our destination NEXT!

Thanks to you, I now have Winds of Change playing in my head. Aarggh.

(Oh, I still dunno where this is. I only know the one in Damansara Heights; not sure if the menu's the same. Any idea?)

Nowadays MSG is common in outside food, we just can hope that they just use the minimum dosage of MSG :P

I think they make more from drinks than food!? I disk]like MSG. If I come home with a parched tongue it will be the last trip for me.

I miss the old decanter i.e. the original one with the 2 prickl sisters though - one of my fav places for fried beehoon, fried cantonese noodles and chicken pie.

i passed by this outlet while getting lost somewhere in mont kiara area. yeah, i'm champ in gettin lost.

no comment on the food, but i hate Scorpions. =P not even Wind of Change. therefore i can fully understand your frustration. hehe

I stick to my Cantonese fried kuay teow, which is mediocre but for that price, I can't complain... ;)

Sean, HAHAHA! You got me, the only other one I've been to is the Sec 17 one. The route there's definitely Scorpion-straight!

Mellie, OK, good to add to the list. But not this weekend though...we're thinking of hitting Changkat area this weekend :-D

Nomad Gourmand, not really ideal for just the food, esp if you react badly to MSG.

LL, eeps! I really wouldn't want to be the cause of that! As far as I know, menus are fairly similar with some slight variations.

Allie, I understand why some outlets need to resort to MSG but they don't need to be soooo generous with it :-S

Worldwindows, I wonder if they take the same approach at their higher end outlet Courtyard Garden. I had fond memories of my one and only meal there, no untoward MSG incident that I can recall.

Ciki, hehehe, I'll have you know your blog post tipped me off and I was on lookout all night OK! Eventually he turned up, and almost, almost made Scorpions bearable! :-D

J2Kfm, you can't miss this place, it's the first thing you see when you turn into Desa Sri Hartamas. But since Scorpions is such a bane, you might want to get "lost" just to maintain sanity!

Haven't heard of this place at all, not too familiar with this area I guess. But the food looks good esp the chicken and mushroom pie. Thanks for introducing!

These evening romps are good for the tomorrow's challenges , as long as the decanter in you stays on course & centers
hahaha !

I tried the Miami Baker's pie in WA the other day. It's yummy cuz the pastry is so well baked.

Too much MSG? Ah... can not tahan really much!

you know, it could really work! haha!

but yes, it's rather subjective. i once had hokkien mee at decanter and man, was i wutangclan-ed..haha! ok, i was there for the wi-fi..hehehe..

At times after long exposure to outside food I just wish to have cheng choy bak zhuk at home. :)