Last day to 2011. WHOA.
One of the most remarkable (and hardest) things done this year had to be our journey to Bhutan. I had to at least say something about it before hotfooting it over to the other side.
Rather than choose to celebrate the aftermath of our marital union the sensible and relaxing way, we decided, to hell with chilling by the beach sipping a Mai Tai, let's blow all our cash and hit Bhutan! 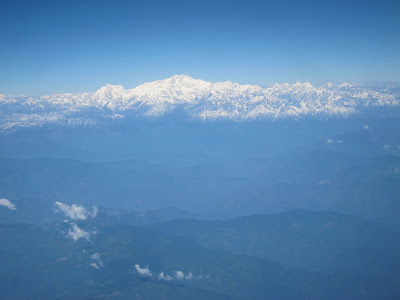 'The jaw-dropping Himalayan stretch greets you in flight even before descent
Of course, we weren't expecting to put our feet up, having done months of research beforehand and thoroughly expecting the bare minimum of creature comforts and rigorous tests to our fitness levels. The truth is, there was no way we could have prepared enough for an experience this different. 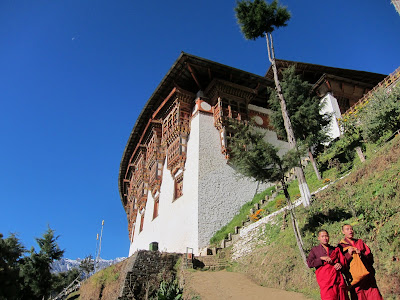 Tango Monastery, Thimphu
Any discomfort and the exhorbitant price tag that comes with a trip to Bhutan are all but the negligible price to pay to witness this tiny kingdom at the cusp of major transformation, as its pastoral beauty and way of life makes way for planned development, which had hitherto been firmly controlled. 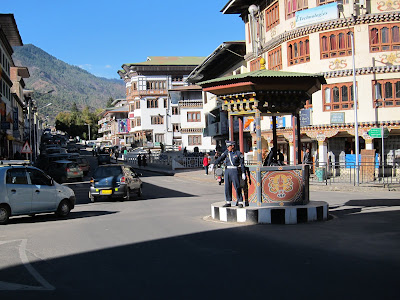 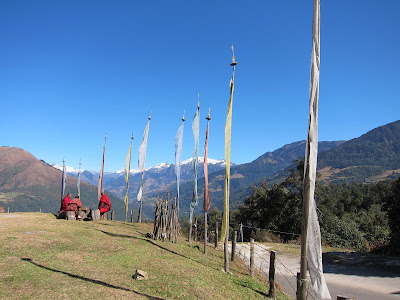 En route to Punakha after descent from Dochula Pass
Apart from the ridiculously picturesque landscape (which remains acutely unnatural to the untrained eye from infinitely uglier cities), the other thing we wanted to get our heads around when we embarked on the trip was Bhutan's acclaimed Gross National Happiness (GNH) concept. 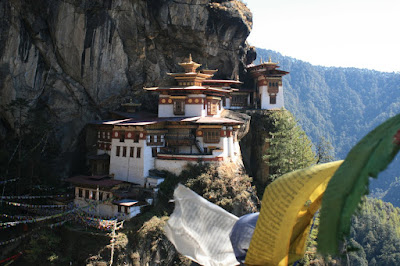 Taktsang Monastery or Tiger's Nest - prevailing myths and legends not withstanding, this is a magnificent piece of architecture.
While there is plenty of literature on GNH's use in measuring Bhutan's sense of well-governance as an indicator of progress, it was difficult for us mere children of capitalism to grasp how it would feature in the average life of a working Bhutanese. Fortunately, our guide Dawa did not shy from sharing his thoughts with us about this.
While Bhutan has gained repute from being the poster child to GNH, a concept that is being studied by academics and politicians alike all over the world, it remains just that - a concept. For an abstract index that claims to measure how secure and happy people feel about governance, it is treading on uncertain grounds, given the development of democracy in Bhutan. For majority of Bhutanese, who have only in recent years seen the introduction of democratic elections, and who still ardently aggrieve the abdication of their former king (the beloved Fourth King passed the crown to his son, now the Fifth King in 2008), GNH does not necessarily assure happiness.
His personal opinion aside, Dawa does feel though, that as the young Fifth King gains his footing and as the country's democracy matures, Bhutanese will reclaim that coveted brand of intellectual progress as a Kingdom.
Since our return, I've also read with interest some other dissenting views on GNH, particularly around the issues of the expulsion of ethnic Nepalese and rise of consumerism. If you're up for some more reading on how the youth of Bhutan features in all this, this paper might be of interest.
In any case, it's an interesting topic that will continue to see plenty of argument, and one on which I will keep close tabs. Our time spent in Bhutan merely scratched the surface but we certainly didn't experience anything other than warmth and friendliness from the government-sanctioned tourist quarters. 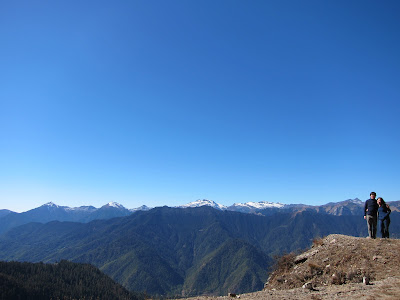 The Happy Honeymooners, at Chele La Pass, highest point in Bhutan at 3988m above sea level
Will be thinking more about this for sure. GNH or not, happiness in all its vagueness is too individualistic and personal to dilute into some kinda common denominator report card.
Not the last about Bhutan you'll hear from me! Will definitely be a post on food and drink (most of which didn't quite agree with me!).
Until then, have a Happy New Year, beautiful ones! See you in 2012!
Posted by minchow at 10:00 AM

Ah, Bhutan! It's to me what Machupicchu is to Devil... Our dream travel destination...

what an experience of a lifetime this must have been. and what an appetite-whetter of a blog post ... can't wait to read about whether you tasted (and enjoyed) yak meat and cheese, heh.
i'm not an intrepid traveler, so i tend to stick to destinations where trains and cabs offer easy transport everywhere, and there's always an italian restaurant to duck into for safety.
may 2012 offer more adventures & even more happiness to both of you. yeah, we probably can't measure happiness, and it's elusive enough that any measurement might change faster than the weather in KL. but i guess the best we can do is recognize and appreciate it when we feel it :D

More Bhutan post please!
I certainly would visit Bhutan myself one day!

Wow! Jealoussss!! What a fab trip! Will need you to do a guestpost for me di.. can?

Sean, thank you! All the very best in 2012 to you too! Bhutan was definitely quite an experience, but let me downplay your expectations on the appetite-whetting part... austere would probably be the word for it :-P

Rebecca, yes m'am! Coming up as soon as I get over these NY starting work blues!

Julian Si, thank you so much and Happy New Year to you & family too!

Ciki, there were challenges involved in getting to fab, trust me! Would be happy to do guest post, just gimme some time to put it together, cool?!

Wow, the country looks as good as it's King wei ;)

Congrats to the newly weds. Why so small one the last pic? :P

It is where the gods lives.

UnkaLeong, tell me about it! The King's (and Queen's) mug was all over the landscape too - certainly a key tourist attraction!

Massachusetts Florist, if the myths and legends that shroud their culture are anything to go by, they certainly do!

wow, you had a holiday in bhutan.
my aunt went last year/last last yr (can't remember) too!
the view and all are fascinating but not the food. that's what she told me