One particular Saturday, I had wanted to push myself a little beyond my usual repertoire of hungover hibernation so I lined up appointments back to back, only to find myself constantly out of breath and running late from one place to another. I arrived late at Pho Hoa, second stop of the evening, for a review, courtesy of invitation from Sidney from Big Boys Oven.
I had actually been to the Pho Hoa outlet at the Curve about a year ago and walked out sorely disappointed by the meal then. Everything I had expected from a Vietnamnese bowl of noodles - the steamy, fragrant broth, interspersed with the delicate assortment of fresh herbs, bestowing the comfort of old, seasoned kitchens - did not materialise. In fact, the meal consisted of two dreary bowls of limp rice noodles swimming in LUKEWARM flavourless broth. Needless to say, when the invitation came to visit its new outlet at Tropicana City Mall, I was curious to see if this was going to be a repeat of that insipid experience. 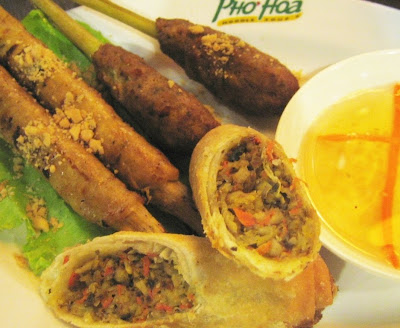 We were served a selection of their three appetizers (sold separately) consisting of deep fried Vietnamnese spring roll, lemongrass chicken and fish cake. Even though the spring roll appeared the most pedestrian, I found the flavours interesting because it wasn't your standard radish filling. Found out later from the manager Dennis that the filling was a mix of minced chicken, yam and carrots. I tasted anise too, along with a host of other spices. 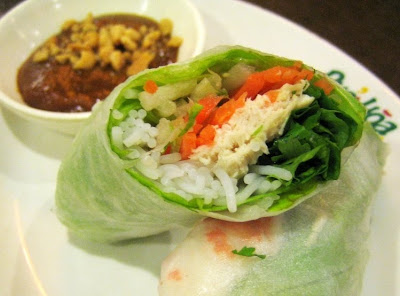 The standard Vietnamnese rice spring rolls, served with a sauce that was heavy on the fish sauce. This was alright but I've had better. 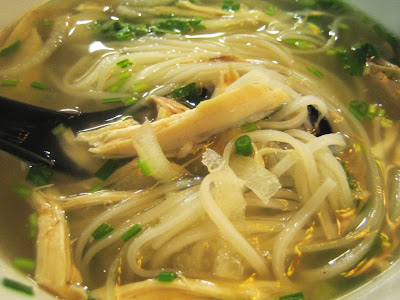 I requested for the Pho Ga or Chicken noodle soup, since I didn't do beef. With my last Pho Hoa experience clearly in mind, I really appreciated that this time, the rice noodles were cooked just right, still offering plenty of bite and spring. This was served with a hot chilli sauce which I learned was to be dumped into the bowl from the start, together with the raw bean sprouts and basil. 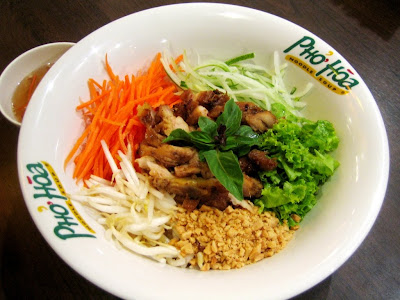 Next came individual bowls of Bun Ga Nuong, grilled chicken served with plenty of fresh vegetables, crushed peanuts and vermicelli, with a light fish sauce-based dipping sauce. I would have liked to enjoy more of this but by this time, had consumed almost three quarters of the full bowl of chicken pho that I had to leave this unfinished. 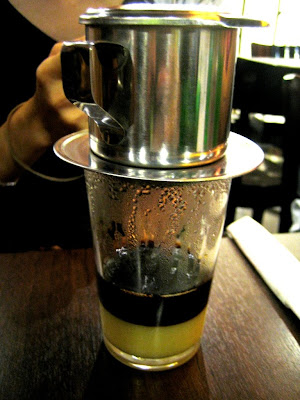 Vietnamnese Coffee, served in the single-cup filter. Some of the others at the table enjoyed this enough for seconds. 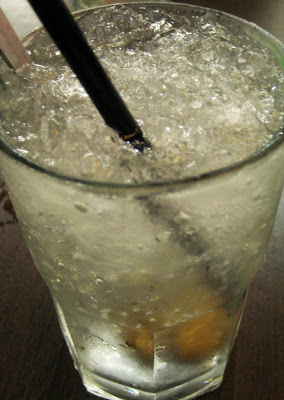 When asked for recommendation to quench this out-of-this-world thirst I had acquired from earlier studio session, Pho Hoa's staff pointed to the Salty Plum Soda. It worked! 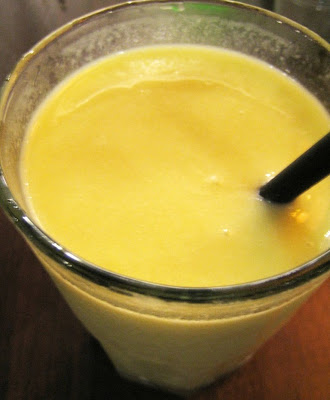 Some went for Blended Avocado Juice. I can't be sure what the blend was but it sure looked a shade too yellow to be pure avocado. 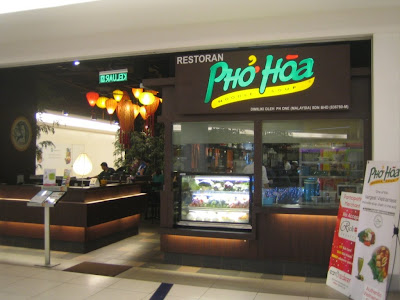 Apart from the generous portions which were more than enough to keep me going for the next couple of appointments until the wee hours, I was also pleased to find that the earlier experience at the Curve's outlet was not entirely representative of Pho Hoa's potential. Also discovered a couple of other hits on its menu, beyond just noodle soup.

Pho Hoa's outlet at Tropicana City Mall is located on the first floor, on the Borders' end of the mall.

Thank you to Dennis and team for hosting and to Sidney once again for the invite!
Posted by minchow at 10:20 PM

yeah, i remember having a kinda forgettable dinner at pho hoa's outlet at the curve a few years back, though there was nothing wrong with it per se. but yeah, that's the strangest avocado juice ever! it's gotta be mango ... right?! :D

viet cuisine! i would love a try!!! love the healhty and light idea from viet cuisine

Blended Avocado Juice looks like mango juice! yarmie.. if it is thick and sweet;)

yup, too yellow to be pure avocado. unless it's too ripe? or another species? :)

had pho hoa once, didnt shout "boomz"..haha never went back..

wow it was great meeting up with, :) sorry for the istaken identity!

I had a meal there once, and liked the chicken salad thing the most!
The noodles were a bit small in portion but the whole plc was manned by myanmar? Viet? workers. No local in sight.
Must be why the taste is not consistent

You know it was my first time eating those pho with chili sauce dumped into the soup! Interesting indeed.

I miss Vietnamese food already ;) Can't wait to try all of these. But I don't fancy viet coffee. Too strong for me, cos I'm no coffee lover. what a waste, rite? haha ;P

We do not have high marks for Vietnamese Cuisine, we think they are bland and very below the spiky mountain under the green valley offerings which do not evoke strong feelings errr except maybe the demure petite lady waitresses ?

i heard the same -ve review on the other branch, hence i was not too keen to try. looks ok, food seems more northern than southern viet. do they have blended ciku juice? i enjoyed that in vietnam *slurps*

Wow Pho Hoa is everhwhere, I just realized a few years ago that Pho Hoa is a chain. A safe way to explore Vietnamese food however. Glad you enjoyed the experience.

Sean, yeah it was a perfectly adequate meal for me too, but not mind-blowing. I checked with one of the others who had the juice and she insists it's pure avocado!

Ai Wei, I always like how I'm guaranteed my share of fresh veg at a Viet meal!

J2Kfm, I ought to study avocado species myself. I'm so in love with the fruit that it's a crying shame I don't have encyclopaedic knowledge of it!

Joe, haha, despite the pleasant experience this time around, BOOMZ hardly comes to mind, and doubt it ever will!

BBO, mistaken identity on my part, not yours! I was so mortified to have scared Sunny haha!

TNG, ooh not sure about the staff in the kitchen though. I'd stay far away from the Curve outlet in any case.

Food Paradise, Penang's catching up too!! I've still yet to try that outlet at E-Gate. Spending way too little time in Penang!

Allie, that's what I expected too, but I suspect it's just a different type of avocado that I wasn't aware about.

Iamthewitch, yes, what fantastic things we learn at sessions like this, huh?? :-)

Christine Leng, Viet coffee's in a league of its own! Nothing like the drippy flavours from the mass coffee chains. I want to get myself one of those Viet coffee filters!

When Pho Hoa had their only outlet in Plaza Mt Kiara - it was my to-go-to place whenever it rained. Wasn't the best but very comforting for me, since it was near home.

Cool post as for me. It would be great to read more concerning that theme. Thanks for sharing this data.
Sexy Lady
London escorts