Burning for the Burn at Santai, TTDI

Deepavali AM: Fresh off another gregarious Friday evening at Sid's, a few of us set off on the utterly unreaslistic hunt for banana leaf rice, neglectful of the fact that the Festival of Light is in fact, a significant day for our Hindu brothers and sisters that warrants a real holiday.

Seeing that I was going to be in TTDI for a couple of property viewings (yes, yes, STILL STILL viewing), the girls decided to hotfoot over to the area for lunch. With BLR fail inevitable, Eevon suggested Santai for tomyam. 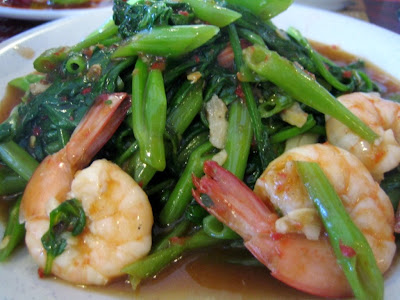 We decided on splitting a few dishes among the four of us. The portions had arrived looking somewhat on the small side, but transpired to be just nice once we tucked in. The Sambal Kangkung featured some tasty, plump and fresh shrimps but I would have liked it a little spicier. The right level of BURN is an absolute necessary element for hangover sustenance. 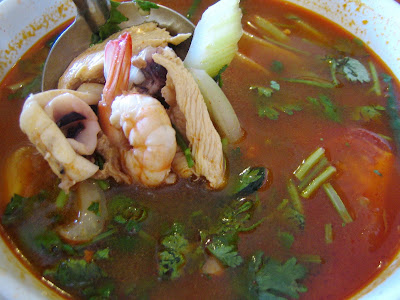 The meal centrepiece arrived shortly after. We ordered the Tomyam Campur and they weren't kidding about the Campur bit - seafood, chicken, beef slices?! I don't believe I've ever seen beef used in tomyam. This was a lovely sweet broth, but once again, not enough BURN for me. 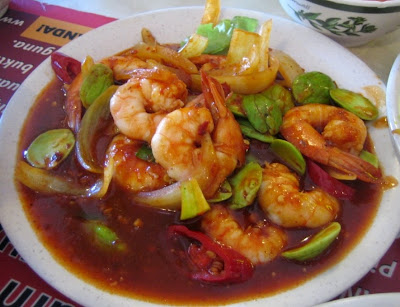 If Petai is on the menu, I cannot possibly ignore it. We chose Sambal petai with prawns and again, it arrived generously a prosperous serving of juicy prawns. Crazy burn factor still missing though. 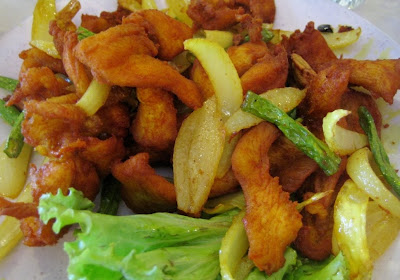 Ayam Goreng Kunyit was a bit of a miss for me. The chicken slices were a wee bit too dry and I thought the punch from turmeric, surely one of the most interesting spice to be paired with chicken, fell short. 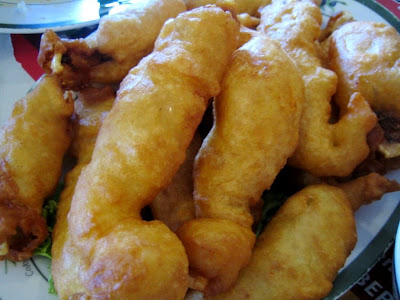 We also ordered these very stoic-looking squid fritters, with batter making up about 80% of the dish. Good when in the mood for that munching on greasy carbs. 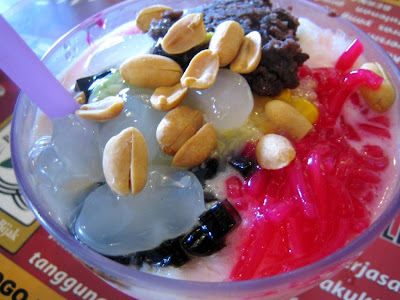 Once the empty plates were cleared, post-script of last night's conversation ensued for another couple of good lazy hours. The other three ordered the Ais kacang (although they were told that Santai was out of gula melaka that morning). I was told it was delightful, the gula melaka barely missed. 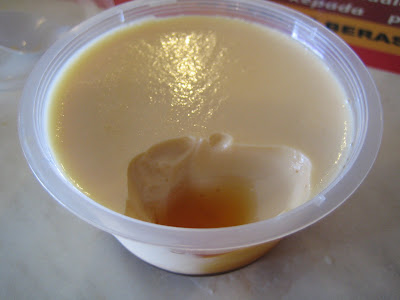 I had intended to stick to my usual no-dessert position but I was drawn to the tubs of Creme Caramel sitting in the fridge and snagged myself one, about an hour after lunch. I think it would have been better if it had been turned upside down but not complaining, no siree! 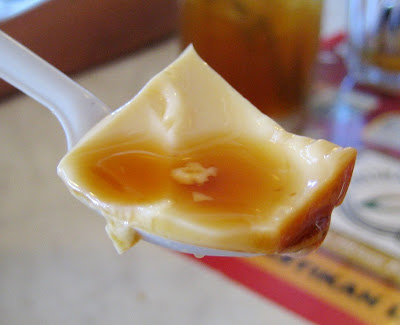 This version of creme caramel held its own, considering I ate it straight out of the tub with a plastic spoon. Loved the look of congealed caramel at the bottom of the tub. Ahh, the golden elixir of joy! Not even the fact my hangover burn quota didn't get filled could contain my delight! 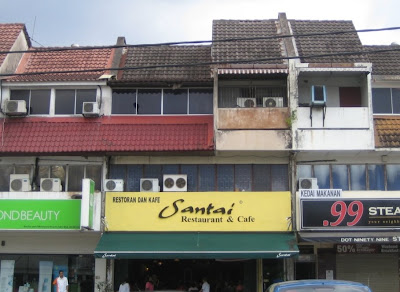 Santai is very affordable and very dependable Malay dining. It is no substitute for the BLR burn on hangover mornings but it guarantees a good, solid meal.

Located at Persiaran Zaaba, next to .99 Steak & Chops in Taman Tun Dr. Ismail, it frequently enjoys high traffic of families, yuppies and demi-celebs hiding behind oversized sunnies and acne-ridden teenagers whiling away afternoons over cans of Coke and ais limau.
Posted by minchow at 7:00 AM

There's a crazy queue for Nasi Lemak in the mornings. Have yet to try this place lar. Will make an effort to do so ;)

Over the years this has become one of my favourite Malay eateries. They are just so dependable that they can never go wrong. My faves here are the Kailan Ikan Masin, Daging Masak Merah and the Ikan 3 Rasa. Yumz despite knowing the amount of MSG that's in there. LOL

thanks for the heads up.
been wanting to try some good Malay food that's NOT overpriced in KL.
kinda sick of the usual western fare, and fast food outlets.
and my knees go weak at the sight of petai as well.

heard about this place ... but haven't got the chance to .. thanks for sharing!!!

i oso burn this weekend. burn.burn.burn. Velly good or.. :P

sigh, this is on that long list of ttdi outlets that i've been meaning to visit since forever ... santai, 99 steak, alicafe, baiti's, claypot brothers, homst, june thai, kozee, mama's kitchen, muhibbah, namaste, shalome ... u can see it's gonna take quite a few trips to do 'em all...

I love the telur bistik here, comfort food for me and yup, the daging masak merah. Plus chilling out on a hot day with the very sweet ais kacang. Hang out place for both of us, since the pet shop we get kitty food is round the corner.

Time to drag Shum here for lunch. Will let you know when we do! =D

Santai!
Like I told Unka, darn long queue for NL in the mornings.
And dining with police and celebs here are the norm! ;p

they r so good? hmm after hanging out in TTDI for almost 3 years, i can't believe that i never makan in santai before. lol.

i see lots of prawns! haha.

Unka, I haven't tried the NL either. Must be well worth the queue - I ought to wake up extra early one of these days for it!

Qwazymonkey, MSG right?? Crazy thirsty after the meal, but not quite enough to write this place off! Ikan 3 rasa sounds good - OK next visit!

J2Kfm, yeah really decent prices here. They also have a lot of Malay cakes & cookies on sale, perfect to finish off a petai OD!

Duckie, next time you're here with hubby, do make a stop?

Ciki, what was your burn source?? Anything like your crazy Taiwanese hotpot? You know, actually, that's a PERFECT hangover meal!

Sean, see, all the reason for me to move to TTDI! I haven't gone to most of the places you listed either! On with the property hunt!

Boo, I saw a lot of other tables ordering omelette dishes! We couldn't fit anymore on the table but I am DEFINITELy going back for some eggs!

Bangsar Babe, yeah odd to find beef in tomyam!! I probably won't be after the tomyam again here but after the comments here, so many other things to order from the menu!

Nomad Gourmand, ooh didn't see any cops but a lot of folks who looked like they COULD possibly be on telly. Not that I'd be able to tell the difference!

Xin, TTDI is such an awesome neighbourhood. I can't stress that enough!!

shudnt blr be straight after the drinks ar? haha help it settle down abit better?

Joe, BLR right after drinks would be perfect in the days when I would still insist on eating after drinks. This day, can control sikit till the next day! :-P

Joshua, hello, thanks for dropping by! Prawns can never do me wrong!

Nic, oooh that means liver in mee goreng too? Now, that I have to see! And taste!

wah the squid fritters look very exotic like the man's private part leh. Is that the signature dish at Santai? Please bring me there when I go down KL :)

This is really fiery hot and spicy.

Can't go wrong with combo above :-) I assure you!!