A table at Seed Cafe Mid Valley has just never quite lived up to the promise of a table at say, Delicious or Chillis on the same row. Not even when the mall is packed beyond belief during the sale season.

It's by no means the best place around - far from it, in fact. To begin with, there is no alcohol served. Secondly the dessert selection is poor, and the cakes at the counter always look quite dire. But it has a couple of tricks, which we frankly love.
The Good: 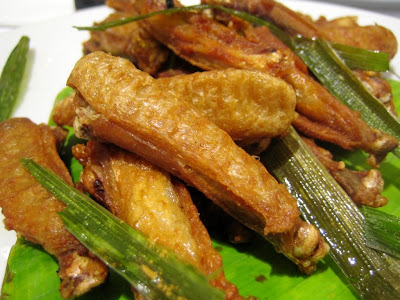 Top of the list - Screwpine Chicken! These are chicken wing halves fried to a golden crisp with strips of fragrant screwpine leaves. I can't think of a much better way to eat chicken wings! They should open franchises just selling this. Or have a Screwpine Chicken kiosk next to all the Seed stores nationwide. 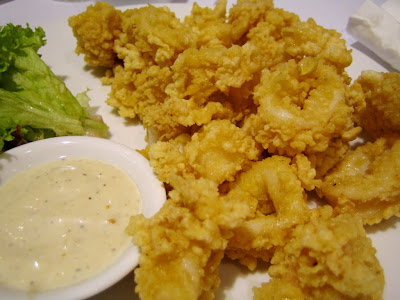 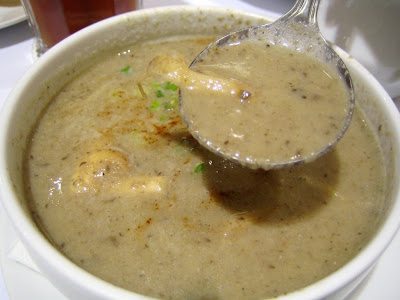 We also like the Mushroom Soup - huge chunks of mushroom swimming in thick hearty soup. A bowl of this + the screwpine chicken and all of life's problems, which had seemed so immense just a minute before, are forgotten quite magically.

Apparently, the Hainanese Chicken rice (which is a HUGE serving), the Cajun Chicken Chop and the tomyam seafood pasta also get the ticks here.
The Not-so-Good: 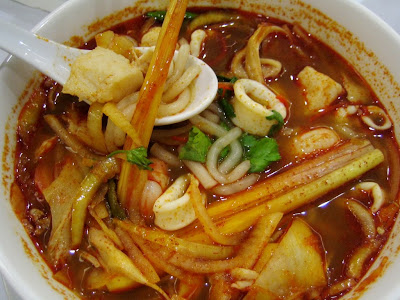 Tom yum noodles - they serve these with rice vermicelli (meehoon) but I asked to substitute with lai fun (or laksa noodles). While the soup grudgingly satisfies the instant tomyam craving, it's several notes too heavy on the MSG. While there were plenty of prawns & squid in this, the fish slices had obviously been doing time in the corner of the freezer. 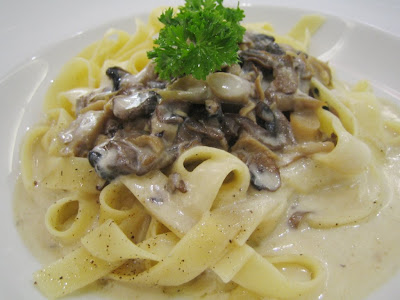 When I dined here once with Mel, she'd ordered this fettucine with what was supposed to be a carbonara-like sauce, with mushrooms. She was sore that the sauce tasted like it had come straight out from a can, prettied up with some cooked mushroom. Fail!
I know what and what not to go back for!
Posted by minchow at 9:00 AM

Screwpine Chicken Wing is one of their best... Missed the food there. :)

i remember trying some vaguely interesting DIY dish here before but have forgotten what it actually was. yeah, the food is hit-or-miss, though i like the ambience.
the lag on google reader is so annoying. u posted this at 9 a.m. but it only appeared on my feed at 1 p.m.

never bothered dining there as well, compared to the OTHER more famous Ms Read's Delicious.

Wah, liddat means the menu is very dangerous - depending on luck the food can either be delicious or really bad....

haha, thanks for all the great tips. and i know what to get for myself on my visit. and will do it til they have cut off sidcount coupon from female magz. ehehehe

Went there long time ago, didn't really impress me...

The chicken wings look delicious to me. Want to try this out! ^-^

noted. pandan fried chicken and calamaris it is then if i ever do pop over :)

but quite dangerous lo... if so coincidentaly I went there and the chef's mood is not good, then i'm sure to get the burnt calamari? LOL

Yet to visit this place. Sure going to try out the Screwpine Chicken when I do drop in.

Screwpine chicken wings? But I can hardly see the wings. Drowned in batter?

Thanks for the tips ya :)

The food looks good and the mushroom soup, just can't take my eyes of it. Good for the soul!?

surely when the screw hits the pine some seeds will be lifted to high heaven ? Yeah even if its only one or 2.

Indeed we only look for one good one

NKOTB, yes I remember seeing it on your blog quite some time ago! Good huh??

Sean, the place's a bit more subdued away from the mall rush but the service is quite dire. And the air conditioning also needs a service!

J2Kfm, oooh!! You just reminded me... attack of the Delicious choc cake craving!! Remember that one post of yours! Die, diet, die!

Ai Wei, got coupon in Female?? Are you sure it applies to the Cafe and not just the clothing store?

Superwilson, very difficult to be impresed by F&B outlets in Mid Valley. Unfortunately, I work here and have to make do at least 5 meals a week :-(

Food Paradise, hmmm getting late afternoon munchies now too. But can't go satisfy this craving or I'll spoil my appetite for dinner later!

SC, yes, I think sticking to those two should be fine. Mind the overdone calamaris though...

Allie, perhaps I keep missing the Chef's good days! You should visit and see if you have better luck.

CK Lam, must do! Skip everything else but the screwpine chicken you musn't!

LL, haha, there's not a whole lot of batter... somehow the picture of the wings made them look...glossier somewhat

Nic, I don't know if this is in line with Colonel Sanders' direction of "healthier" fried chicken, HAHA!

Will look out for that screwpine chicken! :)

The chicken definitely looks so yummy, no wonder it's the top of the list :)

hard to find a place tht does Pandan chic well! Hv to go even if its just for this!
Mayb i'lltry the Seed cafe at Sg Wang..

Selba, it is the best thing here! The next best thing (calamari when cooked right) is a far second...

Nomad Gourmand, there's a Seed Cafe in Sg Wang too? Wow, been too long since I've been there!

Mimid3vils, no worries! Did you pop yet??

Ooh that begs the question, why the name screw pine? Googling right after this!!

no alcohol gets a straight no no eh?